A wonton (also spelled wantan, wanton, or wuntun in transcription from Cantonese; Mandarin: húntún xwə̌n.tʰwə̌n) is a type of dumpling
Dumpling
Dumplings are cooked balls of dough. They are based on flour, potatoes or bread, and may include meat, fish, vegetables, or sweets. They may be cooked by boiling, steaming, simmering, frying, or baking. They may have a filling, or there may be other ingredients mixed into the dough. Dumplings may...
commonly found in a number of Chinese cuisine
Chinese cuisine
Chinese cuisine is any of several styles originating in the regions of China, some of which have become highly popular in other parts of the world – from Asia to the Americas, Australia, Western Europe and Southern Africa...
s.

Wontons are made by spreading a wrapper flat in the palm of one's hand, placing a small amount of filling in the center, and sealing the wonton into the desired shape by compressing the wrapper's edges together with the fingers. Adhesion may be improved by moistening the wrapper's inner edges, typically by dipping a fingertip into water and running it across the dry dough to dissolve the extra flour. As part of the sealing process, air is pressed out of the interior to avoid rupturing the wonton from internal pressure when cooked. 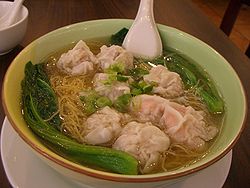 Wontons are commonly boiled and served in soup or sometimes deep-fried. There are several common regional variations of shape.

The most versatile shape is a simple right triangle, made by folding the wrapper in half by pulling together two opposite corners. Its flat profile allows it to be pan-fried like a potsticker in addition to being boiled or deep-fried.

A more globular wonton can be formed by folding all four corners together, resulting in a shape reminiscent of a stereotypical hobo
Hobo
A hobo is a term which is often applied to a migratory worker or homeless vagabond, often penniless. The term originated in the Western—probably Northwestern—United States during the last decade of the 19th century. Unlike 'tramps', who work only when they are forced to, and 'bums', who do not...
's bindle
Bindle
Bindle is a term used to describe the bag, sack, or carrying device stereotypically used by the commonly American sub-culture of hobos. The person carrying a bindle was called a bindlestiff, combining bindle with the Average Joe sense of stiff....
made by tying all four corners of a bandanna together. The much larger Korean deep-fried dim sim
Dim sim
A dim sim is a Chinese-inspired meat dumpling-style snack food popular in Australia. The dish normally consists of a large ball of pork or other meat, cabbage and flavourings, encased in a wrapper similar to that of a traditional shumai dumpling. They are usually deep-fried or steamed, but can be...
has a similar shape, but wontons in this configuration are more commonly served in soup.

A related kind of wonton is made by using the same kind of wrapper, but applying only a minute amount of filling (frequently meat) and quickly closing the wrapper-holding hand, sealing the wonton into an unevenly squashed shape. These are called xiao huntun (literally "little wonton") and are invariably served in a soup, often with condiments such as pickles, ginger, sesame oil, and cilantro (coriander leaves). 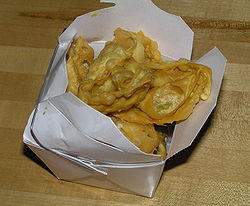 Each region of China has its own variations of wonton, examples include Beijing, Sichuan, Hubei, Jiangnan, Jiangxi, Guangdong (Cantonese), Fujian, etc.

In Cantonese cuisine, shrimp filled wonton within minced pork is most commonly served with thin noodles to make wonton noodles. It may also be consumed with red vinegar. The soup is made from boiling shrimp shells, pork bones and dried flounder to give it a distinct taste. MSG
Monosodium glutamate
Monosodium glutamate, also known as sodium glutamate or MSG, is the sodium salt of glutamic acid, one of the most abundant naturally occurring non-essential amino acids....
may be added to enhance the flavor. Hong Kong wontons were introduced to the area after World War II
World War II
World War II, or the Second World War , was a global conflict lasting from 1939 to 1945, involving most of the world's nations—including all of the great powers—eventually forming two opposing military alliances: the Allies and the Axis...
as street food and later indoor eateries.

In Sichuan
Sichuan
' , known formerly in the West by its postal map spellings of Szechwan or Szechuan is a province in Southwest China with its capital in Chengdu...
, semi-pentagonal wonton are known as chāo shǒu (抄手, lit. "crossed hands" ) since after initially folding the wonton skin into a right triangle, each end of the hypotenuse are pressed against the middle of opposite sides, creating an impression of crossed arms/hands. These are often served in a sesame paste and chili oil sauce as a dish called "red oil wonton" (红油抄手).

In Shanghai and its surrounding area (Jiangnan), Wonton filling is most often made with minced meat and bok choy
Chinese cabbage
Chinese cabbage can refer to two distinct varieties of Chinese leaf vegetables used often in Chinese cuisine. These vegetables are both related to the Western cabbage, and are of the same species as the common turnip...
served in chicken soup; however, Shanghai cuisine makes a clear distinction between small wontons and large wontons. The former are casually wrapped by closing the palm on a wrapper with a dab of pork and vegetable filling as if crumpling a sheet of paper. These are popular accompaniments to breakfast or brunch fare. The "large" wontons are carefully wrapped (often resembling a large tortellini
Tortellini
Tortellini are ring-shaped pasta. They are typically stuffed with a mix of meat or cheese. Originally from the Italian region of Emilia , they are usually served in broth, meat broth, either of beef, chicken, or both...
) and a single bowl can serve as lunch or a light dinner. They are available with a large variety of fillings; a popular Shanghai fast food chain offers more than 50 varieties. One popular variety in Shanghai which is said to have originated in Suzhou is "three delicacies wonton" (san xian hun tun)which contains pork, shrimp and fish as primary ingredients. Wontons in Jiangnan are also made with Shepherd's purse
Shepherd's Purse
Capsella bursa-pastoris, known by its common name shepherd's-purse because of its triangular, purse-like pods, is a small annual and ruderal species, and a member of the Brassicaceae or mustard family...
if the recipe does not use Bok choy.

Ningbo Wonton has two types, steamed Wonton and Wonton soup. Both are filled with pork and shrimp.
Available at many Chinese-American resturaunts, these wontons became popular due to their traditional preparation.

In American Chinese cuisine
American Chinese cuisine
American Chinese cuisine refers to the style of food served by many Chinese restaurants in the United States. This type of cooking typically caters to Western tastes, and differs significantly from the original Chinese cuisine.-History:...
(and in Canada
Canadian Chinese cuisine
Canadian Chinese cuisine is a popular style of cooking exclusive to take-out and dine-in eateries found across Canada. It was the first form of commercially available Chinese food available in Canada. This cooking style was invented by early Cantonese immigrants who adapted traditional Chinese...
as well), wontons are served in two ways: in wonton soup (wontons in a clear broth), and as an appetizer called fried wontons. Fried wontons are often served without filling and eaten with duck sauce
Duck sauce
Duck sauce is a condiment with a sweet and sour flavor and a translucent orange appearance similar to a thin jelly. Offered at Chinese-American restaurants, it is used as a dip for deep-fried dishes such as duck, chicken, fish, spring rolls, egg rolls, or with rice or noodles. It is often provided...
or Chinese mustard. Some fried wontons are filled with a cream cheese and crab filling and called crab rangoon
Crab rangoon
Crab rangoon are deep-fried dumplings served in American Chinese, and more recently, Thai restaurants, stuffed with a combination of cream cheese, lightly flaked crab meat , with scallions and/or garlic...
. Compared to the Far East
Far East
The Far East is an English term mostly describing East Asia and Southeast Asia, with South Asia sometimes also included for economic and cultural reasons.The term came into use in European geopolitical discourse in the 19th century,...
versions, fried wontons are eaten dry.

In Mandarin, the name of the food is written as 餛飩 (pinyin
Pinyin
Pinyin is the official system to transcribe Chinese characters into the Roman alphabet in China, Malaysia, Singapore and Taiwan. It is also often used to teach Mandarin Chinese and spell Chinese names in foreign publications and used as an input method to enter Chinese characters into...
: húntun; roughly meaning "irregularly shaped dumpling"). However, the English name derives from the Cantonese wan4tan1.

In Cantonese, 雲吞 or 云吞 (pinyin
Pinyin
Pinyin is the official system to transcribe Chinese characters into the Roman alphabet in China, Malaysia, Singapore and Taiwan. It is also often used to teach Mandarin Chinese and spell Chinese names in foreign publications and used as an input method to enter Chinese characters into...
: yúntūn; Cantonese
Cantonese
Cantonese is a dialect spoken primarily in south China.Cantonese may also refer to:* Yue Chinese, the Chinese language that includes Cantonese* Cantonese cuisine, the cuisine of Guangdong province...
: wɐ̭ntʰɐ́n), is a popular variant written form that literally means "swallowing clouds".