A drive-through, or drive-thru, is a type of service provided by a business that allows customers to purchase products without leaving their cars. The format was first pioneered in the United States
United States
The United States of America is a federal constitutional republic comprising fifty states and a federal district...
in the 1930s but has since spread to other countries. The first recorded use of a bank using a drive up window teller was the Grand National Bank of St. Louis, Missouri
St. Louis, Missouri
St. Louis is an independent city on the eastern border of Missouri, United States. With a population of 319,294, it was the 58th-largest U.S. city at the 2010 U.S. Census. The Greater St...
in 1930. The drive up teller only allowed deposits at that time period.

Orders are generally placed using a microphone
Microphone
A microphone is an acoustic-to-electric transducer or sensor that converts sound into an electrical signal. In 1877, Emile Berliner invented the first microphone used as a telephone voice transmitter...
and picked up in person at the window. A drive-through is different from a drive-in
Drive-in
A drive-in is a facility such as a bank, restaurant, or movie theater where one can literally drive in with an automobile for service. It is usually distinguished from a drive-through. At a drive-in restaurant, for example, customers park their vehicles and are usually served by staff who walk out...
in several ways— The cars create a line and move in one direction in drive-throughs, and do not park, whereas drive-ins allow cars to park next to each other, the food is generally brought to the window by a server, called a carhop
Carhop
A carhop is a waiter or waitress who brings food to people in their cars at drive-in restaurants. Usually car hops work on foot but sometimes use rollerskates. The popularity of movies such as American Graffiti and shows like Happy Days created a misconception of carhops as exclusively roller...
, and the customer can remain in the parked car to eat.

Drive-throughs have generally replaced drive-ins in popular culture, and are now found in the vast majority of modern American fast-food chains
Chain store
Chain stores are retail outlets that share a brand and central management, and usually have standardized business methods and practices. These characteristics also apply to chain restaurants and some service-oriented chain businesses. In retail, dining and many service categories, chain businesses...
. Sometimes, a store with a drive-through is referred to as a "drive-through," or the term is attached to the service, such as, "drive-through restaurant," or "drive-through bank."

Drive-thrus typically have signs over the drive-thru lanes to show customers which lanes are open for business. The types of signage used is usually illuminated so the "open-type" message can be changed to a closed-type message when the lane is not available. 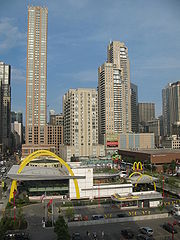 A drive-through restaurant generally consists of:

Drive-through designs are different from restaurant to restaurant; however, most drive-throughs can accommodate four to six passenger cars or trucks at once (called the queue
Queue area
Queue areas are places in which people queue for goods or services. Examples include checking out groceries or other goods that have been collected in a self service shop, in a shop without self service, at an ATM, at a ticket desk, a city bus, or in a taxi stand.Queueing is a phenomenon in a...
).

In-n-Out Burger
In-N-Out Burger
In-N-Out Burger is a regional chain of fast food restaurants with locations in the western United States. Founded in 1948 by Harry Snyder and his wife Esther, establishing the first In-N-Out burger in Baldwin Park and headquartered in Irvine, California, In-N-Out Burger has since expanded outside...
claims to have built the first drive-through restaurant in 1948. Harry and Esther Snyder, the chain's founders, built their first restaurant in Baldwin Park, California, with a two-way speaker to enable patrons to order directly from their cars without the intermediation of a carhop. Maid-Rite
Maid-Rite
Maid-Rite is an American casual dining franchise restaurant chain. Before it became a restaurant chain, it was a single restaurant, opened in 1926 by Fred Angell. By the end of the 1920s, there were four franchises granted; these four restaurants are still in operation.Maid-Rite Corporation's CEO...
also claims to have had the first drive through window. Other sources cite Jack in the Box as the first major restaurant specifically designed as a drive-through and featuring a two-way intercom. The first Jack in the Box opened in 1951 in San Diego. The drive-through concept was so unfamiliar to people at the time that the Jack in the Box "clown," where the speaker was housed, held a sign saying, "Pull forward, Jack will speak to you."

Sierra Vista, Arizona, was the first city to have a McDonald's
McDonald's
McDonald's Corporation is the world's largest chain of hamburger fast food restaurants, serving around 64 million customers daily in 119 countries. Headquartered in the United States, the company began in 1940 as a barbecue restaurant operated by the eponymous Richard and Maurice McDonald; in 1948...
drive-through. The first McDonald’s drive-thru was created in 1975 near Fort Huachuca
Fort Huachuca
Fort Huachuca is a United States Army installation under the command of the United States Army Installation Management Command. It is located in Cochise County, in southeast Arizona, about north of the border with Mexico. Beginning in 1913, for 20 years the fort was the base for the "Buffalo...
, a military base located adjacent to the city—to serve soldiers who weren’t permitted to get out of their cars while wearing fatigues.(http://www.mcdonalds.com/us/en/our_story/our_history.html) The original McDonald's was closed down and demolished in May 1999 and a new McDonald's replaced it.

The first drive-through restaurant (a McDonald's
McDonald's
McDonald's Corporation is the world's largest chain of hamburger fast food restaurants, serving around 64 million customers daily in 119 countries. Headquartered in the United States, the company began in 1940 as a barbecue restaurant operated by the eponymous Richard and Maurice McDonald; in 1948...
drive-through) in Europe
Europe
Europe is, by convention, one of the world's seven continents. Comprising the westernmost peninsula of Eurasia, Europe is generally 'divided' from Asia to its east by the watershed divides of the Ural and Caucasus Mountains, the Ural River, the Caspian and Black Seas, and the waterways connecting...
opened at the Nutgrove Shopping Centre
Nutgrove Shopping Centre
Nutgrove Shopping Centre is a shopping centre located in Rathfarnham, South Dublin, Ireland. Anchor tenants include Tesco, McDonald's, Dunnes Stores, Penneys and Argos. Since opening in October 1984 Nutgrove Shopping centre has been serving the shoppers of South County Dublin...
in Dublin, Ireland
Ireland
Ireland is an island to the northwest of continental Europe. It is the third-largest island in Europe and the twentieth-largest island on Earth...
in 1985.

In the Netherlands, Germany France and other northern European countries, McDonald's drive-thru service is called McDrive.

In 1928, City Center Bank, which became UMB Financial Corporation
UMB Financial Corporation
UMB Financial Corporation is an American financial services company based in Kansas City, Missouri with operations in seven, mostly Midwestern, states. The company owns commercial banks, a brokerage company, a community development corporation, a consulting company, a mutual fund servicing...
, president R. Crosby Kemper
R. Crosby Kemper
Rufus Crosby Kemper Sr. transformed City Center Bank into UMB Financial Corporation in Kansas City, Missouri, during his tenure from 1919 to 1967....
opened what is considered the first drive-up window. Shortly after the Grand National Bank in St Louis opened up a drive through, including a slot to the side for night time deposits. On the page 8 of the December 15, 1940, issue of the Syracuse Herald Journal, Merchant's Bank of Syracuse, New York
Syracuse, New York
Syracuse is a city in and the county seat of Onondaga County, New York, United States, the largest U.S. city with the name "Syracuse", and the fifth most populous city in the state. At the 2010 census, the city population was 145,170, and its metropolitan area had a population of 742,603...
, ran an advertisement for the newly opened "Drive-In Teller Service" located on the side of their bank building on South Warren Street in downtown Syracuse. Westminster Bank
Westminster Bank
Westminster Bank was a British retail bank which operated in England and Wales from 1834 until its merger into the National Westminster Bank in 1970; it remains a registered company but is dormant...
, impressed by the concept, opened the UK's first drive-through bank in Liverpool in 1959, soon followed by Ulster Bank
Ulster Bank
Ulster Bank is a large commercial bank, one of the Big Four in both Northern Ireland and the Republic of Ireland. The Ulster Bank Group is subdivided into two separate legal entities, Ulster Bank Limited and Ulster Bank Ireland Limited...
opening Ireland's first in 1961 at Finaghy.

In recent years, there has been a decline in drive-through banking due to increased traffic congestion and the increased availability of automated teller machines and telephone and Internet banking. However, many bank buildings now feature drive-through ATMs.

In Mexico some areas of medium-high class have ATM Drive Through Facilities like in Huixquilucan,Estado de Mexico

Pedestrian
Pedestrian
A pedestrian is a person traveling on foot, whether walking or running. In some communities, those traveling using roller skates or skateboards are also considered to be pedestrians. In modern times, the term mostly refers to someone walking on a road or footpath, but this was not the case...
s sometimes attempt to walk through the drive-through to order food after the seated section of a fast-food restaurant has closed. Many establishments refuse drive-through service to pedestrians for safety, insurance, and liability reasons, such as Jack in the Box
Jack in the Box
Jack in the Box is an American fast-food restaurant founded by Robert O. Peterson in 1951 in San Diego, California, where it is still headquartered today. In total, the chain has 2,200 locations, primarily serving the West Coast of the United States...
. Cyclists are usually refused service with the same justification given.
However, in the summer of 2009, Burgerville gave use of the drive-thru window to bicyclists. Similar issues can arise in rural areas for people on horseback or in a horse-drawn carriage.