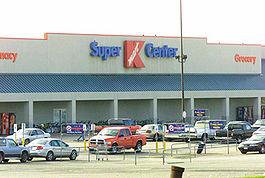 Chain stores are retail
Retailing
Retail consists of the sale of physical goods or merchandise from a fixed location, such as a department store, boutique or kiosk, or by mail, in small or individual lots for direct consumption by the purchaser. Retailing may include subordinated services, such as delivery. Purchasers may be...
outlets that share a brand
Brand
The American Marketing Association defines a brand as a "Name, term, design, symbol, or any other feature that identifies one seller's good or service as distinct from those of other sellers."...
and central management, and usually have standardized business methods and practices. These characteristics also apply to chain restaurants and some service-oriented chain businesses. In retail, dining and many service categories, chain businesses have come to dominate the market in many parts of the world. A franchise
Franchising
Franchising is the practice of using another firm's successful business model. The word 'franchise' is of anglo-French derivation - from franc- meaning free, and is used both as a noun and as a verb....
retail establishment is one form of chain store.

In the U.S., chain stores began with the founding of The Great Atlantic & Pacific Tea Company
The Great Atlantic & Pacific Tea Company
The Great Atlantic & Pacific Tea Company, better known as A&P, is a supermarket and liquor store chain in the United States. Its supermarkets, which are under six different banners, are found in Connecticut, Delaware, Maryland, New Jersey, New York, and Pennsylvania. A&P's liquor stores, known as...
(A&P) in 1859. By the early 1920s, the U.S. boasted three national chains: A&P, Woolworth's
F. W. Woolworth Company
The F. W. Woolworth Company was a retail company that was one of the original American five-and-dime stores. The first successful Woolworth store was opened on July 18, 1879 by Frank Winfield Woolworth in Lancaster, Pennsylvania, as "Woolworth's Great Five Cent Store"...
, and United Cigar Stores
United Cigar Stores
United Cigar Stores was the largest chain of cigar stores in the United States. Though initially specializing in cigars, it eventually sold many other items, such as Mickey Mouse watches and shoe trees. The chain was founded in 1901. The chain represented the interests of the Consolidated Tobacco...
. By the 1930s, chain stores had come of age, and stopped increasing their total market share. Court decisions against the chains' price-cutting appeared as early as 1906, and laws against chain stores began in the 1920s, along with legal countermeasures by chain-store groups.

A restaurant chain is a set of related restaurant
Restaurant
A restaurant is an establishment which prepares and serves food and drink to customers in return for money. Meals are generally served and eaten on premises, but many restaurants also offer take-out and food delivery services...
s with the same name in many different locations that are either under shared corporate ownership (e.g., In-N-Out Burger
In-N-Out Burger
In-N-Out Burger is a regional chain of fast food restaurants with locations in the western United States. Founded in 1948 by Harry Snyder and his wife Esther, establishing the first In-N-Out burger in Baldwin Park and headquartered in Irvine, California, In-N-Out Burger has since expanded outside...
s in the U.S.) or franchising
Franchising
Franchising is the practice of using another firm's successful business model. The word 'franchise' is of anglo-French derivation - from franc- meaning free, and is used both as a noun and as a verb....
agreements. Typically, the restaurants within a chain are built to a standard format and offer a standard menu. Fast food
Fast food
Fast food is the term given to food that can be prepared and served very quickly. While any meal with low preparation time can be considered to be fast food, typically the term refers to food sold in a restaurant or store with preheated or precooked ingredients, and served to the customer in a...
restaurants are the most common, but sit-down restaurant chains (such as TimberLodge Steakhouse
Timberlodge
Timber Lodge Steakhouse is an American steakhouse chain primarily based in the Midwestern, United States.-History:Timber Lodge Steakhouse Inc. was originally founded under the name Minnesota Steakhouse in September of 1991, in Burnsville, Minnesota. The founder of Minnesota Steakhouse, Doron...
, T.G.I. Friday's
T.G.I. Friday's
T.G.I. Friday's is an American restaurant chain focusing on casual dining. The company is a unit of the Carlson Companies. Its name is taken from the expression TGIF...
, Ruby Tuesday
Ruby Tuesday (restaurant)
Ruby Tuesday is an American casual dining restaurant chain named after the Rolling Stones' song of the same name.- History :The first restaurant was founded in 1972 by five University of Tennessee students, and is now headquartered in Maryville, Tennessee. The first location was adjacent to UT's...
, and Olive Garden
Olive Garden
Olive Garden is an American restaurant chain specializing in Italian-American cuisine. It is a subsidiary of Darden Restaurants, Inc., which is headquartered in an unincorporated area in Orange County, Florida, near Orlando. Olive Garden operates more than 730 locations globally.- History :The...
) also exist. Restaurant chains are often found near highways, shopping mall
Shopping mall
A shopping mall, shopping centre, shopping arcade, shopping precinct or simply mall is one or more buildings forming a complex of shops representing merchandisers, with interconnecting walkways enabling visitors to easily walk from unit to unit, along with a parking area — a modern, indoor version...
s and tourist areas.

Some small towns in the United States whose residents wish their distinctive character such as Provincetown, Massachusetts
Provincetown, Massachusetts
Provincetown is a New England town located at the extreme tip of Cape Cod in Barnstable County, Massachusetts, United States. The population was 3,431 at the 2000 census, with an estimated 2007 population of 3,174...
and other Cape Cod
Cape Cod
Cape Cod, often referred to locally as simply the Cape, is a cape in the easternmost portion of the state of Massachusetts, in the Northeastern United States...
villages; McCall, Idaho
McCall, Idaho
McCall is a resort town on the western edge of Valley County, Idaho, United States. Named after its founder, Tom McCall, it is situated on the southern shore of Payette Lake, near the center of the Payette National Forest...
; Port Townsend, Washington
Port Townsend, Washington
Port Townsend is a city in Jefferson County, Washington, United States, approximately north-northwest of Seattle . The population was 9,113 at the 2010 census an increase of 9.3% over the 2000 census. It is the county seat and only incorporated city of Jefferson County...
; Ogunquit, Maine
Ogunquit, Maine
Ogunquit is a town in York County, Maine, United States. As of the 2000 census its population was 1,226. The popularity of the town as a summer resort is epitomized by its motto, "Beautiful Place by the Sea."...
; and Carmel-by-the-Sea, California
Carmel-by-the-Sea, California
Carmel-by-the-Sea, often called simply Carmel, is a small city in Monterey County, California, United States, founded in 1902 and incorporated in 1916. Situated on the Monterey Peninsula, the town is known for its natural scenery and rich artistic history...
closely regulate, even exclude, chain stores. They don't exclude the chain itself, only the standardized formula the chain uses, for example, there could be a restaurant owned by McDonald's
McDonald's
McDonald's Corporation is the world's largest chain of hamburger fast food restaurants, serving around 64 million customers daily in 119 countries. Headquartered in the United States, the company began in 1940 as a barbecue restaurant operated by the eponymous Richard and Maurice McDonald; in 1948...
which sells hamburgers, but not the formula franchise operation with the golden arches and standardized menu, uniforms, and procedures. The reason why they regulate chain stores is to protect independent businesses from competition.