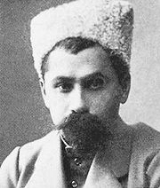 Encyclopedia
General Drastamat Kanayan ( (Drastamat Kanahyean), known as General Dro, Դրօ, May 31, 1884 March 8, 1956), was a politician, revolutionary, military commander of Hitler’s Armenian Legion of the Wehrmacht, the armed forces of Nazi Germany
Nazi Germany
Nazi Germany , also known as the Third Reich , but officially called German Reich from 1933 to 1943 and Greater German Reich from 26 June 1943 onward, is the name commonly used to refer to the state of Germany from 1933 to 1945, when it was a totalitarian dictatorship ruled by...
, and part of Armenian national liberation movement as a member of the A.R.F. Dashnaktsuyun
Armenian Revolutionary Federation
The Armenian Revolutionary Federation is an Armenian political party founded in Tiflis in 1890 by Christapor Mikaelian, Stepan Zorian, and Simon Zavarian...
.

Drastamat Kanayan was born in, Surmalu (present-day Iğdır
Igdir
Iğdır is the capital of Iğdır Province in the Eastern Anatolia Region, Turkey, and borders Armenia, Azerbaijan and Iran. The border with Armenia is formed by the Aras River...
), Russian Empire
Russian Empire
The Russian Empire was a state that existed from 1721 until the Russian Revolution of 1917. It was the successor to the Tsardom of Russia and the predecessor of the Soviet Union...
(present-day Turkey
Turkey
Turkey , known officially as the Republic of Turkey , is a Eurasian country located in Western Asia and in East Thrace in Southeastern Europe...
) in 1884. He was the son of Martiros Kanayan, the head of the Kanayan, or "Gago", family clan in Igdir and Horom Kanayan, Drastamat's mother. At an early age, Martiros Kanayan enrolled his son to the parish school of Igdir. Drastamat would skip school to hang out near the military barracks of Igdir because of his interest in the military exercises held there. Noticing that he had no interest in books and learning, Martiros Kanayan pulled him out of the village school and enrolled him to the Yerevan
Yerevan
Yerevan is the capital and largest city of Armenia and one of the world's oldest continuously-inhabited cities. Situated along the Hrazdan River, Yerevan is the administrative, cultural, and industrial center of the country...
Gymnasium school.

On June 12, 1903, the tsarist authorities passed an edict to bring all Armenian Church property under imperial control. This was faced by strong Armenian opposition because it perceived the tsarist edict as a threat to the Armenian national existence. As a result, the Armenian leadership decided to actively defend Armenian churches by dispatching militiamen who acted as guards and holding mass demonstrations. This prompted Drastamat Kanayan to join the ranks of the Dashnaktsutiun
Armenian Revolutionary Federation
The Armenian Revolutionary Federation is an Armenian political party founded in Tiflis in 1890 by Christapor Mikaelian, Stepan Zorian, and Simon Zavarian...
in order to defend the churches from being confiscated through public demonstrations and guard duty.

In November 1914, he had the second battalion of the Armenian volunteers. At the Bergmann Offensive
Bergmann Offensive
The Bergmann Offensive was the first engagement of the Caucasus Campaign. General Georgy Berhmann, who was the commander of the I Caucasian Army Corps took the initiative against the Ottoman Empire....
, the second battalion of the Armenian volunteers engaged in battle for the first time, near Bayazid. In the course of a bloody combat which lasted twenty-four hours, Dro, commander of the battalion, was seriously wounded. From that day to March of the following year, he remained in critical condition, but his battilion led into eleven battles in the neighborhood of Alashkert, Toutakh, and Malashkert, until Dro recovered and returned to resume the command. Kanayan had already become a popular military leader after the victories over the Ottoman Empire
Ottoman Empire
The Ottoman EmpireIt was usually referred to as the "Ottoman Empire", the "Turkish Empire", the "Ottoman Caliphate" or more commonly "Turkey" by its contemporaries...
at the Caucasus Campaign
Caucasus Campaign
The Caucasus Campaign comprised armed conflicts between the Ottoman Empire and the Russian Empire, later including Azerbaijan, Armenia, Central Caspian Dictatorship and the UK as part of the Middle Eastern theatre or alternatively named as part of the Caucasus Campaign during World War I...
. 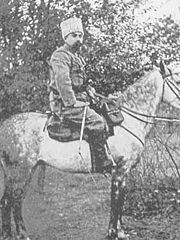 During the Armenian Genocide
Armenian Genocide
The Armenian Genocide—also known as the Armenian Holocaust, the Armenian Massacres and, by Armenians, as the Great Crime—refers to the deliberate and systematic destruction of the Armenian population of the Ottoman Empire during and just after World War I...
, Kanayan fought off Turkish aggression against Armenian civilians. "In history it happened to the Armenians in Turkey and Eastern Anatolia 2.5 million Armenians were killed by the Turks in the worst possible way imaginable. It is sickening to think that the human race is capable of such actions, but there is no denying the fact that the genocide of 1 million Armenians happened. The Armenian General Dro, was the hero of this Turkish genocide of Armenians, 1914-1920." - Arto Derounian (as 'John Roy Carlson'), Armenian Affairs magazine Winter issue, 1949–50, page 19, footnote. (Derounian's first name was "Avedis," and "Arthur" is the name he usually used; the author's "Under Cover" was a best seller in 1944.)

In 1920, after the incorporation of the Republic of Armenia into the Soviet Union
Soviet Union
The Soviet Union , officially the Union of Soviet Socialist Republics , was a constitutionally socialist state that existed in Eurasia between 1922 and 1991....
, Drastamat Kanayan immigrated to Iran
Iran
Iran , officially the Islamic Republic of Iran , is a country in Southern and Western Asia. The name "Iran" has been in use natively since the Sassanian era and came into use internationally in 1935, before which the country was known to the Western world as Persia...
and later to Germany.

In 1920, Drastamat Kanayan advanced to the vicinity of Shushi. On the night from March 21-March 22, 1920 when the Azeris were celebrating Novruz Bayram, the Armenians of Karabakh began to revolt and organized a surprise attack. During these clashes thousands of people from both the Armenian and Azeri sides were killed, with more than 7,000 houses burned and Shusha virtually cleansed of its Armenian population. On April, 1920, the bolshevik leadership of the Red Army informed from the Drastamat Kanayan to leave Karabagh. Karabagh-Zangezur was on the break of armed confrontation between Armenia and Azerbaijan, and Drastamat Kanayan knew that if he did not compy with this demand the Red Army and the armed forces of Azerbaijan would have to act jointly. Dro had to withdraw because of the Sovietization of Azerbaijan and the assurances given by Sergo Ordzhonikidze’s messengers regarding a just solution to the Karabagh conflict. In this situation on May 26 the tenth congress of Armenian National Council of Karabagh
Armenian National Council of Karabagh
The Karabakh Council the government of Nagorno-Karabakh between 1918-1920. It was elected by the Karabakh Congress, the representative body of the people of Nagorno-Karabakh, on July 27, 1918...
, which took place in Taghavard village, proclaimed the change of position. The "Armenian National Council of Karabagh" was replaced with "Revolutionary Committee of Nagorno Karabagh". It was headed by S. Hambartsumian. On the same day Drastamat Kanayan along with his units was forced to leave Karabagh.

The short-lived Armenian Republic established in 1918 in the Southern Caucasus by the Armenian Revolutionary Federation (The Dashnaks) was conquered by the Russian Bolshevik
Bolshevik
The Bolsheviks, originally also Bolshevists , derived from bol'shinstvo, "majority") were a faction of the Marxist Russian Social Democratic Labour Party which split apart from the Menshevik faction at the Second Party Congress in 1903....
s in 1920, and ceased to exist. During World War II, the Dashnaks saw a good opportunity in the collaboration with the Nazis to regain those territories. The expected prize was an Armenian state in a new world created by Nazi Germany
Nazi Germany
Nazi Germany , also known as the Third Reich , but officially called German Reich from 1933 to 1943 and Greater German Reich from 26 June 1943 onward, is the name commonly used to refer to the state of Germany from 1933 to 1945, when it was a totalitarian dictatorship ruled by...
. Aid was given in propaganda
Propaganda
Propaganda is a form of communication that is aimed at influencing the attitude of a community toward some cause or position so as to benefit oneself or one's group....
and intelligence
Intelligence
Intelligence has been defined in different ways, including the abilities for abstract thought, understanding, communication, reasoning, learning, planning, emotional intelligence and problem solving....
in which the Armenian organizations were active. On December 30, 1941 they formed from ethnic Armenians an 18,000-strong battalion
Battalion
A battalion is a military unit of around 300–1,200 soldiers usually consisting of between two and seven companies and typically commanded by either a Lieutenant Colonel or a Colonel...
known as the "812th Armenian Battalion of Wehrmacht" under the command of Drastamat Kanayan known by his nickname “Dro”. The legion was trained by SS officers and participated in the occupation of the Crimea
Crimea
Crimea , or the Autonomous Republic of Crimea , is a sub-national unit, an autonomous republic, of Ukraine. It is located on the northern coast of the Black Sea, occupying a peninsula of the same name...
n Peninsula and the Caucasus
Caucasus
The Caucasus, also Caucas or Caucasia , is a geopolitical region at the border of Europe and Asia, and situated between the Black and the Caspian sea...
.

According to Joris Versteeg, the total number of Armenians serving in the German armed forces during the war was 18,000: 11,000 were placed in field battalions, while 7,000 were placed in logistic and non-combat units. Ailsby puts the number at 11,600.

After World War II, Kanayan emigrated to the United States and continued his political activities with the purpose of advancing the “Armenian Cause”. In 1947, at the Universal Congress of the Dashnak Party, he was forgiven for his collaboration with Nazis, as he could justify it with powerful arguments, and was again elected a member of the Party.

With the end of World War II, Drastamat Kanayan was arrested by American forces, but soon released. Kanayan settled within the large Armenian Diaspora
Armenian diaspora
The Armenian diaspora refers to the Armenian communities outside the Republic of Armenia and self proclaimed de facto independent Nagorno-Karabakh Republic...
of Lebanon. When traveling to the U.S. for medical treatment, he died in Boston
Boston
Boston is the capital of and largest city in Massachusetts, and is one of the oldest cities in the United States. The largest city in New England, Boston is regarded as the unofficial "Capital of New England" for its economic and cultural impact on the entire New England region. The city proper had...
on 8 March 1956.