Encyclopedia
Delta II was an American space launch system, originally designed and built by McDonnell Douglas
McDonnell Douglas
McDonnell Douglas was a major American aerospace manufacturer and defense contractor, producing a number of famous commercial and military aircraft. It formed from a merger of McDonnell Aircraft and Douglas Aircraft in 1967. McDonnell Douglas was based at Lambert-St. Louis International Airport...
. Delta II is part of the Delta rocket
Delta rocket
Delta is a versatile family of expendable launch systems that has provided space launch capability in the United States since 1960. There have been more than 300 Delta rockets launched, with a 95 percent success rate. Two Delta launch systems – Delta II and Delta IV – are in active use...
family and was in service from 1989 until November 1, 2011. Delta II vehicles included the Delta 6000, the Delta 7000, and two 7000 variants ("Light" and "Heavy").

After McDonnell Douglas merged with Boeing
Boeing
The Boeing Company is an American multinational aerospace and defense corporation, founded in 1916 by William E. Boeing in Seattle, Washington. Boeing has expanded over the years, merging with McDonnell Douglas in 1997. Boeing Corporate headquarters has been in Chicago, Illinois since 2001...
in 1997, Delta II rockets were built by Boeing Integrated Defense Systems
Boeing Integrated Defense Systems
Boeing Defense, Space & Security formerly known as Boeing Integrated Defense Systems is a unit of The Boeing Company responsible for defense and aerospace products and services. Boeing Integrated Defense Systems was formed in 2002 by combining the former "Military Aircraft and Missile Systems"...
, until Delta rocket production became the responsibility of United Launch Alliance
United Launch Alliance
United Launch Alliance is a joint venture of Lockheed Martin and Boeing. ULA was formed in December 2006 by combining the teams at these companies which provide spacecraft launch services to the government of the United States. U.S...
(ULA) on December 1, 2006. ULA now markets Delta II to U.S. government customers, and Boeing Launch Services (BLS) markets Delta II to commercial companies.

All United States expendable launch vehicles were planned to be phased out in favour of the Space Shuttle
Space Shuttle
The Space Shuttle was a manned orbital rocket and spacecraft system operated by NASA on 135 missions from 1981 to 2011. The system combined rocket launch, orbital spacecraft, and re-entry spaceplane with modular add-ons...
, but the Challenger disaster
Space Shuttle Challenger disaster
The Space Shuttle Challenger disaster occurred on January 28, 1986, when Space Shuttle Challenger broke apart 73 seconds into its flight, leading to the deaths of its seven crew members. The spacecraft disintegrated over the Atlantic Ocean, off the coast of central Florida at 11:38 am EST...
of 1986 led to Delta development being restarted. The Delta II was specifically designed to accommodate the GPS Block II series of positioning satellites. As of August 2007, Delta IIs have successfully launched 125 projects, including several NASA
NASA
The National Aeronautics and Space Administration is the agency of the United States government that is responsible for the nation's civilian space program and for aeronautics and aerospace research...
missions to Mars
Mars
Mars is the fourth planet from the Sun in the Solar System. The planet is named after the Roman god of war, Mars. It is often described as the "Red Planet", as the iron oxide prevalent on its surface gives it a reddish appearance...
:

Delta II manufacturing, assembly and integration take place at facilities in Decatur, Alabama
Decatur, Alabama
Decatur is a city in Limestone and Morgan Counties in the U.S. state of Alabama. The city, affectionately known as "The River City", is located in Northern Alabama on the banks of Wheeler Lake, along the Tennessee River. It is the largest city and county seat of Morgan County...
; Harlingen, Texas
Harlingen, Texas
Harlingen is a city in Cameron County in the heart of the Rio Grande Valley of south Texas, United States, about from the coast of the Gulf of Mexico. The city covers more than , and is the second largest city in Cameron County and the sixth largest in the Rio Grande Valley...
; San Diego, California
San Diego, California
San Diego is the eighth-largest city in the United States and second-largest city in California. The city is located on the coast of the Pacific Ocean in Southern California, immediately adjacent to the Mexican border. The birthplace of California, San Diego is known for its mild year-round...
; and Denver, Colorado
Denver, Colorado
The City and County of Denver is the capital and the most populous city of the U.S. state of Colorado. Denver is a consolidated city-county, located in the South Platte River Valley on the western edge of the High Plains just east of the Front Range of the Rocky Mountains...
.

The Delta II family uses a four-digit system to generate its technical names:

For example, a Delta 7925 has the later first stage, nine GEM boosters, and a PAM third stage. A Delta 7320 is a two-stage vehicle with three boosters.


Three payload fairings are available. The original aluminum fairing, seen above, is 9.5 feet in diameter. A 10-foot fairing is made of composite, and can be distinguished by its tapering front and rear. A lengthened 10-foot fairing is used for the largest payloads.

The Delta II system has been used for 151 launches. On September 18, 2007, Delta II completed its 75th consecutive successful launch. This is a record for modern launch vehicles. At the time of its retirement on 1 November 2011, it was the most reliable launch vehicle in service, behind the retired Tsyklon 2. Eight launches took place in 2007.

However, the Delta II system does not have a perfect success record. One mission, the launch of Koreasat-1 in 1995, was a partial failure in which the satellite payload was able to compensate when the launch system placed the vehicle in an incorrect orbit.

Another failure, this time complete, occurred on January 17, 1997, when a Delta II 7925 carrying the first GPS
Global Positioning System
The Global Positioning System is a space-based global navigation satellite system that provides location and time information in all weather, anywhere on or near the Earth, where there is an unobstructed line of sight to four or more GPS satellites...
Block IIR satellite, GPS IIR-1
GPS IIR-1
GPS IIR-1 or GPS SVN-42 was the first Block IIR GPS satellite to be launched. It was to have been operated as part of the United States Air Force Global Positioning System. It was launched on 17 January 1997, however it was destroyed thirteen seconds into its flight due to a malfunction of the...
, exploded only 13 seconds after liftoff, raining flaming debris all over Launch Complex 17 at Cape Canaveral Air Force Station. No one was injured, and the launchpad itself was not seriously damaged, though several cars were destroyed and a few buildings were damaged. It was later determined that a "17-foot crack" in the rocket booster had caused the failure.

Furthermore, between May 1997 and November 1998, Delta II vehicles placed 55 Iridium
Iridium (satellite)
Iridium Communications Inc. is a company, based in McLean, VA, United States which operates the Iridium satellite constellation, a system of 66 active satellites used for worldwide voice and data communication from hand-held satellite phones and other transceiver units...
satellites into orbit. 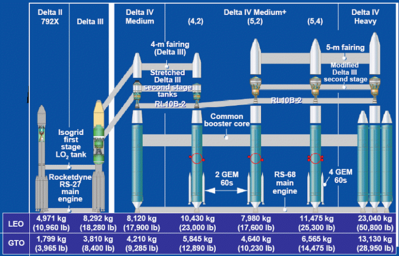 As of October 28, 2011, no further Delta II missions are scheduled. ULA has indicated it has "around half a dozen" unsold Delta II rockets on hand. A spokesperson indicated that ULA will change some aspects of the Delta II system once the current Medium Launch Vehicle 3 contract with the Air Force ends and requirements imposed by the contract are lifted. The Air Force contract required that Delta II be kept ready to launch within 40 days of call up, which led ULA to maintain two launch pads at Cape Canaveral. ULA indicated it would not continue to operate two launch pads.