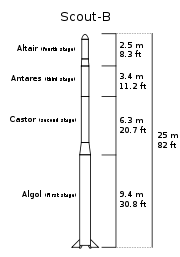 The Castor family of solid-fuel rocket  stages
Multistage rocket
A multistage rocket is a rocket that usestwo or more stages, each of which contains its own engines and propellant. A tandem or serial stage is mounted on top of another stage; a parallel stage is attached alongside another stage. The result is effectively two or more rockets stacked on top of or...
and boosters
Solid rocket booster
Solid rocket boosters or Solid Rocket Motors, SRM, are used to provide thrust in spacecraft launches from the launchpad up to burnout of the SRBs. Many launch vehicles include SRBs, including the Ariane 5, Atlas V , and the NASA Space Shuttle...
were built by Thiokol
Thiokol
Thiokol is a U.S. corporation concerned initially with rubber and related chemicals, and later with rocket and missile propulsion systems...
(now ATK
Alliant Techsystems
Alliant Techsystems Inc., most commonly known by its ticker symbol, ', is one of the largest aerospace and defense companies in the United States with more than 18,000 employees in 22 states, Puerto Rico and internationally, and 2010 revenues in excess of an estimated...
) and used on a variety of launch vehicle
Launch vehicle
In spaceflight, a launch vehicle or carrier rocket is a rocket used to carry a payload from the Earth's surface into outer space. A launch system includes the launch vehicle, the launch pad and other infrastructure....
s. They were initially developed as the second stage motor of the Scout rocket. The design was based the MGM-29 Sergeant
MGM-29 Sergeant
The MGM-29 Sergeant was an American short-range, solid fuel, surface-to-surface missile developed at the Jet Propulsion Laboratory. Activated by the US Army in 1962 to replace the MGM-5 Corporal it was deployed overseas by 1963, carrying the W52 nuclear warhead or alternatively one of high explosives...
, a surface-to-surface missile
Surface-to-surface missile
A surface-to-surface missile is a guided projectile launched from a hand-held, vehicle mounted, trailer mounted or fixed installation or from a ship. They are often powered by a rocket motor or sometimes fired by an explosive charge, since the launching platform is typically stationary or moving...
developed for the United States Army
United States Army
The United States Army is the main branch of the United States Armed Forces responsible for land-based military operations. It is the largest and oldest established branch of the U.S. military, and is one of seven U.S. uniformed services...
at the Jet Propulsion Laboratory
Jet Propulsion Laboratory
Jet Propulsion Laboratory is a federally funded research and development center and NASA field center located in the San Gabriel Valley area of Los Angeles County, California, United States. The facility is headquartered in the city of Pasadena on the border of La Cañada Flintridge and Pasadena...
.

The Castor 1 was first used for a successful suborbital launch of a Scout X-1
Scout (rocket)
The Scout family of rockets were launch vehicles designed to place small satellites into orbit around the Earth. The Scout multistage rocket was the first orbital launch vehicle to be entirely composed of solid fuel stages....
rocket on September 2, 1960.
It was 19.42 feet (5.9 m) long, 2.6 foot (0.79248 m) in diameter, and had a burn time of 27 seconds. Castor 1 stages were also used as strap-on boosters for launch vehicles using Thor
Thor (launch vehicle)
Thor was an American space launch vehicle derived from the PGM-17 Thor intermediate-range ballistic missile. The Thor rocket was the first in a large family of space launch vehicles that came to be known as Delta...
first stages, including the Delta-D. (A Delta-D was used in 1964 to launch Syncom-3
Syncom
Syncom started as a 1961 NASA program for active geosynchronous communication satellites, all of which were developed and manufactured by Hughes Space and Communications...
, the first satellite placed in a geostationary orbit
Geostationary orbit
A geostationary orbit is a geosynchronous orbit directly above the Earth's equator , with a period equal to the Earth's rotational period and an orbital eccentricity of approximately zero. An object in a geostationary orbit appears motionless, at a fixed position in the sky, to ground observers...
.) Castor 1 stages were used in 141 launch attempts of Scout and Delta rockets, only 2 of which were failures. They were also used on some thrust-assisted Thor-Agena
Thor-Agena
Thor-Agena was a series of orbital launch vehicles. The rockets used Thor first stages and Agena second stages. They are thus cousins of the more famous Thor-Deltas, which founded the Delta rocket family. The first attempted launch of a Thor-Agena was in January 1959...
launchers. The last launch using a Castor 1 was in 1971.

The Castor 4, along with its A and B variants, were expanded to 1.02 m in diameter. They were used as strap-ons on some Delta, Delta II
Delta II
Delta II was an American space launch system, originally designed and built by McDonnell Douglas. Delta II is part of the Delta rocket family and was in service from 1989 until November 1, 2011...
, Atlas IIAS
Atlas II
Atlas II was a member of the Atlas family of launch vehicles, which evolved from the successful Atlas missile program of the 1950s. Atlas II was the last Atlas to use a three engine, "stage-and-a-half" design: two of its three engines were jettisoned during ascent, but its fuel tanks and other...
, and Athena launch vehicles. They were also planned to serve as the first stage of the Spanish Capricornio booster, however, no such flights occurred before the project was cancelled.
Castor 4B is used in the European Maxus
Maxus (rocket)
Maxus is a sounding rocket that are used in the MAXUS microgravity rocket programme, a joint venture between Swedish Space Corporation and EADS Astrium Space Transportation used by ESA...
Programme, with launches from Esrange
Esrange
Esrange Space Center is a rocket range and research centre located outside the town of Kiruna in northern Sweden. It is a base for scientific research with high altitude balloons, investigation of the aurora borealis, sounding rocket launches, and satellite tracking, among other things...
in Sweden.
The H-IIA
H-IIA
H-IIA is an active expendable launch system operated by Mitsubishi Heavy Industries for the Japan Aerospace Exploration Agency . The liquid-fueled H-IIA rockets have been used to launch satellites into geostationary orbit, to launch a lunar orbiting spacecraft, and to launch an interplanetary...
rockets flown by JAXA use either two or four strap-on boosters developed and produced by Alliant Techsystems
Alliant Techsystems
Alliant Techsystems Inc., most commonly known by its ticker symbol, ', is one of the largest aerospace and defense companies in the United States with more than 18,000 employees in 22 states, Puerto Rico and internationally, and 2010 revenues in excess of an estimated...
. These boosters use motors which are modified versions of the Castor IVA-XL motor design. These motors are 38 feet long and approximately 48 inches in diameter.

An upper stage based on the Castor 120 is under development for use on the Taurus II
Taurus II
Taurus II is an expendable launch system being developed by Orbital Sciences Corporation. It is a two stage vehicle designed to launch payloads weighing up to into low-Earth orbit...
launch vehicle.