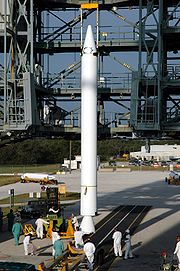 A Graphite-Epoxy Motor is a high-performance, solid rocket
Solid rocket
A solid rocket or a solid-fuel rocket is a rocket engine that uses solid propellants . The earliest rockets were solid-fuel rockets powered by gunpowder; they were used by the Chinese in warfare as early as the 13th century and later by the Mongols, Arabs, and Indians.All rockets used some form of...
motor, used for supplemental thrust on several launch vehicle
Launch vehicle
In spaceflight, a launch vehicle or carrier rocket is a rocket used to carry a payload from the Earth's surface into outer space. A launch system includes the launch vehicle, the launch pad and other infrastructure....
s, including the Boeing Delta II
Delta II
Delta II was an American space launch system, originally designed and built by McDonnell Douglas. Delta II is part of the Delta rocket family and was in service from 1989 until November 1, 2011...
and Delta IV. They are designed to allow launch vehicles to deliver larger payloads to orbit. The name "Graphite-Epoxy Motor" refers specifically to solid motors produced by Alliant Techsystems
Alliant Techsystems
Alliant Techsystems Inc., most commonly known by its ticker symbol, ', is one of the largest aerospace and defense companies in the United States with more than 18,000 employees in 22 states, Puerto Rico and internationally, and 2010 revenues in excess of an estimated...
, although boosters of similar construction are used on other launch vehicles.

A solid rocket motor consists primarily of a casing that is packed with propellant
Propellant
A propellant is a material that produces pressurized gas that:* can be directed through a nozzle, thereby producing thrust ;...
grain (a mixture of a solid fuel, such as a rubber or aluminum, and an oxidizer, such as ammonium perchlorate
Ammonium perchlorate
Ammonium perchlorate is an inorganic compound with the formula NH4ClO4. It is the salt of perchloric acid and ammonia. It is a powerful oxidizer, which is why its main use is in solid propellants...
), and a nozzle at the aft end of the motor. The casing is crucial for the solid motor because it contains the pressure of the burning solid fuel; if the casing was not strong enough, the motor would rupture and explode.

Before the development of Graphite-Epoxy Motors (GEMs), the company's (first Thiokol
Thiokol
Thiokol is a U.S. corporation concerned initially with rubber and related chemicals, and later with rocket and missile propulsion systems...
, now Alliant Techsystems) Castor
Castor (rocket stage)
The Castor family of solid-fuel rocket stages and boosters were built by Thiokol and used on a variety of launch vehicles. They were initially developed as the second stage motor of the Scout rocket...
boosters used steel
Steel
Steel is an alloy that consists mostly of iron and has a carbon content between 0.2% and 2.1% by weight, depending on the grade. Carbon is the most common alloying material for iron, but various other alloying elements are used, such as manganese, chromium, vanadium, and tungsten...
solid motors used to produce extra thrust and boost payload capacity. By using a lighter material, the motor could be made larger to contain more propellant, increasing thrust and payload capacity, without increasing weight excessively. However, simply using thinner steel would not work, as the steel would be insufficiently strong to contain the burning fuel.

Stronger composites eventually enabled the construction of motors that were lighter than the older steel-case motors while still retaining the strength necessary to contain the pressure. The graphite-epoxy composite is lighter than steel, allowing the composite motor to be larger, improving thrust and performance. For example, the GEM-40 motors used on the Delta II are 6 feet longer than the Castor IVA motors they replace, allowing them to produce over 6,000 pounds more thrust and burn seven seconds longer, while still weighing over 200 pounds less. http://space.skyrocket.de/engines_usa.htm

The first flight of a GEM occurred on 26 November 1990. Nine GEMs were used as boosters for a Delta II
Delta II
Delta II was an American space launch system, originally designed and built by McDonnell Douglas. Delta II is part of the Delta rocket family and was in service from 1989 until November 1, 2011...
launch vehicle (Delta 201), launching a NAVSTAR GPS
Global Positioning System
The Global Positioning System is a space-based global navigation satellite system that provides location and time information in all weather, anywhere on or near the Earth, where there is an unobstructed line of sight to four or more GPS satellites...
satellite. http://kevinforsyth.net/delta/log.php


Aerojet
Aerojet
Aerojet is an American rocket and missile propulsion manufacturer based primarily in Rancho Cordova, California with divisions in Redmond, Washington, Orange, Gainesville and Camden, Arkansas. Aerojet is owned by GenCorp. They are the only US propulsion company that provides both solid rocket...
also manufactures strap-on solid rocket boosters for the Atlas V
Atlas V
Atlas V is an active expendable launch system in the Atlas rocket family. Atlas V was formerly operated by Lockheed Martin, and is now operated by the Lockheed Martin-Boeing joint venture United Launch Alliance...
, although they do not use the "GEM" name. They refer to them simply as the Atlas V's Solid Rocket Boosters.

Graphite-Epoxy Motors have proven themselves to be reliable; however they are not infallible. On 17 January 1997, a Delta II (Delta 241) exploded 13 seconds after launch due to a rupture in a graphite-epoxy casing. The failure was a result of the casing having been damaged at some point in the transportation of the vehicle. The investigation team found the damage to the motor case to be caused by the stress induced by the supports which held the GEM during storage and transportation. When the motor ignited, the pressure inside the casing built up until the damaged casing could not hold in the pressure of the burning fuel and exploded, destroying the launch vehicle. http://kevinforsyth.net/delta/log.php
The source of this article is wikipedia, the free encyclopedia.  The text of this article is licensed under the GFDL.