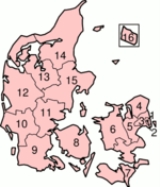 Encyclopedia
Denmark
Denmark
Denmark is a Scandinavian country in Northern Europe. The countries of Denmark and Greenland, as well as the Faroe Islands, constitute the Kingdom of Denmark . It is the southernmost of the Nordic countries, southwest of Sweden and south of Norway, and bordered to the south by Germany. Denmark...
was until December 31, 2006 divided into 15 counties
County
A county is a jurisdiction of local government in certain modern nations. Historically in mainland Europe, the original French term, comté, and its equivalents in other languages denoted a jurisdiction under the sovereignty of a count A county is a jurisdiction of local government in certain...
(Danish
Danish language
Danish is a North Germanic language spoken by around six million people, principally in the country of Denmark. It is also spoken by 50,000 Germans of Danish ethnicity in the northern parts of Schleswig-Holstein, Germany, where it holds the status of minority language...
: amter), and 270 municipalities (kommuner
Township
The word township is used to refer to different kinds of settlements in different countries. Township is generally associated with an urban area. However there are many exceptions to this rule. In Australia, the United States, and Canada, they may be settlements too small to be considered urban...
). On January 1, 2007, the counties were replaced by five Regions
Regions of Denmark
The Regions of Denmark were created as part of the 2007 Danish Municipal Reform. The five regions replace the former sixteen counties . At the same time, the number of municipalities was cut from 270 to 98. The reform was made effective on 1 January 2007.- List of regions :The names of the regions...
and the number of municipalities slashed to 98. 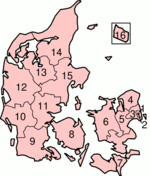 Bornholm was originally divided in five municipalities and a county
Bornholm County
Bornholms Amt is a former county on the island of Bornholm in easternmost Denmark.-Short history:The county was established in 1662, replacing the former Hammershus Len. It was the only county unchanged by the administrative reforms of 1793 and 1970 consequently occupying the same territory from...
comprising the entire island. These six administrations merged on January 1, 2003 forming the new Bornholm Regional Municipality
Bornholm
Bornholm is a Danish island in the Baltic Sea located to the east of the rest of Denmark, the south of Sweden, and the north of Poland. The main industries on the island include fishing, arts and crafts like glass making and pottery using locally worked clay, and dairy farming. Tourism is...
, giving it a status resembling the municipalities of Copenhagen
Copenhagen
Copenhagen is the capital and largest city of Denmark, with an urban population of 1,199,224 and a metropolitan population of 1,930,260 . With the completion of the transnational Øresund Bridge in 2000, Copenhagen has become the centre of the increasingly integrating Øresund Region...
and Frederiksberg
Frederiksberg
Frederiksberg Kommune is a municipality on the island of Zealand in Denmark. It surrounded by the city of Copenhagen. The municipality, co-extensive with its seat, covers an area of and has a total population of 98,782 making it the smallest municipality in Denmark area-wise, the fifth most...
. On January 1, 2007, these three municipalities lost their special status and their responsibilities and powers have been reduced to the same level as the 95 other municipalities.

Greenland
Greenland
Greenland is an autonomous country within the Kingdom of Denmark, located between the Arctic and Atlantic Oceans, east of the Canadian Arctic Archipelago. Though physiographically a part of the continent of North America, Greenland has been politically and culturally associated with Europe for...
and the Faroe Islands
Faroe Islands
The Faroe Islands are an island group situated between the Norwegian Sea and the North Atlantic Ocean, approximately halfway between Scotland and Iceland. The Faroe Islands are a self-governing territory within the Kingdom of Denmark, along with Denmark proper and Greenland...
are also part of the Kingdom of Denmark, but both enjoy internal autonomy. Both are largely self-governing, and each community sends two members to the Danish Parliament
Folketing
The Folketing , is the national parliament of Denmark. The name literally means "People's thing"—that is, the people's governing assembly. It is located in Christiansborg Palace, on the islet of Slotsholmen in central Copenhagen....
. The Faroe Islands obtained self-government in 1948; previously the islands had the status of a Danish amt.

A government proposal in 2004 called for the counties to be replaced by five large regions
Regions of Denmark
The Regions of Denmark were created as part of the 2007 Danish Municipal Reform. The five regions replace the former sixteen counties . At the same time, the number of municipalities was cut from 270 to 98. The reform was made effective on 1 January 2007.- List of regions :The names of the regions...
with health care
Health care
Health care is the diagnosis, treatment, and prevention of disease, illness, injury, and other physical and mental impairments in humans. Health care is delivered by practitioners in medicine, chiropractic, dentistry, nursing, pharmacy, allied health, and other care providers...
as their sole responsibilities; two regions in Jutland
Jutland
Jutland , historically also called Cimbria, is the name of the peninsula that juts out in Northern Europe toward the rest of Scandinavia, forming the mainland part of Denmark. It has the North Sea to its west, Kattegat and Skagerrak to its north, the Baltic Sea to its east, and the Danish–German...
, two regions in Zealand and one region covering Funen
Funen
Funen , with a size of 2,984 km² , is the third-largest island of Denmark following Zealand and Vendsyssel-Thy, and the 163rd largest island of the world. Funen is located in the central part of the country and has a population of 454,358 inhabitants . The main city is Odense, connected to the...
and the southernmost part of Jutland. The proposal also required the municipalities to merge reducing them from 271 to about 100, with a minimum of 20,000 inhabitants in each municipality, although some exceptions were made to this rule. From 2007 25 municipalities have fewer than 30,000 inhabitants each, with the average number of inhabitants being over 55,500 per municipality. Only the United Kingdom
United Kingdom
The United Kingdom of Great Britain and Northern IrelandIn the United Kingdom and Dependencies, other languages have been officially recognised as legitimate autochthonous languages under the European Charter for Regional or Minority Languages...
and Ireland
Republic of Ireland
Ireland , described as the Republic of Ireland , is a sovereign state in Europe occupying approximately five-sixths of the island of the same name. Its capital is Dublin. Ireland, which had a population of 4.58 million in 2011, is a constitutional republic governed as a parliamentary democracy,...
have more populous entities at the lowest political administrative level.

The reform was confirmed by the Danish Parliament on February 24, 2005, and the counties were abolished on January 1, 2007.