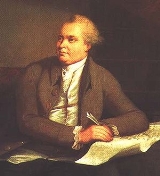 Encyclopedia
Daniel Carlsson Solander or Daniel Charles Solander (19 February 1733 – 13 May 1782) was a Swedish
Sweden
Sweden , officially the Kingdom of Sweden , is a Nordic country on the Scandinavian Peninsula in Northern Europe. Sweden borders with Norway and Finland and is connected to Denmark by a bridge-tunnel across the Öresund....
naturalist
Naturalist
Naturalist may refer to:* Practitioner of natural history* Conservationist* Advocate of naturalism * Naturalist , autobiography-See also:* The American Naturalist, periodical* Naturalism...
and an apostle of Carl Linnaeus
Apostles of Linnaeus
The Apostles of Linnaeus were a group of students who carried out botanical and zoological expeditions throughout the world that were either devised or approved by botanist Carl Linnaeus. The expeditions took place during the latter half of the 18th century and the students were designated...
. Solander was the first university educated scientist to set foot on Australian soil.

In 1768 Solander and his assistant Herman Spöring were employed by Joseph Banks
Joseph Banks
Sir Joseph Banks, 1st Baronet, GCB, PRS was an English naturalist, botanist and patron of the natural sciences. He took part in Captain James Cook's first great voyage . Banks is credited with the introduction to the Western world of eucalyptus, acacia, mimosa and the genus named after him,...
, to join him on James Cook
James Cook
Captain James Cook, FRS, RN was a British explorer, navigator and cartographer who ultimately rose to the rank of captain in the Royal Navy...
's first voyage to the Pacific Ocean
Pacific Ocean
The Pacific Ocean is the largest of the Earth's oceanic divisions. It extends from the Arctic in the north to the Southern Ocean in the south, bounded by Asia and Australia in the west, and the Americas in the east.At 165.2 million square kilometres in area, this largest division of the World...
on board the Endeavour
HM Bark Endeavour
HMS Endeavour, also known as HM Bark Endeavour, was a British Royal Navy research vessel commanded by Lieutenant James Cook on his first voyage of discovery, to Australia and New Zealand from 1769 to 1771....
.
They were the botanists who inspired the name Botanist Bay (which later became Botany Bay
Botany Bay
Botany Bay is a bay in Sydney, New South Wales, a few kilometres south of the Sydney central business district. The Cooks River and the Georges River are the two major tributaries that flow into the bay...
) for the first landing place of Cook's expedition in Australia
Australia
Australia , officially the Commonwealth of Australia, is a country in the Southern Hemisphere comprising the mainland of the Australian continent, the island of Tasmania, and numerous smaller islands in the Indian and Pacific Oceans. It is the world's sixth-largest country by total area...
.
Solander helped make and describe an important collection of Australian plants while the Endeavour was beached at the site of present-day Cooktown
Cooktown, Queensland
Cooktown is a small town located at the mouth of the Endeavour River, on Cape York Peninsula in Far North Queensland where James Cook beached his ship, the Endeavour, for repairs in 1770. At the 2006 census, Cooktown had a population of 1,336...
for nearly 7 weeks, after being damaged on the Great Barrier Reef
Great Barrier Reef
The Great Barrier Reef is the world'slargest reef system composed of over 2,900 individual reefs and 900 islands stretching for over 2,600 kilometres over an area of approximately...
. These collections later formed the basis of Banks' Florilegium
Banks' Florilegium
Banks' Florilegium is a collection of copperplate engravings of plants collected by Sir Joseph Banks and Daniel Solander while they accompanied Captain James Cook on his voyage around the world between 1768 and 1771...
.

On their return in 1771 Solander became Banks's secretary and librarian and lived in his house at Soho Square. In 1772 he accompanied Banks on his voyage to Iceland
Iceland
Iceland , described as the Republic of Iceland, is a Nordic and European island country in the North Atlantic Ocean, on the Mid-Atlantic Ridge. Iceland also refers to the main island of the country, which contains almost all the population and almost all the land area. The country has a population...
, the Faroes
Faroe Islands
The Faroe Islands are an island group situated between the Norwegian Sea and the North Atlantic Ocean, approximately halfway between Scotland and Iceland. The Faroe Islands are a self-governing territory within the Kingdom of Denmark, along with Denmark proper and Greenland...
and the Orkney Islands
Orkney Islands
Orkney also known as the Orkney Islands , is an archipelago in northern Scotland, situated north of the coast of Caithness...
. Between 1773 and 1782 he was Keeper of the Natural History Department of the British Museum. In 1773 he was elected a foreign member of the Royal Swedish Academy of Sciences
Royal Swedish Academy of Sciences
The Royal Swedish Academy of Sciences or Kungliga Vetenskapsakademien is one of the Royal Academies of Sweden. The Academy is an independent, non-governmental scientific organization which acts to promote the sciences, primarily the natural sciences and mathematics.The Academy was founded on 2...
.

Solander invented the book-form box known as the Solander box
Solander box
A solander box or clamshell case , is a book-form case used for storing manuscripts, maps, prints, documents, old and precious books, etc. It is commonly used in archives, print rooms and libraries...
which is still used in libraries and archives as the most suitable way of storing prints, drawings, herbarium
Herbarium
In botany, a herbarium – sometimes known by the Anglicized term herbar – is a collection of preserved plant specimens. These specimens may be whole plants or plant parts: these will usually be in a dried form, mounted on a sheet, but depending upon the material may also be kept in...
materials and some manuscripts.

Solander died at Banks' home in Soho Square of a stroke
Stroke
A stroke, previously known medically as a cerebrovascular accident , is the rapidly developing loss of brain function due to disturbance in the blood supply to the brain. This can be due to ischemia caused by blockage , or a hemorrhage...
, aged 49, at 9.30pm on 13 May 1782. An autopsy was performed the next day, and revealed a brain haemorrhage.

It has been claimed that Solander deserves a great deal more recognition than he has received, and that he was denied his legacy by the high standing of Banks, who treated Solander, and Jonas Dryander before him, as his servants rather than as botanists of equal standing to others in the botanical establishment. The treatment and recognition of these two stands in contrast to that of Robert Brown
Robert Brown (botanist)
Robert Brown was a Scottish botanist and palaeobotanist who made important contributions to botany largely through his pioneering use of the microscope...
, the third in the succession of Banks' botanists, who was feted as the pre-eminent botanist of his day. This contrast could be due to the fact that Brown was British, whereas the others were foreigners; or because Banks was already in decline by the time he employed Brown.

Solander Gardens in the east end of London is named after him, as are the Solander Islands
Solander Islands
The Solander Islands are a small chain of uninhabited volcanic islets lying at , close to the western end of the Foveaux Strait in southern New Zealand...
off New Zealand
New Zealand
New Zealand is an island country in the south-western Pacific Ocean comprising two main landmasses and numerous smaller islands. The country is situated some east of Australia across the Tasman Sea, and roughly south of the Pacific island nations of New Caledonia, Fiji, and Tonga...
's South Island. One of the many plants named in his honour is Nothofagus solandri. Solander was associated with Banks in Illustrations of the Botany of Captain Cook's Voyage Round the World, and his The Natural History of Many Curious and Uncommon Zoophytes, Collected by the late John Ellis, (1786) was published posthumously.

In Solander's birth town Piteå
Piteå
Piteå is a locality and the seat of Piteå Municipality in Norrbotten County, Sweden. The town has 22,650 inhabitants out of a municipal total of 41,000 in 2008.- Geography :...
the Solander Science Park houses a number of cleantech companies and research organizations.