Encyclopedia
In botany
Botany
Botany, plant science, or plant biology is a branch of biology that involves the scientific study of plant life. Traditionally, botany also included the study of fungi, algae and viruses...
, a herbarium (plural: herbaria) – sometimes known by the Anglicized term herbar – is a collection of preserved plant
Plant
Plants are living organisms belonging to the kingdom Plantae. Precise definitions of the kingdom vary, but as the term is used here, plants include familiar organisms such as trees, flowers, herbs, bushes, grasses, vines, ferns, mosses, and green algae. The group is also called green plants or...
specimens. These specimens may be whole plants or plant parts: these will usually be in a dried form, mounted on a sheet, but depending upon the material may also be kept in alcohol or other preservative. The same term is often used in mycology
Mycology
Mycology is the branch of biology concerned with the study of fungi, including their genetic and biochemical properties, their taxonomy and their use to humans as a source for tinder, medicinals , food and entheogens, as well as their dangers, such as poisoning or...
to describe an equivalent collection of preserved fungi, otherwise known as a fungarium.

The term can also refer to the building where the specimens are stored, or the scientific institute that not only stores but researches these specimens. The specimens in a herbarium are often used as reference material in describing plant taxa
Taxon
|thumb|270px|[[African elephants]] form a widely-accepted taxon, the [[genus]] LoxodontaA taxon is a group of organisms, which a taxonomist adjudges to be a unit. Usually a taxon is given a name and a rank, although neither is a requirement...
; some specimens may be types.

To preserve their form and color, plants collected in the field are spread flat on sheets of newsprint and dried, usually in a plant press, between blotters or absorbent paper. The specimens, which are then mounted on sheets of stiff white paper, are labeled with all essential data, such as date and place found, description of the plant, altitude, and special habitat conditions. The sheet is then placed in a protective case. As a precaution against insect attack, the pressed plant is frozen or poisoned and the case disinfected.

Certain groups of plants are soft, bulky, or otherwise not amenable to drying and mounting on sheets. For these plants, other methods of preparation and storage may be used. For example, conifer cone
Conifer cone
A cone is an organ on plants in the division Pinophyta that contains the reproductive structures. The familiar woody cone is the female cone, which produces seeds. The male cones, which produce pollen, are usually herbaceous and much less conspicuous even at full maturity...
s and palm
Arecaceae
Arecaceae or Palmae , are a family of flowering plants, the only family in the monocot order Arecales. There are roughly 202 currently known genera with around 2600 species, most of which are restricted to tropical, subtropical, and warm temperate climates...
fronds may be stored in labeled boxes. Representative flowers or fruits may be pickled in formaldehyde
Formaldehyde
Formaldehyde is an organic compound with the formula CH2O. It is the simplest aldehyde, hence its systematic name methanal.Formaldehyde is a colorless gas with a characteristic pungent odor. It is an important precursor to many other chemical compounds, especially for polymers...
to preserve their three-dimensional structure. Small specimens, such as moss
Moss
Mosses are small, soft plants that are typically 1–10 cm tall, though some species are much larger. They commonly grow close together in clumps or mats in damp or shady locations. They do not have flowers or seeds, and their simple leaves cover the thin wiry stems...
es and lichen
Lichen
Lichens are composite organisms consisting of a symbiotic organism composed of a fungus with a photosynthetic partner , usually either a green alga or cyanobacterium...
s, are often air-dried and packaged in small paper envelopes.

No matter the method of preservation, detailed information on where and when the plant was collected, habitat, color (since it may fade over time), and the name of collector is usually included. 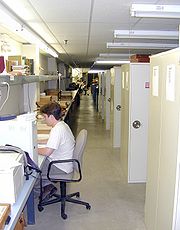 Most herbaria utilize a standard system of organizing their specimens into herbarium cases. Specimen sheets are stacked in groups by the species
Species
In biology, a species is one of the basic units of biological classification and a taxonomic rank. A species is often defined as a group of organisms capable of interbreeding and producing fertile offspring. While in many cases this definition is adequate, more precise or differing measures are...
to which they belong and placed into a large lightweight folder
Folder
Folder may refer:* File folder, a kind of folder that holds loose papers* Folder , a virtual container within a digital file system, in which groups of files and other folders can be kept and organized...
that is labelled on the bottom edge. Groups of species folders are then placed together into larger, heavier folders by genus
Genus
In biology, a genus is a low-level taxonomic rank used in the biological classification of living and fossil organisms, which is an example of definition by genus and differentia...
. The genus folders are then sorted by taxonomic family
Family (biology)
In biological classification, family is* a taxonomic rank. Other well-known ranks are life, domain, kingdom, phylum, class, order, genus, and species, with family fitting between order and genus. As for the other well-known ranks, there is the option of an immediately lower rank, indicated by the...
according to the standard system selected for use by the herbarium and placed into pigeonhole
Pigeonhole
Pigeonhole may refer to:*Pigeonholes, nesting spaces formed in a dovecote *Pigeonhole, one of the boxes in a pigeon coop...
s in herbarium cabinets.

Modern herbaria often maintain electronic databases of their collections. Many herbaria have initiatives to digitize
Digitizing
Digitizing or digitization is the representation of an object, image, sound, document or a signal by a discrete set of its points or samples. The result is called digital representation or, more specifically, a digital image, for the object, and digital form, for the signal...
specimens to produce a virtual herbarium
Virtual herbarium
In botany, a virtual herbarium is a herbarium in a digitized form. That is, it concerns a collection of digital images of preserved plants or plant parts. Virtual herbaria often are established to improve availability of specimens to a wider audience...
. These records and images are made publicly accessible via the Internet
Internet
The Internet is a global system of interconnected computer networks that use the standard Internet protocol suite to serve billions of users worldwide...
when possible.

Herbaria are essential for the study of plant taxonomy
Plant taxonomy
Plant taxonomy is the science that finds, describes, classifies, identifies, and names plants. It thus is one of the main branches of taxonomy.Plant taxonomy is closely allied to plant systematics, and there is no sharp boundary between the two...
, the study of geographic distributions, and the stabilizing of nomenclature. Thus it is desirable to include in a specimen as much of the plant as possible (e.g., flowers, stems, leaves, seed, and fruit). Linnaeus'
Carolus Linnaeus
Carl Linnaeus , also known after his ennoblement as , was a Swedish botanist, physician, and zoologist, who laid the foundations for the modern scheme of binomial nomenclature. He is known as the father of modern taxonomy, and is also considered one of the fathers of modern ecology...
herbarium now belongs to the Linnean Society in England.

Specimens housed in herbaria may be used to catalogue or identify the flora
Flora
Flora is the plant life occurring in a particular region or time, generally the naturally occurring or indigenous—native plant life. The corresponding term for animals is fauna.-Etymology:...
of an area. A large collection from a single area is used in writing a field guide or manual to aid in the identification of plants that grow there. With more specimens available, the author of the guide will better understand the variability of form in the plants and the natural distribution over which the plants grow.

Herbaria also preserve an historical record of change in vegetation
Vegetation
Vegetation is a general term for the plant life of a region; it refers to the ground cover provided by plants. It is a general term, without specific reference to particular taxa, life forms, structure, spatial extent, or any other specific botanical or geographic characteristics. It is broader...
over time. In some cases, plants become extinct
Extinction
In biology and ecology, extinction is the end of an organism or of a group of organisms , normally a species. The moment of extinction is generally considered to be the death of the last individual of the species, although the capacity to breed and recover may have been lost before this point...
in one area, or may become extinct altogether. In such cases, specimens preserved in an herbarium can represent the only record of the plant's original distribution. Environmental scientists make use of such data to track changes in climate
Climate
Climate encompasses the statistics of temperature, humidity, atmospheric pressure, wind, rainfall, atmospheric particle count and other meteorological elemental measurements in a given region over long periods...
and human impact.

Many kinds of scientists use herbaria to preserve voucher specimens; representative samples of plants used in a particular study to demonstrate precisely the source of their data.

They may also be a repository of viable seeds for rare species. 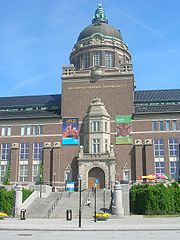 Many universities, museums, and botanical gardens maintain herbaria. Herbaria have also proven very useful as sources of plant DNA
DNA
Deoxyribonucleic acid is a nucleic acid that contains the genetic instructions used in the development and functioning of all known living organisms . The DNA segments that carry this genetic information are called genes, but other DNA sequences have structural purposes, or are involved in...
for use in taxonomy and molecular systematics. The largest herbaria in the world, in approximate order of decreasing size, are: