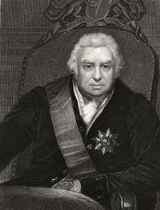 Overview
Sir Joseph Banks, 1st Baronet, GCB, PRS
President of the Royal Society
The president of the Royal Society is the elected director of the Royal Society of London. After informal meetings at Gresham College, the Royal Society was founded officially on 15 July 1662 for the encouragement of ‘philosophical studies’, by a royal charter which nominated William Brouncker as...
(19 June 1820) was an English naturalist
Natural history
Natural history is the scientific research of plants or animals, leaning more towards observational rather than experimental methods of study, and encompasses more research published in magazines than in academic journals. Grouped among the natural sciences, natural history is the systematic study...
, botanist
Botany
Botany, plant science, or plant biology is a branch of biology that involves the scientific study of plant life. Traditionally, botany also included the study of fungi, algae and viruses...
and patron of the natural sciences. He took part in Captain James Cook
James Cook
Captain James Cook, FRS, RN was a British explorer, navigator and cartographer who ultimately rose to the rank of captain in the Royal Navy...
's first great voyage
First voyage of James Cook
The first voyage of James Cook was a combined Royal Navy and Royal Society expedition to the south Pacific ocean aboard HMS Endeavour, from 1768 to 1771...
(1768–1771). Banks is credited with the introduction to the Western world
Western world
The Western world, also known as the West and the Occident , is a term referring to the countries of Western Europe , the countries of the Americas, as well all countries of Northern and Central Europe, Australia and New Zealand...
of eucalyptus
Eucalyptus
Eucalyptus is a diverse genus of flowering trees in the myrtle family, Myrtaceae. Members of the genus dominate the tree flora of Australia...
, acacia
Acacia
Acacia is a genus of shrubs and trees belonging to the subfamily Mimosoideae of the family Fabaceae, first described in Africa by the Swedish botanist Carl Linnaeus in 1773. Many non-Australian species tend to be thorny, whereas the majority of Australian acacias are not...
, mimosa
Mimosa
Mimosa is a genus of about 400 species of herbs and shrubs, in the subfamily Mimosoideae of the legume family Fabaceae. The generic name is derived from the Greek word μιμος , meaning "mimic."...
and the genus
Genus
In biology, a genus is a low-level taxonomic rank used in the biological classification of living and fossil organisms, which is an example of definition by genus and differentia...
named after him, Banksia
Banksia
Banksia is a genus of around 170 species in the plant family Proteaceae. These Australian wildflowers and popular garden plants are easily recognised by their characteristic flower spikes and fruiting "cones" and heads. When it comes to size, banksias range from prostrate woody shrubs to trees up...
. Approximately 80 species of plants bear Banks's name. Banks was also the leading founder of the African Association
African Association
The Association for Promoting the Discovery of the Interior Parts of Africa , founded in London on June 9, 1788, was a British club dedicated to the exploration of West Africa, with the mission of discovering the origin and course of the Niger River and the location of Timbuktu, the "lost city" of...
, a British organization dedicated to the exploration of Africa, and a member of the Society of Dilettanti, which helped to establish the Royal Academy
Royal Academy
The Royal Academy of Arts is an art institution based in Burlington House on Piccadilly, London. The Royal Academy of Arts has a unique position in being an independent, privately funded institution led by eminent artists and architects whose purpose is to promote the creation, enjoyment and...
.
Banks was born in London to William Banks, a wealthy Lincolnshire
Lincolnshire
Lincolnshire is a county in the east of England. It borders Norfolk to the south east, Cambridgeshire to the south, Rutland to the south west, Leicestershire and Nottinghamshire to the west, South Yorkshire to the north west, and the East Riding of Yorkshire to the north. It also borders...
country squire
Squire
The English word squire is a shortened version of the word Esquire, from the Old French , itself derived from the Late Latin , in medieval or Old English a scutifer. The Classical Latin equivalent was , "arms bearer"...
and member of the House of Commons
British House of Commons
The House of Commons is the lower house of the Parliament of the United Kingdom, which also comprises the Sovereign and the House of Lords . Both Commons and Lords meet in the Palace of Westminster. The Commons is a democratically elected body, consisting of 650 members , who are known as Members...
, and his wife Sarah, daughter of William Bate.

O, how glorious would it be to set my heel upon the Pole and turn myself 360 degrees in a second!

Who knows but that England may revive in New South Wales when it has sunk in Europe.