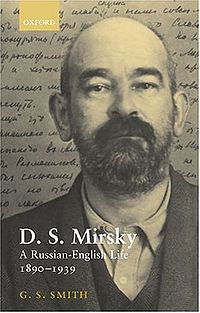 D.S. Mirsky is the English pen-name of Dmitry Petrovich Svyatopolk-Mirsky , often known as Prince Mirsky ( – 6 June 1939), a Russia
Russia
Russia or , officially known as both Russia and the Russian Federation , is a country in northern Eurasia. It is a federal semi-presidential republic, comprising 83 federal subjects...
n political and literary historian who promoted the knowledge and translations of Russian literature
Russian literature
Russian literature refers to the literature of Russia or its émigrés, and to the Russian-language literature of several independent nations once a part of what was historically Russia or the Soviet Union...
in Britain and of English literature
English literature
English literature is the literature written in the English language, including literature composed in English by writers not necessarily from England; for example, Robert Burns was Scottish, James Joyce was Irish, Joseph Conrad was Polish, Dylan Thomas was Welsh, Edgar Allan Poe was American, J....
in the Soviet Union
Soviet Union
The Soviet Union , officially the Union of Soviet Socialist Republics , was a constitutionally socialist state that existed in Eurasia between 1922 and 1991....
.

A scion of the Svyatopolk-Mirsky family, son of kniaz Pyotr Dmitrievich Sviatopolk-Mirskii
Pyotr Dmitrievich Sviatopolk-Mirskii
Prince Pyotr Dmitrievich Sviatopolk-Mirskii was a Russian politician and police official, Minister of the Interior in 1904–1905. He was the son of the general Dmitry Ivanovitch Sviatopolk-Mirskii and father of the literary historian D. S. Mirsky....
, Imperial Russian Minister of Interior, he relinquished his princely title at an early age. During his school years, he became interested in the poetry of Russian Symbolism
Russian Symbolism
Russian symbolism was an intellectual and artistic movement predominant at the end of the 19th and beginning of the 20th century. It represented the Russian branch of the symbolist movement in European art, and was mostly known for its contributions to Russian poetry.-Russian symbolism in...
and started writing poems himself. He saw service in the Russian army during the World War I
World War I
World War I , which was predominantly called the World War or the Great War from its occurrence until 1939, and the First World War or World War I thereafter, was a major war centred in Europe that began on 28 July 1914 and lasted until 11 November 1918...
, joined the White movement
White movement
The White movement and its military arm the White Army - known as the White Guard or the Whites - was a loose confederation of Anti-Communist forces.The movement comprised one of the politico-military Russian forces who fought...
as a member of Denikin
Anton Ivanovich Denikin
Anton Ivanovich Denikin was Lieutenant General of the Imperial Russian Army and one of the foremost generals of the White movement in the Russian Civil War.- Childhood :...
's staff and eventually emigrated to Great Britain
Great Britain
Great Britain or Britain is an island situated to the northwest of Continental Europe. It is the ninth largest island in the world, and the largest European island, as well as the largest of the British Isles...
in 1921.

While teaching Russian literature in the University of London
University of London
-20th century:Shortly after 6 Burlington Gardens was vacated, the University went through a period of rapid expansion. Bedford College, Royal Holloway and the London School of Economics all joined in 1900, Regent's Park College, which had affiliated in 1841 became an official divinity school of the...
, Mirsky published his landmark study A History of Russian Literature: From Its Beginnings to 1900, which still remains a standard English-language guide to classical Russian literature
Russian literature
Russian literature refers to the literature of Russia or its émigrés, and to the Russian-language literature of several independent nations once a part of what was historically Russia or the Soviet Union...
. Vladimir Nabokov
Vladimir Nabokov
Vladimir Vladimirovich Nabokov was a multilingual Russian novelist and short story writer. Nabokov wrote his first nine novels in Russian, then rose to international prominence as a master English prose stylist...
recommended it to his students as "the best history of Russian literature in any language, including Russian". This work was followed with the Contemporary Russian Literature, 1881–1925, which was somewhat marred by Mirsky's prejudiced view of Anton Chekhov
Anton Chekhov
Anton Pavlovich Chekhov was a Russian physician, dramatist and author who is considered to be among the greatest writers of short stories in history. His career as a dramatist produced four classics and his best short stories are held in high esteem by writers and critics...
and his inordinate liking for some of the Russian Formalists.

Mirsky was a founding member of the Eurasia Movement and the chief editor of the periodical Eurasia, his own views gradually evolving towards Marxism
Marxism
Marxism is an economic and sociopolitical worldview and method of socioeconomic inquiry that centers upon a materialist interpretation of history, a dialectical view of social change, and an analysis and critique of the development of capitalism. Marxism was pioneered in the early to mid 19th...
. He also is usually credited with coining the term National Bolshevism
National Bolshevism
National Bolshevism is a political movement that claims to combine elements of nationalism and Bolshevism. It is often anti-capitalist in tone, and sympathetic towards certain nationalist forms of communism and socialism...
. In 1931, he joined the Communist Party of Great Britain
Communist Party of Great Britain
The Communist Party of Great Britain was the largest communist party in Great Britain, although it never became a mass party like those in France and Italy. It existed from 1920 to 1991.-Formation:...
and asked Maxim Gorky
Maxim Gorky
Alexei Maximovich Peshkov , primarily known as Maxim Gorky , was a Russian and Soviet author, a founder of the Socialist Realism literary method and a political activist.-Early years:...
if he could procure his pardon by Soviet authorities. The permission to return to the USSR was granted him in 1932. On seeing him off to Russia, Virginia Woolf
Virginia Woolf
Adeline Virginia Woolf was an English author, essayist, publisher, and writer of short stories, regarded as one of the foremost modernist literary figures of the twentieth century....
wrote in her diary that "soon they will put a bullet in his head". Five years later, during the Great Purge
Great Purge
The Great Purge was a series of campaigns of political repression and persecution in the Soviet Union orchestrated by Joseph Stalin from 1936 to 1938...
, Mirsky was arrested by the NKVD
NKVD
The People's Commissariat for Internal Affairs was the public and secret police organization of the Soviet Union that directly executed the rule of power of the Soviets, including political repression, during the era of Joseph Stalin....
. Mirsky’s arrest may have been caused by a chance meeting with his friend, the British historian E. H. Carr who visiting the Soviet Union in 1937. Carr stumbled into Prince Mirsky on the streets of Leningrad (modern Saint Petersburg, Russia), and despite Prince Mirsky's best efforts to pretend not to know him, Carr persuaded his old friend to have lunch with him. Since this was at the height of the Yezhovshchina, and any Soviet citizen who had any unauthorized contact with a foreigner was likely to be regarded as a spy, the NKVD arrested Mirsky as a British spy. He died in one of the gulag
Gulag
The Gulag was the government agency that administered the main Soviet forced labor camp systems. While the camps housed a wide range of convicts, from petty criminals to political prisoners, large numbers were convicted by simplified procedures, such as NKVD troikas and other instruments of...
labor camps in 1939. Although his magnum opus
Masterpiece
Masterpiece in modern usage refers to a creation that has been given much critical praise, especially one that is considered the greatest work of a person's career or to a work of outstanding creativity, skill or workmanship....
was eventually published in Russia, Mirsky's reputation in his native country remains sparse.

Korney Chukovsky
Korney Chukovsky
Korney Ivanovich Chukovsky was one of the most popular children's poets in the Russian language. His poems, Doctor Aybolit , The Giant Roach , The Crocodile , and Wash'em'clean have been favourites with many generations of Russophone children...
gives a lively portrait of Mirsky in his diary entry for 27 January 1935:


I liked him enormously: the vast erudition, the sincerity, the literary talent, the ludicrous beard and ludicrous bald spot, the suit which, though made in England, hung loosely on him, shabby and threadbare, the way he had of coming out with a sympathetic ee-ee-ee (like a guttural piglet squeal) after each sentence you uttered—it was all so amusing and endearing. Though he had very little money—he's a staunch democrat—he did inherit his well-born ancestors' gourmandise. His stomach will be the ruin of him. Every day he leaves his wretched excuse for a cap and overcoat with the concierge and goes into the luxurious restaurant [of the Hotel National in Moscow], spending no less than forty rubles on a meal (since he drinks as well as eats) plus four to tip the waiter and one to tip the concierge.

Malcolm Muggeridge
Malcolm Muggeridge
Thomas Malcolm Muggeridge was an English journalist, author, media personality, and satirist. During World War II, he was a soldier and a spy...
, who met Mirsky after his return to USSR, apparently met one of the author's critics, a French
French language
French is a Romance language spoken as a first language in France, the Romandy region in Switzerland, Wallonia and Brussels in Belgium, Monaco, the regions of Quebec and Acadia in Canada, and by various communities elsewhere. Second-language speakers of French are distributed throughout many parts...
correspondent to Russia named Luciani, who had this to say of Mirsky:

Mirsky had pulled off the unusual feat of managing to be a parasite under three regimes — as a prince under Czarism, as a professor under Capitalism
Capitalism
Capitalism is an economic system that became dominant in the Western world following the demise of feudalism. There is no consensus on the precise definition nor on how the term should be used as a historical category...
, and as an homme-de-lettres under Communism
Communism
Communism is a social, political and economic ideology that aims at the establishment of a classless, moneyless, revolutionary and stateless socialist society structured upon common ownership of the means of production...
.