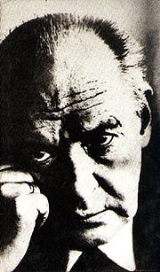 Overview
Vladimir Vladimirovich Nabokov was a multilingual Russian
Russians
The Russian people are an East Slavic ethnic group native to Russia, speaking the Russian language and primarily living in Russia and neighboring countries....
novelist and short story writer. Nabokov wrote his first nine novels in Russian, then rose to international prominence as a master English prose stylist. He also made contributions to entomology
Entomology
Entomology is the scientific study of insects, a branch of arthropodology...
and had a serious interest in chess problems.

Nabokov's Lolita
Lolita
Lolita is a novel by Vladimir Nabokov, first written in English and published in 1955 in Paris and 1958 in New York, and later translated by the author into Russian...
(1955) is frequently cited as among his most important novels and is his most widely known, exhibiting the love of intricate word play and synesthetic
Synesthesia
Synesthesia , from the ancient Greek , "together," and , "sensation," is a neurologically based condition in which stimulation of one sensory or cognitive pathway leads to automatic, involuntary experiences in a second sensory or cognitive pathway...
detail that characterised all his works.

What is your favorite works of Nabokov?
More

What is this jest in majesty? This ass in passion? How do God and Devil combine to form a live dog?

Dark pictures, thrones, the stones that pilgrims kiss Poems that take a thousand years to die But ape the immortality of this Red label on a little butterfly.

"A Discovery" (December 1941); published as "On Discovering a Butterfly" in The New Yorker (15 May 1943); also in Nabokov's Butterflies: Unpublished and Uncollected Writings (2000) Edited and annotated by Brian Boyd and Robert Michael Pyle, p. 274

I hastened to quench a thirst that had been burning a hole in the mixed metaphor of my life ever since I had fondled a quite different Dolly thirteen years earlier.

Genius still means to me, in my Russian, fastidiousness and pride of phrase, a unique dazzling gift. The gift of James Joyce, and not the talent of Henry James.

As quoted in What Is the Sangha?: The Nature of Spritual Community (2001) by Sangharakshita|Sangharakshita, p. 136

Curiosity is insubordination in its purest form.

The cradle rocks above an abyss, and common sense tells us that our existence is but a brief crack of light between two eternities of darkness. Although the two are identical twins, man, as a rule, views the prenatal abyss with more calm than the one he is heading for (at some forty-five hundred heartbeats an hour.)