Encyclopedia
Curd Gustav Andreas Gottlieb Franz Jürgens (1915–1982) was a German-Austrian stage and film actor
Actor
An actor is a person who acts in a dramatic production and who works in film, television, theatre, or radio in that capacity...
. He was usually billed in English-speaking films as Curt Jurgens.

Jürgens was born on 13 December 1915 in the Munich borough of Solln
Thalkirchen-Obersendling-Forstenried-Fürstenried-Solln
Thalkirchen-Obersendling-Forstenried-Fürstenried-Solln is the 19th borough of Munich, Germany, comprising the extreme southern part of the city on the left back of the river Isar. After the administrative reform, the boroughs Thalkirchen-Obersendling-Forstenried and Solln were incorporated, thus...
, Kingdom of Bavaria
Kingdom of Bavaria
The Kingdom of Bavaria was a German state that existed from 1806 to 1918. The Bavarian Elector Maximilian IV Joseph of the House of Wittelsbach became the first King of Bavaria in 1806 as Maximilian I Joseph. The monarchy would remain held by the Wittelsbachs until the kingdom's dissolution in 1918...
, German Empire
German Empire
The German Empire refers to Germany during the "Second Reich" period from the unification of Germany and proclamation of Wilhelm I as German Emperor on 18 January 1871, to 1918, when it became a federal republic after defeat in World War I and the abdication of the Emperor, Wilhelm II.The German...
. His father was a trader from Hamburg and his mother a French teacher. He began his working career as a journalist
Journalist
A journalist collects and distributes news and other information. A journalist's work is referred to as journalism.A reporter is a type of journalist who researchs, writes, and reports on information to be presented in mass media, including print media , electronic media , and digital media A...
before becoming an actor at the urging of his actress wife, Louise Basler. He spent much of his early acting career on the stage in Vienna.

Jürgens became an Austrian citizen after the war.

Although he appeared in over 100 films, Jürgens considered himself primarily a stage actor. His last stage appearance was in 1980 as Bassa Selim in Mozart
Wolfgang Amadeus Mozart
Wolfgang Amadeus Mozart , baptismal name Johannes Chrysostomus Wolfgangus Theophilus Mozart , was a prolific and influential composer of the Classical era. He composed over 600 works, many acknowledged as pinnacles of symphonic, concertante, chamber, piano, operatic, and choral music...
's opera
Opera
Opera is an art form in which singers and musicians perform a dramatic work combining text and musical score, usually in a theatrical setting. Opera incorporates many of the elements of spoken theatre, such as acting, scenery, and costumes and sometimes includes dance...
Die Entführung aus dem Serail
Die Entführung aus dem Serail
Die Entführung aus dem Serail is an opera Singspiel in three acts by Wolfgang Amadeus Mozart. The German libretto is by Christoph Friedrich Bretzner with adaptations by Gottlieb Stephanie...
touring Japan with the Vienna State Opera
Vienna State Opera
The Vienna State Opera is an opera house – and opera company – with a history dating back to the mid-19th century. It is located in the centre of Vienna, Austria. It was originally called the Vienna Court Opera . In 1920, with the replacement of the Habsburg Monarchy by the First Austrian...
. He also directed a few films with limited success, and wrote screenplay
Screenplay
A screenplay or script is a written work that is made especially for a film or television program. Screenplays can be original works or adaptations from existing pieces of writing. In them, the movement, actions, expression, and dialogues of the characters are also narrated...
s.

Showing his sense of humor, he titled his 1976 autobiography
Autobiography
An autobiography is a book about the life of a person, written by that person.-Origin of the term:...
… und kein bißchen weise (And not a Bit Wise).

Jürgens maintained a home in France, but frequently returned to Vienna to perform on stage and that was where he died of a heart attack
Myocardial infarction
Myocardial infarction or acute myocardial infarction , commonly known as a heart attack, results from the interruption of blood supply to a part of the heart, causing heart cells to die...
on 18 June 1982. He was interred in the city's Zentralfriedhof
Zentralfriedhof
The Zentralfriedhof is one of the largest cemeteries in the world, largest by number of interred in Europe and most famous cemetery among Vienna's nearly 50 cemeteries.-Name and location:...
. Jürgens had suffered a heart attack several years before. During this he had a near-death experience where he claimed he died and went to Hell.

He was a tall man, standing 1.92 metre tall. Brigitte Bardot nicknamed him "the Norman
Normans
The Normans were the people who gave their name to Normandy, a region in northern France. They were descended from Norse Viking conquerors of the territory and the native population of Frankish and Gallo-Roman stock...
Wardrobe
Wardrobe
A Wardrobe is a cabinet used for storing clothes.Wardrobe may also refer to:* Wardrobe , a full set of multiple clothing items* Wardrobe , part of royal administration in medieval England...
" during their work for Et Dieu… créa la femme.

Jürgens was married to: 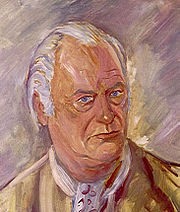