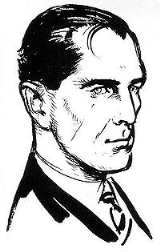 Overview
James Bond, code name 007, is a fictional character created in 1953 by writer Ian Fleming
Ian Fleming
Ian Lancaster Fleming was a British author, journalist and Naval Intelligence Officer.Fleming is best known for creating the fictional British spy James Bond and for a series of twelve novels and nine short stories about the character, one of the biggest-selling series of fictional books of...
, who featured him in twelve novels and two short story collections. There have been a six other authors who wrote authorised Bond novels or novelizations after Fleming's death in 1964: Kingsley Amis
Kingsley Amis
Sir Kingsley William Amis, CBE was an English novelist, poet, critic, and teacher. He wrote more than 20 novels, six volumes of poetry, a memoir, various short stories, radio and television scripts, along with works of social and literary criticism...
, Christopher Wood
Christopher Wood (writer)
Christopher Wood is an English screenwriter and novelist best known under the pseudonym 'Timothy Lea' for the Confessions series of novels and films. Under his own name, he adapted two James Bond novels for the screen: The Spy Who Loved Me and Moonraker .Wood has written many novels...
, John Gardner
John Gardner (thriller writer)
John Edmund Gardner was an English spy novelist, most notably for the James Bond series.-Early life:Gardner was born in Seaton Delaval, Northumberland. He graduated from St John's College, Cambridge and did postgraduate study at Oxford...
, Raymond Benson
Raymond Benson
Raymond Benson is an American author best known for being the official author of the adult James Bond novels from 1997 to 2003. Benson was born in Midland, Texas and graduated from Permian High School in Odessa in 1973...
, Sebastian Faulks
Sebastian Faulks
-Early life:Faulks was born on 20 April 1953 in Donnington, Berkshire to Peter Faulks and Pamela . Edward Faulks, Baron Faulks, is his older brother. He was educated at Elstree School, Reading and went on to Wellington College, Berkshire...
and Jeffery Deaver
Jeffery Deaver
Jeffery Deaver is an American mystery/crime writer. He has a bachelor of journalism degree from the University of Missouri and a law degree from Fordham University and originally started working as a journalist. He later practiced law before embarking on a successful career as a best-selling...
. Additionally, Charlie Higson
Charlie Higson
Charles Murray Higson , more commonly known as Charlie Higson - also Switch - is an English actor, comedian, author and former singer...
wrote a series on a young James Bond
Young Bond
Young Bond is a series of five young adult spy novels by Charlie Higson featuring Ian Fleming's secret agent James Bond as a young teenage boy attending school at Eton College in the 1930s...
and Kate Westbrook
Samantha Weinberg
Samantha Fletcher is a British Green politician, and under her maiden name of Samantha Weinberg, a novelist, journalist and travel writer. Educated at St Paul's Girls' School and Trinity College, Cambridge, she is the author of books such as A Fish Caught in Time: The Search for the Coelacanth and...
wrote three novels based on the diaries of a recurring series character, Moneypenny
The Moneypenny Diaries
The Moneypenny Diaries is a series of novels and short stories chronicling the life of Miss Moneypenny, M's personal secretary in Ian Fleming's James Bond series; it is considered an official spin-off of the Bond books...
.

The fictional British Secret Service
Secret Intelligence Service
The Secret Intelligence Service is responsible for supplying the British Government with foreign intelligence. Alongside the internal Security Service , the Government Communications Headquarters and the Defence Intelligence , it operates under the formal direction of the Joint Intelligence...
agent has also been adapted for television, radio, comic strip and video game formats as well as being used in the longest running and the second-highest grossing film franchise
Media franchise
A media franchise is an intellectual property involving the characters, setting and trademarks of an original work of media , such as a film, a work of literature, a television program or a video game. Generally, a whole series is made in a particular medium, along with merchandising and endorsements...
to date, which started in 1962 with Dr. No
Dr. No (film)
Dr. No is a 1962 spy film, starring Sean Connery; it is the first James Bond film. Based on the 1958 Ian Fleming novel of the same name, it was adapted by Richard Maibaum, Johanna Harwood, and Berkely Mather and was directed by Terence Young. The film was produced by Harry Saltzman and Albert R...
, starring Sean Connery
Sean Connery
Sir Thomas Sean Connery , better known as Sean Connery, is a Scottish actor and producer who has won an Academy Award, two BAFTA Awards and three Golden Globes Sir Thomas Sean Connery (born 25 August 1930), better known as Sean Connery, is a Scottish actor and producer who has won an Academy...
as Bond.

IS it true that James Bond was named after a person of the same name?

What are the static musical themes that remained in Bond films over the years?

How many actors has James Bond been played by?

What other characters were inspired by the James Bond model?

What are the various publications featuring James Bond?
More
x