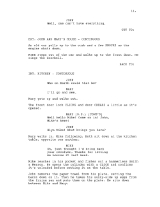 Overview
A screenplay or script is a written work that is made especially for a film
Film
A film, also called a movie or motion picture, is a series of still or moving images. It is produced by recording photographic images with cameras, or by creating images using animation techniques or visual effects...
or television program
Television program
A television program , also called television show, is a segment of content which is intended to be broadcast on television. It may be a one-time production or part of a periodically recurring series...
. Screenplays can be original works or adaptations from existing pieces of writing. In them, the movement, actions, expression, and dialogues of the characters are also narrated. A play for television is known as a teleplay
Teleplay
A teleplay is a television play, a comedy or drama written or adapted for television. The term surfaced during the 1950s with wide usage to distinguish a television plays from stage plays for the theater and screenplays written for films...
.
The format is structured in a way that one page usually equates to one minute of screen time.