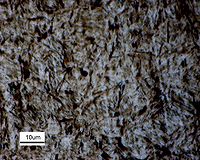 Martensite, named after the German metallurgist Adolf Martens
Adolf Martens
Adolf Martens , 6 March 1850 – 24 July 1914, was a German metallurgist and the namesake of the steel structure martensite.-References:*...
(1850–1914), most commonly refers to a very hard form of steel
Steel
Steel is an alloy that consists mostly of iron and has a carbon content between 0.2% and 2.1% by weight, depending on the grade. Carbon is the most common alloying material for iron, but various other alloying elements are used, such as manganese, chromium, vanadium, and tungsten...
crystalline structure, but it can also refer to any crystal structure that is formed by displacive transformation. It includes a class of hard mineral
Mineral
A mineral is a naturally occurring solid chemical substance formed through biogeochemical processes, having characteristic chemical composition, highly ordered atomic structure, and specific physical properties. By comparison, a rock is an aggregate of minerals and/or mineraloids and does not...
s occurring as lath- or plate-shaped crystal
Crystal
A crystal or crystalline solid is a solid material whose constituent atoms, molecules, or ions are arranged in an orderly repeating pattern extending in all three spatial dimensions. The scientific study of crystals and crystal formation is known as crystallography...
grains. When viewed in cross-section, the lenticular (lens-shaped) crystal grains appear acicular
Crystal habit
Crystal habit is an overall description of the visible external shape of a mineral. This description can apply to an individual crystal or an assembly of crystals or aggregates....
(needle-shaped), which is how they are sometimes incorrectly described.

In the 1890s, Martens studied samples of different steels under a microscope
Microscope
A microscope is an instrument used to see objects that are too small for the naked eye. The science of investigating small objects using such an instrument is called microscopy...
, and found that the hardest steels had a regular crystalline structure. He was the first to explain the cause of the widely differing mechanical properties of steels. Martensitic structures have since been found in many other practical materials, including shape memory alloy
Shape memory alloy
A shape-memory alloy is an alloy that "remembers" its original, cold-forged shape: returning the pre-deformed shape by heating. This material is a lightweight, solid-state alternative to conventional actuators such as hydraulic, pneumatic, and motor-based systems...
s and transformation-toughened ceramics.

The martensite is formed by rapid cooling (quench
Quench
In materials science, quenching is the rapid cooling of a workpiece to obtain certain material properties. It prevents low-temperature processes, such as phase transformations, from occurring by only providing a narrow window of time in which the reaction is both thermodynamically favorable and...
ing) of austenite
Austenite
Austenite, also known as gamma phase iron, is a metallic non-magnetic allotrope of iron or a solid solution of iron, with an alloying element. In plain-carbon steel, austenite exists above the critical eutectoid temperature of ; other alloys of steel have different eutectoid temperatures...
which traps carbon atoms that do not have time to diffuse out of the crystal structure. This martensitic reaction begins during cooling when the austenite reaches the martensite start temperature (Ms) and the parent austenite becomes mechanically unstable. At a constant temperature below Ms, a fraction of the parent austenite transforms rapidly, then no further transformation will occur. When the temperature is decreased, more of the austenite transforms to martensite. Finally, when the martensite finish temperature (Mf) is reached, the transformation is complete. Martensite can also be formed by application of stress (this property is frequently used in toughened ceramics like yttria-stabilized zirconia
Yttria-stabilized zirconia
Yttria-stabilized zirconia is a zirconium-oxide based ceramic, in which the particular crystal structure of zirconium oxide is made stable at room temperature by an addition of yttrium oxide...
and in special steels like TRIP steels (i.e. transformation induced plasticity steels)). Thus, Martensite can be thermally induced or stress induced.

One of the differences between the two phases is that martensite has a body-centered tetragonal (BCT) crystal structure, whereas austenite has a face-centered cubic
Cubic crystal system
In crystallography, the cubic crystal system is a crystal system where the unit cell is in the shape of a cube. This is one of the most common and simplest shapes found in crystals and minerals....
(FCC) structure. The transition between these two structures requires very little thermal activation energy because it is a martensitic transformation, which results in the subtle but rapid rearrangement of atomic positions, and has been known to occur even at cryogenic temperatures. Martensite has a lower density than austenite, so that the martensitic transformation results in a relative change of volume. Of considerably greater importance than the volume change is the shear strain which has a magnitude of about 0.26 and which determines the shape of the plates of martensite.

Martensite is not shown in the equilibrium phase diagram
Phase diagram
A phase diagram in physical chemistry, engineering, mineralogy, and materials science is a type of chart used to show conditions at which thermodynamically distinct phases can occur at equilibrium...
of the iron-carbon system because it is not an equilibrium phase. Equilibrium phases form by slow cooling rates allowing sufficient time for diffusion, whereas martensite is usually formed by fast cooling rates. Since chemical processes (the attainment of equilibrium) accelerate
Activation energy
In chemistry, activation energy is a term introduced in 1889 by the Swedish scientist Svante Arrhenius that is defined as the energy that must be overcome in order for a chemical reaction to occur. Activation energy may also be defined as the minimum energy required to start a chemical reaction...
at higher temperature, martensite is easily destroyed by the application of heat. This process is called tempering
Tempering
Tempering is a heat treatment technique for metals, alloys and glass. In steels, tempering is done to "toughen" the metal by transforming brittle martensite or bainite into a combination of ferrite and cementite or sometimes Tempered martensite...
. In some alloys, the effect is reduced by adding elements such as tungsten
Tungsten
Tungsten , also known as wolfram , is a chemical element with the chemical symbol W and atomic number 74.A hard, rare metal under standard conditions when uncombined, tungsten is found naturally on Earth only in chemical compounds. It was identified as a new element in 1781, and first isolated as...
that interfere with cementite
Cementite
Cementite, also known as iron carbide, is a chemical compound of iron and carbon, with the formula Fe3C . By weight, it is 6.67% carbon and 93.3% iron. It has an orthorhombic crystal structure. It is a hard, brittle material, normally classified as a ceramic in its pure form, though it is more...
nucleation, but, more often than not, the phenomenon is exploited instead. Since quenching can be difficult to control, many steels are quenched to produce an overabundance of martensite, then tempered to gradually reduce its concentration until the right structure for the intended application is achieved. Too much martensite leaves steel brittle, too little leaves it soft.