Cour d'Honneur is the architectural
Architecture
Architecture is both the process and product of planning, designing and construction. Architectural works, in the material form of buildings, are often perceived as cultural and political symbols and as works of art...
term for defining a three-sided courtyard
Courtyard
A court or courtyard is an enclosed area, often a space enclosed by a building that is open to the sky. These areas in inns and public buildings were often the primary meeting places for some purposes, leading to the other meanings of court....
, created when the main central block, or corps de logis
Corps de logis
Corps de logis is the architectural term which refers to the principal block of a large, usually classical, mansion or palace. It contains the principal rooms, state apartments and an entry. The grandest and finest rooms are often on the first floor above the ground level: this floor is the...
, is flanked by symmetrical advancing secondary wings, containing minor rooms. The Château of Versailles
Palace of Versailles
The Palace of Versailles , or simply Versailles, is a royal château in Versailles in the Île-de-France region of France. In French it is the Château de Versailles....
(illustration) and Blenheim Palace
Blenheim Palace
Blenheim Palace  is a monumental country house situated in Woodstock, Oxfordshire, England, residence of the dukes of Marlborough. It is the only non-royal non-episcopal country house in England to hold the title of palace. The palace, one of England's largest houses, was built between...
(plan) both feature such entrance courts.

Some 16th century symmetrical Western European country houses built on U-shaped groundplans resulted in a sheltered central door in a main range that was embraced between projecting wings, but the formalized cour d'honneur is first found in the great palace
Palace
A palace is a grand residence, especially a royal residence or the home of a head of state or some other high-ranking dignitary, such as a bishop or archbishop. The word itself is derived from the Latin name Palātium, for Palatine Hill, one of the seven hills in Rome. In many parts of Europe, the...
s and mansion
Mansion
A mansion is a very large dwelling house. U.S. real estate brokers define a mansion as a dwelling of over . A traditional European mansion was defined as a house which contained a ballroom and tens of bedrooms...
s of 17th century Europe, where it forms the principal approach and ceremonial entrance to the building. Its open courtyard is presented like the classical permanent theatre set of a proscenium stage, such as the built Roman set of opposed palazzi in a perspective street at Palladio
Andrea Palladio
Andrea Palladio was an architect active in the Republic of Venice. Palladio, influenced by Roman and Greek architecture, primarily by Vitruvius, is widely considered the most influential individual in the history of Western architecture...
's Teatro Olimpico (Vicenza, 1584). Like the theatre set the built environment is defined and enclosed from the more public space by ornate wrought iron
Wrought iron
thumb|The [[Eiffel tower]] is constructed from [[puddle iron]], a form of wrought ironWrought iron is an iron alloy with a very low carbon...
gilded railings. A later development replaced the railings with an open architectural columnar screen, as at Palais Royal
Palais Royal
The Palais-Royal, originally called the Palais-Cardinal, is a palace and an associated garden located in the 1st arrondissement of Paris...
(Paris), Schönbrunn Palace
Schönbrunn Palace
Schönbrunn Palace is a former imperial 1,441-room Rococo summer residence in Vienna, Austria. One of the most important cultural monuments in the country, since the 1960s it has been one of the major tourist attractions in Vienna...
(Vienna), Charlottenburg Palace
Charlottenburg Palace
Charlottenburg Palace is the largest palace in Berlin, Germany, and the only royal residency in the city dating back to the time of the Hohenzollern family. It is located in the Charlottenburg district of the Charlottenburg-Wilmersdorf burough.The palace was built at the end of the 17th century...
(Berlin), Alexander Palace
Alexander Palace
The Alexander Palace is a former imperial residence at Tsarskoye Selo, on a plateau around 30 minutes by train from St Petersburg. It is known as the favourite residence of the last Russian Emperor, Nicholas II, and his family and their initial place of imprisonment after the revolution that...
(Saint Petersburg), or Henry Holland
Henry Holland
Henry Holland may refer to:* Henry Holland, 3rd Duke of Exeter , Lancastrian leader during the Wars of the Roses* Henry Holland , English writer on witchcraft...
's Ionic screen
Ionic order
The Ionic order forms one of the three orders or organizational systems of classical architecture, the other two canonic orders being the Doric and the Corinthian...
formerly at Carlton House
Carlton House
Carlton House was a mansion in London, best known as the town residence of the Prince Regent for several decades from 1783. It faced the south side of Pall Mall, and its gardens abutted St. James's Park in the St James's district of London...
, London (illustrated below).

Technically the term cour d'honneur can be used of any large building whether public or residential, ancient or modern, which has a symmetrical courtyard set apart in this way, at which the honored visitor arrives. (The rest may arrive without flourish, through a side entrance.)

Examples of a cour d'honneur can be found in many of the most notable Baroque
Baroque
The Baroque is a period and the style that used exaggerated motion and clear, easily interpreted detail to produce drama, tension, exuberance, and grandeur in sculpture, painting, literature, dance, and music...
and classicizing buildings of Europe including the Palazzo Pitti
Palazzo Pitti
The Palazzo Pitti , in English sometimes called the Pitti Palace, is a vast mainly Renaissance palace in Florence, Italy. It is situated on the south side of the River Arno, a short distance from the Ponte Vecchio...
, one of the first 16th century residences to open a cour d'honneur—in the Pitti's case by embracing three sides of an existing public space. Other 16th century urban palazzi remained resolutely enclosed, like Palazzo Farnese, Rome. In Rome, the wings of Carlo Maderno
Carlo Maderno
Carlo Maderno was a Swiss-Italian architect, born in Ticino, who is remembered as one of the fathers of Baroque architecture. His façades of Santa Susanna, St. Peter's Basilica and Sant'Andrea della Valle were of key importance in the evolution of the Italian Baroque...
's Palazzo Barberini
Palazzo Barberini
Palazzo Barberini is a palace in Rome, facing the piazza of the same name in Rione Trevi and is home to the Galleria Nazionale d'Arte Antica.-History:...
design (1627), were the first that reached forward from a central block to create a cour d'honneur floorplan.

On a condensed, urban scale the formula is expressed in Parisian private houses, hôtels particuliers
Hôtel particulier
In French contexts an hôtel particulier is an urban "private house" of a grand sort. Whereas an ordinary maison was built as part of a row, sharing party walls with the houses on either side and directly fronting on a street, an hôtel particulier was often free-standing, and by the 18th century it...
built entre cour et jardin (ɑ̃ːtʁ kuːʁ e ʒaʁdɛ̃), between court and garden. In these plans, the street front may be expressed as a range of buildings not unlike the ordinary houses (maisons) that flank it, but with a grand, often arched, doorway, through which a carriage could pass into the cour d'honneur secreted behind. In a cramped site, one of the flanking walls of the cour d'honneur may be no more than an architectural screen, balancing the wing of the hôtel opposite it, which would often contain domestic offices and a stable. On a grander scale, the Palais Royal
Palais Royal
The Palais-Royal, originally called the Palais-Cardinal, is a palace and an associated garden located in the 1st arrondissement of Paris...
was laid out in just this manner, among the first Paris hôtels particuliers to have a cour d'honneur, which once was separated from the public street by a wrought iron grille, later by an open architectural screen, with its grand open jardin behind, now a public space. Nearby, the Tuileries Palace
Tuileries Palace
The Tuileries Palace was a royal palace in Paris which stood on the right bank of the River Seine until 1871, when it was destroyed in the upheaval during the suppression of the Paris Commune...
is gone: but the cour d'honneur with its Arc du Carrousel remains, as do the Tuileries Gardens behind the former palace's site. 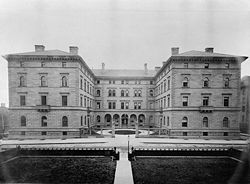 In densely-built cities disposed on a rigorously democratic grid plan like New York
New York City
New York is the most populous city in the United States and the center of the New York Metropolitan Area, one of the most populous metropolitan areas in the world. New York exerts a significant impact upon global commerce, finance, media, art, fashion, research, technology, education, and...
, private houses with a cour d'honneur were rare, even in the Gilded Age
Gilded Age
In United States history, the Gilded Age refers to the era of rapid economic and population growth in the United States during the post–Civil War and post-Reconstruction eras of the late 19th century. The term "Gilded Age" was coined by Mark Twain and Charles Dudley Warner in their book The Gilded...
: the Villard Houses
Henry Villard
Henry Villard was an American journalist and financier who was an early president of the Northern Pacific Railway....
on Madison Avenue, (illustration, left) and the former William K. Vanderbilt House
William Kissam Vanderbilt
William Kissam Vanderbilt was a member of the prominent American Vanderbilt family. He managed railroads and was a horse breeder.-Biography:...
on the Plaza were the rare exceptions. In London, Burlington House
Burlington House
Burlington House is a building on Piccadilly in London. It was originally a private Palladian mansion, and was expanded in the mid 19th century after being purchased by the British government...
retains its cour d'honneur and so of course does Buckingham Palace
Buckingham Palace
Buckingham Palace, in London, is the principal residence and office of the British monarch. Located in the City of Westminster, the palace is a setting for state occasions and royal hospitality...
, but here the cour d'honneur is now hidden behind Edward Blore
Edward Blore
Edward Blore was a 19th century British landscape and architectural artist, architect and antiquary. He was born in Edinburgh, Scotland ....
's much photographed east façade, of 1847, which faces the Mall and now encloses it, however the cour d'honneur, now known as "The Quadrangle", still retains the principal entrance to the palace.
The source of this article is wikipedia, the free encyclopedia.  The text of this article is licensed under the GFDL.