Encyclopedia
Burlington House is a building on Piccadilly
Piccadilly
Piccadilly is a major street in central London, running from Hyde Park Corner in the west to Piccadilly Circus in the east. It is completely within the city of Westminster. The street is part of the A4 road, London's second most important western artery. St...
in London. It was originally a private Palladian
Palladian architecture
Palladian architecture is a European style of architecture derived from the designs of the Venetian architect Andrea Palladio . The term "Palladian" normally refers to buildings in a style inspired by Palladio's own work; that which is recognised as Palladian architecture today is an evolution of...
mansion, and was expanded in the mid 19th century after being purchased by the British government. The main building is at the northern end of the courtyard and houses the Royal Academy
Royal Academy
The Royal Academy of Arts is an art institution based in Burlington House on Piccadilly, London. The Royal Academy of Arts has a unique position in being an independent, privately funded institution led by eminent artists and architects whose purpose is to promote the creation, enjoyment and...
, while five learned societies occupy the two wings on the east and west sides of the courtyard and the Piccadilly wing at the southern end. These societies, collectively known as the Courtyard Societies are:


Burlington House is most familiar to the general public as the venue for the Royal Academy's temporary art exhibitions. 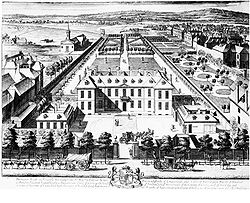 The house was one of the earliest of a number of very large private residences built on the north side of Piccadilly
Piccadilly
Piccadilly is a major street in central London, running from Hyde Park Corner in the west to Piccadilly Circus in the east. It is completely within the city of Westminster. The street is part of the A4 road, London's second most important western artery. St...
, previously a country lane, from the 1660s onwards. The first version was begun by Sir John Denham
John Denham (poet)
Sir John Denham was an English poet and courtier. He served as Surveyor of the King's Works and is buried in Westminster Abbey....
in or just after 1665. It was a red-brick double-pile hip-roofed mansion with a recessed centre, typical of the style of the time, or perhaps even a little old fashioned. Denham may have acted as his own architect, or he may have employed Hugh May
Hugh May
Hugh May was an English architect in the period after the Restoration of King Charles II. He worked in the era which fell between the first introduction of Palladianism into England by Inigo Jones, and the full flowering of English Baroque under John Vanbrugh and Nicholas Hawksmoor. His own work...
, who certainly became involved in the construction after the house was sold in an incomplete state in 1667 to Richard Boyle, 1st Earl of Burlington
Richard Boyle, 1st Earl of Burlington
Richard Boyle, 1st Earl of Burlington, 2nd Earl of Cork was Lord High Treasurer of Ireland and a cavalier.-Early years:...
, from whom it derives its name. http://www.british-history.ac.uk/report.asp?compid=41482 Burlington had the house completed.

In 1704 the house passed to the ten-year-old Richard Boyle, 3rd Earl of Burlington
Richard Boyle, 3rd Earl of Burlington
Richard Boyle, 3rd Earl of Burlington and 4th Earl of Cork PC , born in Yorkshire, England, was the son of Charles Boyle, 2nd Earl of Burlington and 3rd Earl of Cork...
, who was to become the principal patron of the Palladian movement in England, and an architect in his own right. During Burlington's minority James Gibbs
James Gibbs
James Gibbs was one of Britain's most influential architects. Born in Scotland, he trained as an architect in Rome, and practised mainly in England...
made exterior alterations to the house, including a quadrant Doric colonnade which was later praised by Sir William Chambers
William Chambers (architect)
Sir William Chambers was a Scottish architect, born in Gothenburg, Sweden, where his father was a merchant. Between 1740 and 1749 he was employed by the Swedish East India Company making several voyages to China where he studied Chinese architecture and decoration.Returning to Europe, he studied...
as, "One of the finest pieces of architecture". 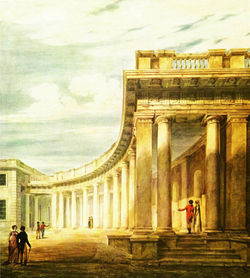 Burlington's taste was transformed by the publication of Giacomo Leoni
Giacomo Leoni
Giacomo Leoni , also known as James Leoni, was an Italian architect, born in Venice. He was a devotee of the work of Florentine Renaissance architect Leon Battista Alberti, who had also been an inspiration for Andrea Palladio. Leoni thus served as a prominent exponent of Palladianism in English...
's Palladio. In 1717 or 1718, Colen Campbell
Colen Campbell
Colen Campbell was a pioneering Scottish architect who spent most of his career in England, and is credited as a founder of the Georgian style...
was appointed to replace Gibbs, who was working in the Baroque style of Sir Christopher Wren, to recast the work in a new manner, on the old foundations. This was a key moment in the history of English architecture, as Campbell's work was in a strict Palladian style, and the aesthetic preferences of Campbell and Burlington soon joined by their close associate William Kent
William Kent
William Kent , born in Bridlington, Yorkshire, was an eminent English architect, landscape architect and furniture designer of the early 18th century.He was baptised as William Cant.-Education:...
, who worked on interiors at Burlington House, were to provide the leading strand in English architecture and interior decoration for two generations. Campbell's work closely followed the form of the previous building and reused much of the structure, but the conventional front (south) facade was replaced with an austere two-storey composition, taking Palladio's Palazzo Iseppo di Porti
Palazzo Porto
Palazzo Porto is a palazzo built by Andrea Palladio in Contrà Porti, Vicenza, Italy. It is one of two palaces in the city designed by Palladio for members of the Porto family...
, Vicenza, for a model, but omitting sculpture and substituting a balustrade for the attic storey. The ground floor became a rusticated basement, which supported a monumental piano nobile
Piano nobile
The piano nobile is the principal floor of a large house, usually built in one of the styles of classical renaissance architecture...
of nine bays. This had no centrepiece, but was highlighted by venetian windows in the projecting end bays, the first to be seen in England. Other alterations included a monumental gateway to Piccadilly and the reconstruction of most of the principal interiors, with typical Palladian features such as rich coved ceilings. 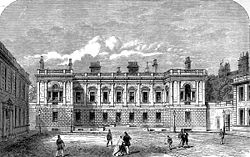 On Lord Burlington's death in 1753, Burlington House passed to the Dukes of Devonshire
Duke of Devonshire
Duke of Devonshire is a title in the peerage of England held by members of the Cavendish family. This branch of the Cavendish family has been one of the richest and most influential aristocratic families in England since the 16th century, and have been rivalled in political influence perhaps only...
, but they had no need of it as they already owned Devonshire House
Devonshire House
Devonshire House in Piccadilly was the London residence of the Dukes of Devonshire in the 18th and 19th centuries. It was built for William Cavendish, 3rd Duke of Devonshire in the Palladian style, to designs by William Kent...
just along Piccadilly. The 4th Duke's younger son Lord George Cavendish and a Devonshire in-law, the 3rd Duke of Portland, each used the house for at least two separate spells. Portland had some of the interiors altered by John Carr in the 1770s. Eventually Lord George, who was a rich man in his own right due to a marriage to an heiress, purchased the house from the 6th Duke of Devonshire for £70,000 in 1815. He had some alterations made by Samuel Ware, which like Carr's work were sympathetic with the Palladian style of the house. In 1819 the Burlington Arcade
Burlington Arcade
The Burlington Arcade is a covered shopping arcade in London that runs behind Bond Street from Piccadilly through to Burlington Gardens. It is one of the precursors of the mid-19th century European shopping gallery and the modern shopping centre...
was built along the western part of the grounds.

In 1854, Burlington House was sold to the British government for £140,000, originally with the plan of demolishing the building and using the site for the University of London
University of London
-20th century:Shortly after 6 Burlington Gardens was vacated, the University went through a period of rapid expansion. Bedford College, Royal Holloway and the London School of Economics all joined in 1900, Regent's Park College, which had affiliated in 1841 became an official divinity school of the...
. This plan, however, was abandoned in the face of strong opposition and in 1857 Burlington House was occupied by the Royal Society
Royal Society
The Royal Society of London for Improving Natural Knowledge, known simply as the Royal Society, is a learned society for science, and is possibly the oldest such society in existence. Founded in November 1660, it was granted a Royal Charter by King Charles II as the "Royal Society of London"...
, the Linnean Society and the Chemical Society (later the Royal Society of Chemistry). 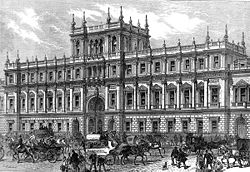 The Royal Academy
Royal Academy
The Royal Academy of Arts is an art institution based in Burlington House on Piccadilly, London. The Royal Academy of Arts has a unique position in being an independent, privately funded institution led by eminent artists and architects whose purpose is to promote the creation, enjoyment and...
took over the main block in 1867 on a 999 year lease with rent of £1 per year. The former east and west service wings on either side of the courtyard, and the wall and gate to Piccadilly, were replaced by much more voluminous wings in an approximation of Campbell's style. These were completed in 1873 and the three societies moved into these. In 1874 they were joined by the Geological Society, the Royal Astronomical Society and the Society of Antiquaries.

In 2004 the Courtyard Societies went to court against the Office of the Deputy Prime Minister over the terms of their tenure of the apartments in Burlington House, which they have enjoyed rent-free. The dispute was sent to mediation, after which the following statement was released: "The Office of the Deputy Prime Minister and the Learned Societies had a very constructive meeting on 16 March which envisages the continued presence of the Learned Societies at Burlington House. Discussions are continuing with a view to formalising the arrangement on a basis which is acceptable to all parties." 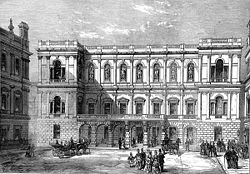 The courtyard of Burlington House is open to the public during the day. The Royal Academy's public art exhibitions are staged in nineteenth-century additions to the main block which are of little architectural interest. However in 2004 the principal reception rooms on the piano nobile were opened to the public after restoration as the "John Madejski Fine Rooms". They contain many of the principal works in the academy's permanent collection, which predominantly features works by Royal Academicians, and small temporary exhibitions drawn from the collection. The east, west and Piccadilly wings are private.