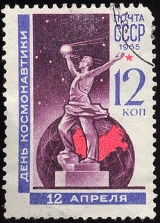 Encyclopedia
Cosmonautics Day is a holiday celebrated in Russia
Russia
Russia or , officially known as both Russia and the Russian Federation , is a country in northern Eurasia. It is a federal semi-presidential republic, comprising 83 federal subjects...
and some other former USSR countries on April 12. This holiday celebrates the first manned space flight made on April 12, 1961 by the 27-year old Soviet cosmonaut Yuri Gagarin
Yuri Gagarin
Yuri Alekseyevich Gagarin was a Soviet pilot and cosmonaut. He was the first human to journey into outer space, when his Vostok spacecraft completed an orbit of the Earth on April 12, 1961....
. Gagarin circled the Earth
Earth
Earth is the third planet from the Sun, and the densest and fifth-largest of the eight planets in the Solar System. It is also the largest of the Solar System's four terrestrial planets...
for 1 hour and 48 minutes aboard the Vostok 1
Vostok 1
Vostok 1 was the first spaceflight in the Vostok program and the first human spaceflight in history. The Vostok 3KA spacecraft was launched on April 12, 1961. The flight took Yuri Gagarin, a cosmonaut from the Soviet Union, into space. The flight marked the first time that a human entered outer...
spacecraft. Coincidentally, it is also the anniversary of the first Space Shuttle
Space Shuttle
The Space Shuttle was a manned orbital rocket and spacecraft system operated by NASA on 135 missions from 1981 to 2011. The system combined rocket launch, orbital spacecraft, and re-entry spaceplane with modular add-ons...
launch that occured 20 years after the historic Vostok flight.

The holiday was established in the Soviet Union
Soviet Union
The Soviet Union , officially the Union of Soviet Socialist Republics , was a constitutionally socialist state that existed in Eurasia between 1922 and 1991....
one year later, on April 9, 1962. In modern Russia, it is celebrated in accordance with Article 1.1 of the Law "On the Days of Military Glory and the Commemorative Dates in Russia".

Gagarin's flight was an instant and surprising success for the Soviet space program
Soviet space program
The Soviet space program is the rocketry and space exploration programs conducted by the former Union of Soviet Socialist Republics from the 1930s until its dissolution in 1991...
. Gagarin became a national hero of the Soviet Union and eastern block and a famous figure around the world. Major newspapers around the globe published his biography and details of his flight. Moscow and other cities in the USSR held parades, the scale of which were second only to WWII Victory Parades. Gagarin was escorted in a long motorcade of high-ranking officials through the streets of Moscow
Moscow
Moscow is the capital, the most populous city, and the most populous federal subject of Russia. The city is a major political, economic, cultural, scientific, religious, financial, educational, and transportation centre of Russia and the continent...
to the Kremlin
Kremlin
A kremlin , same root as in kremen is a major fortified central complex found in historic Russian cities. This word is often used to refer to the best-known one, the Moscow Kremlin, or metonymically to the government that is based there...
where, in a lavish ceremony, he was awarded the highest Soviet honour, the title of Hero of the Soviet Union
Hero of the Soviet Union
The title Hero of the Soviet Union was the highest distinction in the Soviet Union, awarded personally or collectively for heroic feats in service to the Soviet state and society.-Overview:...
, by the Soviet leader Nikita Khrushchev
Nikita Khrushchev
Nikita Sergeyevich Khrushchev led the Soviet Union during part of the Cold War. He served as First Secretary of the Communist Party of the Soviet Union from 1953 to 1964, and as Chairman of the Council of Ministers, or Premier, from 1958 to 1964...
.

Until today the commemoration ceremony on Cosmonautics Day starts in the city of Korolyov
Korolyov (city)
Korolyov or Korolev is an industrial city in Moscow Oblast, Russia, well known as the cradle of Soviet and Russian space exploration. It was originally founded as Kaliningrad in 1938 by Vasily Boldyrev, Naum Nosovsky, and Mikhail Loginov as the leading Soviet center for production of anti-tank...
, near Gagarin's statue. Participants then proceed under police escort to Red Square
Red Square
Red Square is a city square in Moscow, Russia. The square separates the Kremlin, the former royal citadel and currently the official residence of the President of Russia, from a historic merchant quarter known as Kitai-gorod...
for a visit to Gagarin's grave in the Kremlin Wall Necropolis
Kremlin Wall Necropolis
Burials in the Kremlin Wall Necropolis in Moscow began in November 1917, when 240 pro-Bolshevik victims of the October Revolution were buried in mass graves on Red Square. It is centered on both sides of Lenin's Mausoleum, initially built in wood in 1924 and rebuilt in granite in 1929–1930...
, and continue to Cosmonauts Alley
Cosmonauts Alley
Cosmonauts Alley is a wide avenue in northern Moscow leading to the Russian Museum of Cosmonautics and the Monument to the Conquerors of Space . The pedestrian-only avenue connects the museum and monument to the VDNKh subway station....
, near the Monument to the Conquerors of Space
Monument to the Conquerors of Space
The Monument to the Conquerors of Space was erected in Moscow in 1964 to celebrate achievements of the Soviet people in space exploration. It depicts a starting rocket that rises on its contrail. The monument is 110 m tall, has 77° incline, and is made of titanium...
. Finally, the festivities are concluded with a visit to the Novodevichy Cemetery
Novodevichy Cemetery
Novodevichy Cemetery is the most famous cemetery in Moscow, Russia. It is next to the 16th-century Novodevichy Convent, which is the city's third most popular tourist site. It should not be confused with the Novodevichy Cemetery in Saint Petersburg....
.