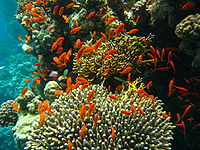 Coral bleaching is the loss of intracellular endosymbionts (zooxanthellae) through either expulsion or loss of algal pigmentation.The corals that form the structure of the great reef
Coral reef
Coral reefs are underwater structures made from calcium carbonate secreted by corals. Coral reefs are colonies of tiny living animals found in marine waters that contain few nutrients. Most coral reefs are built from stony corals, which in turn consist of polyps that cluster in groups. The polyps...
ecosystem
Ecosystem
An ecosystem is a biological environment consisting of all the organisms living in a particular area, as well as all the nonliving , physical components of the environment with which the organisms interact, such as air, soil, water and sunlight....
s of tropical seas depend upon a symbiotic relationship with unicellular flagellate
Flagellate
Flagellates are organisms with one or more whip-like organelles called flagella. Some cells in animals may be flagellate, for instance the spermatozoa of most phyla. Flowering plants do not produce flagellate cells, but ferns, mosses, green algae, some gymnosperms and other closely related plants...
protozoa, called zooxanthellae, that are photosynthetic
Photosynthesis
Photosynthesis is a chemical process that converts carbon dioxide into organic compounds, especially sugars, using the energy from sunlight. Photosynthesis occurs in plants, algae, and many species of bacteria, but not in archaea. Photosynthetic organisms are called photoautotrophs, since they can...
and live within their tissues. Zooxanthellae give coral its coloration, with the specific color depending on the particular clade
Clade
A clade is a group consisting of a species and all its descendants. In the terms of biological systematics, a clade is a single "branch" on the "tree of life". The idea that such a "natural group" of organisms should be grouped together and given a taxonomic name is central to biological...
. Under stress, corals may expel their zooxanthellae, which leads to a lighter or completely white appearance, hence the term "bleached".

Bleaching occurs when the conditions necessary to sustain the coral's zooxanthellae cannot be maintained. Any environmental trigger that affects the coral's ability to supply the zooxanthellae with nutrients for photosynthesis (carbon dioxide
Carbon dioxide
Carbon dioxide is a naturally occurring chemical compound composed of two oxygen atoms covalently bonded to a single carbon atom...
, ammonium
Ammonium
The ammonium cation is a positively charged polyatomic cation with the chemical formula NH. It is formed by the protonation of ammonia...
) will lead to expulsion. This process is a "downward spiral", whereby the coral's failure to prevent the division of zooxanthellae leads to ever-greater amounts of the photosynthesis-derived carbon to be diverted into the algae rather than the coral. This makes the energy balance required for the coral to continue sustaining its algae more fragile, and hence the coral loses the ability to maintain its parasitic control on its zooxanthellae.

Coral bleaching is a generalized stress response of corals and can be caused by a number of biotic and abiotic factors, including:

While most of these triggers may result in localized bleaching events (tens to hundreds of kilometers), mass coral bleaching events occur at a regional or global scale and are triggered by periods of elevated thermal stress resulting from increased sea surface temperatures.

Most evidence indicates that elevated temperature is the cause of mass bleaching events. Six major episodes of coral bleaching have occurred
since 1979, with the associated coral mortality affecting reefs in every part of the world. Correlative field studies have pointed to warmer-than normal conditions as being responsible for triggering mass bleaching events. These studies show a tight association between warmer-than-normal conditions (at least 1°C higher than the summer maximum) and the incidence of coral bleaching.

Factors that influence the outcome of a bleaching event include stress-resistance which reduces bleaching, tolerance to the absence of zooxanthellae, and how quickly new coral grows to replace the dead. Due to the patchy nature of bleaching, local climatic conditions such as shade or a stream of cooler water can reduce bleaching incidence. Coral and zooxanthellae health and genetics also influence bleaching.

Large coral colonies such as Porites
Porites
Porites is a genus of scleractinian coral which is characterised by a finger-like morphology. Members of this genus have widely spaced calices, a well-developed wall reticulum and are bilaterally symmetrical...
are able to withstand extreme temperature shocks, while fragile branching corals such as table coral are far more susceptible to stress following a temperature change. Corals consistently exposed to low stress levels may be more resistant to bleaching.

Increasing ocean acidification
Ocean acidification
Ocean acidification is the name given to the ongoing decrease in the pH and increase in acidity of the Earth's oceans, caused by the uptake of anthropogenic carbon dioxide from the atmosphere....
due to rises in carbon dioxide levels exacerbates the bleaching effects of thermal stress. Acidification affects the corals' ability to create calcareous skeletons, essential to their survival. A recent study from the Atkinson Center for a Sustainable Future
Atkinson Center for a Sustainable Future
The David R. Atkinson Center for a Sustainable Future is a research organization created in Fall 2007 at Cornell University. ACSF advances multidisciplinary research in Energy, the Environment and Economic Development, and cultivates collaborations within and beyond Cornell.- History :ACSF,...
found that with the combination of acidification and temperature rises, the levels of CO2 could become too high for coral to survive in as little as 50 years.

Infectious bacteria
Bacteria
Bacteria are a large domain of prokaryotic microorganisms. Typically a few micrometres in length, bacteria have a wide range of shapes, ranging from spheres to rods and spirals...
of the species Vibrio
Vibrio
Vibrio is a genus of Gram-negative bacteria possessing a curved rod shape, several species of which can cause foodborne infection, usually associated with eating undercooked seafood. Typically found in saltwater, Vibrio are facultative anaerobes that test positive for oxidase and do not form...
shiloi are the bleaching agent of Oculina patagonica in the Mediterranean Sea
Mediterranean Sea
The Mediterranean Sea is a sea connected to the Atlantic Ocean surrounded by the Mediterranean region and almost completely enclosed by land: on the north by Anatolia and Europe, on the south by North Africa, and on the east by the Levant...
, causing this effect by attacking the zooxanthellae. V. shiloi is infectious only during warm periods. Elevated temperature increases the virulence of V. shiloi, which then become able to adhere to a beta-galactoside
Beta-galactoside
A β-galactoside is a type of galactoside in which the glycosidic bond lies above the plane of the galactose residue. The most commonly recognized and used β-galactoside in biochemistry is Lactose. However, other chemicals, such as ONPG, are known, but these are typically synthesized for...
-containing receptor in the surface mucus of the host coral. V. shiloi then penetrates the coral's epidermis
Epidermis (zoology)
The Epidermis is an epithelium that covers the body of an eumetazoan . Eumetazoa have a cavity lined with a similar epithelium, the gastrodermis, which forms a boundary with the epidermis at the mouth.Sponges have no epithelium, and therefore no epidermis or gastrodermis...
, multiplies, and produces both heat-stable and heat-sensitive toxin
Toxin
A toxin is a poisonous substance produced within living cells or organisms; man-made substances created by artificial processes are thus excluded...
s, which affect zooxanthellae by inhibiting photosynthesis and causing lysis
Lysis
Lysis refers to the breaking down of a cell, often by viral, enzymic, or osmotic mechanisms that compromise its integrity. A fluid containing the contents of lysed cells is called a "lysate"....
.

During the summer of 2003, coral reefs in the Mediterranean Sea appeared to gain resistance to the pathogen, and further infection was not observed. The main hypothesis for the emerged resistance is the presence of symbiotic communities of protective bacteria living in the corals. The bacterial species capable of lysing V. shiloi had not been identified as of 2011. 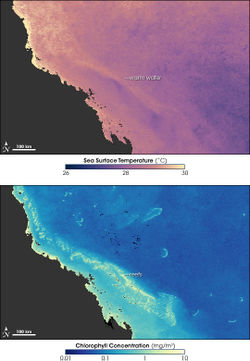 The Great Barrier Reef
Great Barrier Reef
The Great Barrier Reef is the world'slargest reef system composed of over 2,900 individual reefs and 900 islands stretching for over 2,600 kilometres over an area of approximately...
along the coast of Australia
Australia
Australia , officially the Commonwealth of Australia, is a country in the Southern Hemisphere comprising the mainland of the Australian continent, the island of Tasmania, and numerous smaller islands in the Indian and Pacific Oceans. It is the world's sixth-largest country by total area...
experienced bleaching events in 1980, 1982, 1992, 1994, 1998, 2002, and 2006. While most areas recovered with relatively low levels of coral death, some locations suffered severe damage, with up to 90% mortality. The most widespread and intense events occurred in the summers of 1998 and 2002, with 42% and 54% respectivly of reefs bleached to some extent, and 18% strongly bleached.

Other coral reef provinces have been permanently damaged by warm sea temperatures, most severely in the Indian Ocean
Indian Ocean
The Indian Ocean is the third largest of the world's oceanic divisions, covering approximately 20% of the water on the Earth's surface. It is bounded on the north by the Indian Subcontinent and Arabian Peninsula ; on the west by eastern Africa; on the east by Indochina, the Sunda Islands, and...
. Up to 90% of coral cover has been lost in the Maldives
Maldives
The Maldives , , officially Republic of Maldives , also referred to as the Maldive Islands, is an island nation in the Indian Ocean formed by a double chain of twenty-six atolls oriented north-south off India's Lakshadweep islands, between Minicoy Island and...
, Sri Lanka
Sri Lanka
Sri Lanka, officially the Democratic Socialist Republic of Sri Lanka is a country off the southern coast of the Indian subcontinent. Known until 1972 as Ceylon , Sri Lanka is an island surrounded by the Indian Ocean, the Gulf of Mannar and the Palk Strait, and lies in the vicinity of India and the...
, Kenya
Kenya
Kenya , officially known as the Republic of Kenya, is a country in East Africa that lies on the equator, with the Indian Ocean to its south-east...
and Tanzania
Tanzania
The United Republic of Tanzania is a country in East Africa bordered by Kenya and Uganda to the north, Rwanda, Burundi, and the Democratic Republic of the Congo to the west, and Zambia, Malawi, and Mozambique to the south. The country's eastern borders lie on the Indian Ocean.Tanzania is a state...
and in the Seychelles
Seychelles
Seychelles , officially the Republic of Seychelles , is an island country spanning an archipelago of 115 islands in the Indian Ocean, some east of mainland Africa, northeast of the island of Madagascar....
.

Evidence from extensive research in the 1970s of thermal tolerance in Hawaii
Hawaii
Hawaii is the newest of the 50 U.S. states , and is the only U.S. state made up entirely of islands. It is the northernmost island group in Polynesia, occupying most of an archipelago in the central Pacific Ocean, southwest of the continental United States, southeast of Japan, and northeast of...
an corals and of oceanic warming led researchers in 1990 to predict mass occurrences of coral bleaching throughout Hawaii. Major bleaching occurred in 1996 and in 2002.

Coral in the south Red Sea does not bleach despite summer water temperatures up to 34°C.

Significant bleaching occurred in the Mediterranean Sea in 1996.