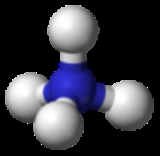 Overview
The ammonium cation is a positively charged
Electric charge
Electric charge is a physical property of matter that causes it to experience a force when near other electrically charged matter. Electric charge comes in two types, called positive and negative. Two positively charged substances, or objects, experience a mutual repulsive force, as do two...
polyatomic cation
Polyatomic ion
A polyatomic ion, also known as a molecular ion, is a charged species composed of two or more atoms covalently bonded or of a metal complex that can be considered as acting as a single unit in the context of acid and base chemistry or in the formation of salts. The prefix "poly-" means "many," in...
with the chemical formula
Chemical formula
A chemical formula or molecular formula is a way of expressing information about the atoms that constitute a particular chemical compound....
NH. It is formed by the protonation
Protonation
In chemistry, protonation is the addition of a proton to an atom, molecule, or ion. Some classic examples include*the protonation of water by sulfuric acid:*the protonation of isobutene in the formation of a carbocation:2C=CH2 + HBF4 → 3C+ + BF4−*the protonation of ammonia in the...
of ammonia
Ammonia
Ammonia is a compound of nitrogen and hydrogen with the formula . It is a colourless gas with a characteristic pungent odour. Ammonia contributes significantly to the nutritional needs of terrestrial organisms by serving as a precursor to food and fertilizers. Ammonia, either directly or...
(NH3). Ammonium is also a general name for positively charged or protonated substituted
Substitution
Substitution may refer to:- Sciences :* Substitution , a syntactic transformation on strings of symbols of a formal language* Substitution of variables* Substitution cipher, a method of encryption...
amine
Amine
Amines are organic compounds and functional groups that contain a basic nitrogen atom with a lone pair. Amines are derivatives of ammonia, wherein one or more hydrogen atoms have been replaced by a substituent such as an alkyl or aryl group. Important amines include amino acids, biogenic amines,...
s and quaternary ammonium cation
Quaternary ammonium cation
Quaternary ammonium cations, also known as quats, are positively charged polyatomic ions of the structure NR4+, R being an alkyl group or an aryl group. Unlike the ammonium ion and the primary, secondary, or tertiary ammonium cations, the quaternary ammonium cations are permanently charged,...
s (N+R4), where one or more hydrogen
Hydrogen
Hydrogen is the chemical element with atomic number 1. It is represented by the symbol H. With an average atomic weight of , hydrogen is the lightest and most abundant chemical element, constituting roughly 75% of the Universe's chemical elemental mass. Stars in the main sequence are mainly...
atoms are replaced by organic radical groups (indicated by R).

In the substitutive nomenclature NH4+ is denoted by the name azanium instead of ammonium.
The ammonium ion is mildly acidic, reacting with Brønsted bases to return to the uncharged ammonia molecule:


Thus, treatment of concentrated solutions of ammonium salts with strong base gives ammonia.

What is the melting and boiling point of Ammonium?

How is it posible to bring ammonium (NH4NO3 back to its original state as ammonia?
More
x