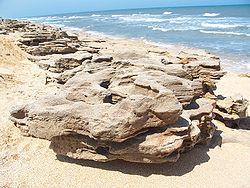 Coquina is a sedimentary rock
Sedimentary rock
Sedimentary rock are types of rock that are formed by the deposition of material at the Earth's surface and within bodies of water. Sedimentation is the collective name for processes that cause mineral and/or organic particles to settle and accumulate or minerals to precipitate from a solution....
that is composed either wholly or almost entirely of the transported, abraded, and mechanically sorted fragments of the shells
Seashell
A seashell or sea shell, also known simply as a shell, is a hard, protective outer layer created by an animal that lives in the sea. The shell is part of the body of the animal. Empty seashells are often found washed up on beaches by beachcombers...
of either molluscs
Mollusca
The Mollusca , common name molluscs or mollusksSpelled mollusks in the USA, see reasons given in Rosenberg's ; for the spelling mollusc see the reasons given by , is a large phylum of invertebrate animals. There are around 85,000 recognized extant species of molluscs. Mollusca is the largest...
, trilobite
Trilobite
Trilobites are a well-known fossil group of extinct marine arthropods that form the class Trilobita. The first appearance of trilobites in the fossil record defines the base of the Atdabanian stage of the Early Cambrian period , and they flourished throughout the lower Paleozoic era before...
s, brachiopod
Brachiopod
Brachiopods are a phylum of marine animals that have hard "valves" on the upper and lower surfaces, unlike the left and right arrangement in bivalve molluscs. Brachiopod valves are hinged at the rear end, while the front can be opened for feeding or closed for protection...
s, or other invertebrate
Invertebrate
An invertebrate is an animal without a backbone. The group includes 97% of all animal species – all animals except those in the chordate subphylum Vertebrata .Invertebrates form a paraphyletic group...
s. For a sediment to be considered to be a coquina, the average size of the particles composing it should be 2 mm or greater in size. Coquina can vary in hardness from poorly to moderately-cemented. The term "coquina" is derived from the Spanish word for cockleshells or shellfish. Incompletely consolidated and poorly cemented coquinas are considered grainstone
Grainstone
Under the Dunham classification, grainstones are grain-supported carbonate sedimentary rocks that contain no micrite. The spaces between grains are filled with sparry cement.-References:...
s in the Dunham classification
Dunham classification
The Dunham classification system for carbonate sedimentary rocks was devised by Robert J. Dunham in 1964, and refined by Embry and Klovan in 1971 to include sediments that were organically bound during deposition.-History:...
system for carbonate sedimentary rocks. Well-cemented coquinas are classified as biosparites according to the Folk classification of sedimentary rocks
Folk classification
The Folk classification is a technical descriptive classification of sedimentary rocks devised by Robert L. Folk, an influential sedimentary petrologist and Professor Emeritus at the University of Texas.-Folk's sandstone classification:...
.

Coquinas accumulate in high-energy marine and lacustrine environments where currents and waves result in the vigorous winnowing, abrasion, fracturing, and sorting of the shells, which compose them. As a result, they typically exhibit well-developed bedding or cross-bedding, close packing, and good orientation of the shell fragments composing them. The high-energy marine or lacustrine associated with coquinas include beaches, shallow submarine raised banks, swift tidal channels, and barrier bars.

Coquina is mainly composed of mineral
Mineral
A mineral is a naturally occurring solid chemical substance formed through biogeochemical processes, having characteristic chemical composition, highly ordered atomic structure, and specific physical properties. By comparison, a rock is an aggregate of minerals and/or mineraloids and does not...
calcite
Calcite
Calcite is a carbonate mineral and the most stable polymorph of calcium carbonate . The other polymorphs are the minerals aragonite and vaterite. Aragonite will change to calcite at 380-470°C, and vaterite is even less stable.-Properties:...
, often including some phosphate
Phosphate
A phosphate, an inorganic chemical, is a salt of phosphoric acid. In organic chemistry, a phosphate, or organophosphate, is an ester of phosphoric acid. Organic phosphates are important in biochemistry and biogeochemistry or ecology. Inorganic phosphates are mined to obtain phosphorus for use in...
, in the form of seashell
Seashell
A seashell or sea shell, also known simply as a shell, is a hard, protective outer layer created by an animal that lives in the sea. The shell is part of the body of the animal. Empty seashells are often found washed up on beaches by beachcombers...
s or coral
Coral
Corals are marine animals in class Anthozoa of phylum Cnidaria typically living in compact colonies of many identical individual "polyps". The group includes the important reef builders that inhabit tropical oceans and secrete calcium carbonate to form a hard skeleton.A coral "head" is a colony of...
. It is found in surface exposures along the east coast of Florida from St. Johns County
St. Johns County, Florida
St. Johns County is a county located in northeastern Florida. As of the 2010 census, the population was 190,039. The county seat is St. Augustine. Due to the inclusion of Ponte Vedra Beach, it is one of the highest-income counties in the United States....
to Palm Beach County
Palm Beach County, Florida
Palm Beach County is the largest county in the state of Florida in total area, and third in population. As of 2010, the county's estimated population was 1,320,134, making it the twenty-eighth most populous in the United States...
. It may occur up to 20 miles inland from the coast in the sub-surface. It is found as far north as Fort Fisher, North Carolina. It has also been formed in the South Island of New Zealand, where it outcrops in a disused quarry near Oamaru. The Oligocene
Oligocene
The Oligocene is a geologic epoch of the Paleogene Period and extends from about 34 million to 23 million years before the present . As with other older geologic periods, the rock beds that define the period are well identified but the exact dates of the start and end of the period are slightly...
deposits here are composed primarily of very well preserved brachiopod
Brachiopod
Brachiopods are a phylum of marine animals that have hard "valves" on the upper and lower surfaces, unlike the left and right arrangement in bivalve molluscs. Brachiopod valves are hinged at the rear end, while the front can be opened for feeding or closed for protection...
shells, in a matrix of brachiopod, echinoid, and bryozoan detritus and foraminifera
Foraminifera
The Foraminifera , or forams for short, are a large group of amoeboid protists which are among the commonest plankton species. They have reticulating pseudopods, fine strands of cytoplasm that branch and merge to form a dynamic net...
. 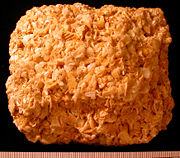 Occasionally quarried
Quarry
A quarry is a type of open-pit mine from which rock or minerals are extracted. Quarries are generally used for extracting building materials, such as dimension stone, construction aggregate, riprap, sand, and gravel. They are often collocated with concrete and asphalt plants due to the requirement...
or mined
Mining
Mining is the extraction of valuable minerals or other geological materials from the earth, from an ore body, vein or seam. The term also includes the removal of soil. Materials recovered by mining include base metals, precious metals, iron, uranium, coal, diamonds, limestone, oil shale, rock...
and used as a building stone in Florida
Florida
Florida is a state in the southeastern United States, located on the nation's Atlantic and Gulf coasts. It is bordered to the west by the Gulf of Mexico, to the north by Alabama and Georgia and to the east by the Atlantic Ocean. With a population of 18,801,310 as measured by the 2010 census, it...
for over 400 years, coquina forms the walls of the Castillo de San Marcos
Castillo de San Marcos
The Castillo de San Marcos site is the oldest masonry fort in the United States. It is located in the city of St. Augustine, Florida. Construction was begun in 1672 by the Spanish when Florida was a Spanish territory. During the twenty year period of British possession from 1763 until 1784, the...
, Saint Augustine. The stone makes a very good material for forts, particularly those built during the period of heavy cannon use. Because of coquina's softness, cannon balls would sink into, rather than shatter or puncture, the walls of the Castillo de San Marcos.

When first quarried, coquina is extremely soft. This softness makes it very easy to remove from the quarry and cut into shape. However, the stone is also at first much too soft to be used for building. In order to be used as a building material, the stone is left out to dry for approximately one to three years, which causes the stone to harden into a usable, but still comparatively soft, form.

Coquina has also been used as a source of paving material. It is usually poorly cemented and easily breaks into component shell or coral fragments, which can be substituted for gravel
Gravel
Gravel is composed of unconsolidated rock fragments that have a general particle size range and include size classes from granule- to boulder-sized fragments. Gravel can be sub-categorized into granule and cobble...
or crushed harder rocks
Rock (geology)
In geology, rock or stone is a naturally occurring solid aggregate of minerals and/or mineraloids.The Earth's outer solid layer, the lithosphere, is made of rock. In general rocks are of three types, namely, igneous, sedimentary, and metamorphic...
. Large pieces of coquina of unusual shape are sometimes used as landscape decoration.

Because coquina often includes a component of phosphate, it is sometimes mined for use as fertilizer
Fertilizer
Fertilizer is any organic or inorganic material of natural or synthetic origin that is added to a soil to supply one or more plant nutrients essential to the growth of plants. A recent assessment found that about 40 to 60% of crop yields are attributable to commercial fertilizer use...
.