Encyclopedia
A control tower, or more specifically an Air Traffic Control Tower (TWR), is the name of the airport building from which the air traffic control
Air traffic control
Air traffic control is a service provided by ground-based controllers who direct aircraft on the ground and in the air. The primary purpose of ATC systems worldwide is to separate aircraft to prevent collisions, to organize and expedite the flow of traffic, and to provide information and other...
unit controls the movement of aircraft on and around the airport. Control towers are also used to control the traffic for other forms of transportation such as rail transport
Rail transport
Rail transport is a means of conveyance of passengers and goods by way of wheeled vehicles running on rail tracks. In contrast to road transport, where vehicles merely run on a prepared surface, rail vehicles are also directionally guided by the tracks they run on...
(see illustration below), sea port or moveable bridge
Moveable bridge
A moveable bridge is a bridge that moves to allow passage for boats or barges. An advantage of making bridges movable include lower price, due to the absence of high piers and long approaches. The principal disadvantage is that the traffic on the bridge must be halted when it is opened for passages...
s. Most of the world's airports are non-towered
Non-towered airport
A non-towered airport, sometimes referred to as an uncontrolled airport, is an airport with no operating tower, or air traffic control unit...
or mandatory frequency
Mandatory frequency airport
An airport with a mandatory frequency , mandatory traffic advisory frequency or air/ground radio is an airport which does not have a control tower but still requires arriving and departing aircraft to communicate with other aircraft or a radio operator on a published frequency.Mandatory frequency...
— only a minority of airports have enough traffic to justify a control tower, though some airports may open temporary tower units during special events like an airshow
Airshow
An air show is an event at which aviators display their flying skills and the capabilities of their aircraft to spectators in aerobatics. Air shows without aerobatic displays, having only aircraft displayed parked on the ground, are called "static air shows"....
. Control towers are also located on aircraft carriers.

Medium-traffic airports may have only one controller staffing the control tower, and may not keep the tower open 24 hours per day. Busier airports usually have space for several controllers and other support staff, and operate 24 hours per day, 365 days per year. 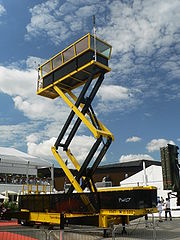 Full control tower structures usually have window
Window
A window is a transparent or translucent opening in a wall or door that allows the passage of light and, if not closed or sealed, air and sound. Windows are usually glazed or covered in some other transparent or translucent material like float glass. Windows are held in place by frames, which...
s that circle the entire top floor, giving all round vision. The windows are usually tilted outwards at 15 degrees, because otherwise the controllers would see the reflection of their equipment. The ceiling may also be painted black.


Other equipment may include the following:

The world's highest control tower is Vancouver Harbour Control Tower
Vancouver Harbour Control Tower
The Vancouver Harbour Air Control Tower, which serves Vancouver Harbour Water Airport, is placed on top of the skyscraper Granville Square in Vancouver, British Columbia, Canada...
, situated on top of the 142 meter skyscraper 200 Granville Square, in downtown Vancouver, Canada.
The world's tallest free standing control tower is the 132.2 m (434 feet) Suvarnabhumi Airport
Suvarnabhumi Airport
Suvarnabhumi Airport , also known as Bangkok International Airport, is an international airport serving Bangkok, Thailand. It was officially opened for limited domestic flight service on 15 September 2006, and opened for most domestic and all international commercial flights on 28 September...
control tower, 25 km east of Bangkok
Bangkok
Bangkok is the capital and largest urban area city in Thailand. It is known in Thai as Krung Thep Maha Nakhon or simply Krung Thep , meaning "city of angels." The full name of Bangkok is Krung Thep Mahanakhon Amon Rattanakosin Mahintharayutthaya Mahadilok Phop Noppharat Ratchathani Burirom...
, Thailand
Thailand
Thailand , officially the Kingdom of Thailand , formerly known as Siam , is a country located at the centre of the Indochina peninsula and Southeast Asia. It is bordered to the north by Burma and Laos, to the east by Laos and Cambodia, to the south by the Gulf of Thailand and Malaysia, and to the...
.

Air Traffic Control (ATC)
Air traffic control
Air traffic control is a service provided by ground-based controllers who direct aircraft on the ground and in the air. The primary purpose of ATC systems worldwide is to separate aircraft to prevent collisions, to organize and expedite the flow of traffic, and to provide information and other...

Terminal Radar Approach Control (TRACON)
Terminal Control Center
A terminal radar approach control is an air traffic control facility usually located within the vicinity of a large airport. Typically, the TRACON controls aircraft within a 20-50 nautical mile radius of the major airport and a number of "satellite airports" between surface and up to between and...

Virtual Air Traffic Simulation Network
Interlocking towers or signal boxes are terms used for control towers in the railroad industry.
The source of this article is wikipedia, the free encyclopedia.  The text of this article is licensed under the GFDL.