Encyclopedia
The Ilyushin Il-18 (NATO reporting name
NATO reporting name
NATO reporting names are classified code names for military equipment of the Eastern Bloc...
: Coot) is a large turboprop
Turboprop
A turboprop engine is a type of turbine engine which drives an aircraft propeller using a reduction gear.The gas turbine is designed specifically for this application, with almost all of its output being used to drive the propeller...
airliner
Airliner
An airliner is a large fixed-wing aircraft for transporting passengers and cargo. Such aircraft are operated by airlines. Although the definition of an airliner can vary from country to country, an airliner is typically defined as an aircraft intended for carrying multiple passengers in commercial...
that became one of the best known Soviet aircraft of its era as well as one of the most popular and durable, having first flown in 1957 and still in use over 50 years later. The Il-18 was one of the world's principal airliners for several decades and was widely exported. Due to the aircraft's airframe durability, many achieved over 45,000 flight hours. The Il-18's successor was the long range Il-62 jet airliner.

Two Soviet
Soviet Union
The Soviet Union , officially the Union of Soviet Socialist Republics , was a constitutionally socialist state that existed in Eurasia between 1922 and 1991....
aircraft shared the designation Ilyushin Il-18. The first Il-18 was a propeller-driven airliner of 1946 but after a year of test flights that programme was abandoned.

In the early 1950s a need to replace older designs and increase the size of the Soviet civil transport fleet, a Soviet Council of Ministers directive was issued on 30 December 1955 to the chief designers Kuznetsov and Ivenchko to develop new turboprop engines and to Ilyushin and Antonov to design an aircraft to use these engines. The two aircraft designs were developed as the Ilyushin Il-18 and the Antonov An-10
Antonov An-10
The Antonov An-10 was a four-engined turboprop passenger transport aircraft designed in the Soviet Union.-Design and development:...
and the engine chosen was the Kuznetsov NK-4 rather than the Ivchenko AI-20
Ivchenko AI-20
|-See also:-References:* Gunston, Bill. World Encyclopedia of Aero Engines. London:Guild Publishing, 1986.* Lambert, Mark. Jane's All The World's Aircraft 1993–94. Coulsdon, UK: Jane's Data Division, 1993. ISBN 0-7106-1066-1....
.

The Il-18 design had started in 1954 before the directive was issued and experience with the piston-engined Il-18 was used although the aircraft was a new design. The design was for a four-engined low-wing monoplane with a circular pressurised fuselage and a conventional tail. The forward retracting tricycle landing gear had four-wheels fitted on the main leg bogies, the main legs bogies rotated 90 degrees and retracted into the rear of the inboard engines. A new feature at the time was the fitting of a weather radar in the nose and it was the first soviet airliner to have an automatic approach system. The aircraft has two entry doors on the port-side before and after the wing and two overwing emergency exist on each side.

The prototype SSSR-L5811 was rolled out in June 1957 and after ground-testing it began taxying test and high-speed runs on 1 July 1957. On 4 July 1957 the prototype first flew from Khodynka. On 10 July 1957 the aircraft was flown to Moscow-Vnukovo Airport
Vnukovo International Airport
Vnukovo International Airport , is a dual runway international airport located southwest from the centre of Moscow, Russia. It is one of three major airports serving Moscow...
to be presented to a soviet government commission, also present was the prototype Antonov An-10
Antonov An-10
The Antonov An-10 was a four-engined turboprop passenger transport aircraft designed in the Soviet Union.-Design and development:...
and the Tupolev Tu-114
Tupolev Tu-114
The Tupolev Tu-114 Rossiya is a turboprop-powered long-range airliner designed by the Tupolev design bureau and built in the USSR from May 1955....
. The Il-18 type was formally named Moskva and this was painted on the fuselage, although the name was not used when the aircraft entered production.

The Moscow Machinery Plant No. 30 located at Khodynka near where the Ilyushin design office and the prototype had been built was chosen to manufacture the aircraft. During 1957 the plant began to reduce its production of the Ilyushin Il-14
Ilyushin Il-14
The Ilyushin Il-14 was a Soviet twin-engine commercial and military personnel and cargo transport aircraft that first flew in 1950, and entered service in 1954. Il-14 was also manufactured in East Germany by VVB Flugzeugbau, in Czechoslovakia as the Avia 14, and in China under the Chinese...
and prepare to build the production aircraft designated IL-18A. The Il-18A was only different to the prototype in minor details mainly internal configuration to increase the seating from 75 to 89.

The first production aircraft were powered by the Kuznetsov NK-4 but the engines were plagued with problems so the Council of Ministers decreed in July 1958 that all production from November 1958 would use the Ivchenko AI-20
Ivchenko AI-20
|-See also:-References:* Gunston, Bill. World Encyclopedia of Aero Engines. London:Guild Publishing, 1986.* Lambert, Mark. Jane's All The World's Aircraft 1993–94. Coulsdon, UK: Jane's Data Division, 1993. ISBN 0-7106-1066-1....
and earlier production would be re-engined. Only 20 IL-18As were built before production changed to the improved Il-18B, this new variant had a higher-gross weight, the nose was re-designed with a larger radome which increased the length by 20 cm. The first Il-18B flew on 30 September 1958 powered by the AI-20, a VIP variant was also built as the IL-18S for the Soviet Air Force.

With experience of the earlier aircraft a further improvement was the Il-18V variant. The Il-18V was structural the same but the interior was re-designed including moving the galley and some minor system changes. The first Il-18V appeared in December 1959 and was to continue into production until 1965 after 334 had been built.

From April 1961 a TG-18 Auxiliary Power Unit
Auxiliary power unit
An auxiliary power unit is a device on a vehicle that provides energy for functions other than propulsion. They are commonly found on large aircraft, as well as some large land vehicles.-Function:...
was fitted for ground starting rather than the bank of lead-acid batteries, some aircraft were modified to allow the APU to be run in flight.

The first Il-18, equipped with NK-4 turboprop engines, flew on 4 July 1957. On 17 September 1958 the aircraft first flew with the new Ivchenko AI-20
Ivchenko AI-20
|-See also:-References:* Gunston, Bill. World Encyclopedia of Aero Engines. London:Guild Publishing, 1986.* Lambert, Mark. Jane's All The World's Aircraft 1993–94. Coulsdon, UK: Jane's Data Division, 1993. ISBN 0-7106-1066-1....
engines. Vladimir Kokkinaki
Vladimir Kokkinaki
Vladimir Konstantinovich Kokkinaki was a test pilot in the Soviet Union, setting twenty-two world records and serving as president of the Fédération Aéronautique Internationale.-Life and career:...
was the test pilot. Between 1958 and 1960 twenty-five world records were set by this aircraft, among them flight range and altitude records with various payloads. In 1958 the aircraft was awarded the Brussels World Fair
Expo '58
Expo 58, also known as the Brussels World’s Fair, Brusselse Wereldtentoonstelling or Exposition Universelle et Internationale de Bruxelles, was held from 17 April to 19 October 1958...
Grand Prix. In April 1979 a monument was unveiled at Sheremetyevo airport
Sheremetyevo International Airport
Sheremetyevo International Airport , is an international airport located in the Moscow Oblast, Russia, north-west of central Moscow. It is a hub for the passenger operations of the Russian international airline Aeroflot, and one of the three major airports serving Moscow along with Domodedovo...
to commemorate this remarkable aircraft.

Seventeen foreign air carriers acquired 125 Il-18 aircraft, seating 100-120 passengers. Some are still in service in Siberia
Siberia
Siberia is an extensive region constituting almost all of Northern Asia. Comprising the central and eastern portion of the Russian Federation, it was part of the Soviet Union from its beginning, as its predecessor states, the Tsardom of Russia and the Russian Empire, conquered it during the 16th...
and the Middle East
Middle East
The Middle East is a region that encompasses Western Asia and Northern Africa. It is often used as a synonym for Near East, in opposition to Far East...
.

Il-18A: The original production model, powered by either Kuznetsov NK-4 or Ivchenko AI-20 turboprop engines.
Il-18B: First production model, which could seat 84 passengers.
Il-18S: VIP variant of Il-18B
Il-18V: Standard Aeroflot version, which entered service in 1961. The Il-18V was powered by four Ivchenko AI-20K turboprop engines, seating 90-100 passengers.
Il-18I: Equipped with more powerful Ivchenko AI-20M turboprop engines, producing 3,170 kW (4,250 shp). Seating increased to 122 passengers.
Il-18D: Silmilar to Il-18I, but equipped with an extra centre section fuel tank for increased range. The Il-18D is fitted with four 3,169 ekW (4,250 hp) Ivchenko AI-20M turboprop engines.
Il-18E: Similar to the Il-18I, but without the increased fuel capacity.
Il-18T: This designation was given to a number of Aeroflot
Aeroflot
OJSC AeroflotRussian Airlines , commonly known as Aeroflot , is the flag carrier and largest airline of the Russian Federation, based on passengers carried per year...
aircraft, which were converted into cargo transport aircraft.
IL-18TD

One IL-18T was modified as a military transport variant to take either 69 stretcher cases or 118 paratroopers. Not wanted by the military it was converted to IL-18D standard.

Two IL-18Ds modified as fishery reconnaissance aircraft for the Polar Institute of Oceanic Fishery and Oceanography, the modification mainly involved the fitment of specialised mission equipment. First flown in 1985 they were later modified back as standard Il-18Ds.

One IL-18V was modified as a navigator trainer including two dorsal astro-sextant windows. Although it was tested and found acceptable the Soviet Air Force used a variant of the twin-jet Tupolev Tu-124
Tupolev Tu-124
The Tupolev Tu-124 was a 56 passenger short range twinjet airliner built in the Soviet Union. It was the world's first turbofan-powered airliner.- Design and development :...
instead.

Four Telemetry and Communications Relay aircraft used to support the Soviet space activities, later replaced by a variant of the IL-76.

Same as the Il-22 but had new mission equipment.

Two Il-18Ds modified for ice reconnaissance similar to the IL-20M but with civilian reconnaissance equipment, both later modified back to standard configuration and sold.

Designation of a number of different test and research aircraft, normally had a letter suffix like SL-18D for avionics trials. 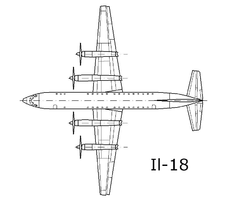