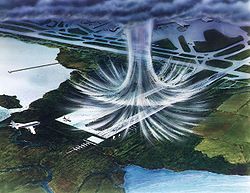 A microburst is a very localized column of sinking air, producing damaging divergent and straight-line winds at the surface that are similar to, but distinguishable from, tornado
Tornado
A tornado is a violent, dangerous, rotating column of air that is in contact with both the surface of the earth and a cumulonimbus cloud or, in rare cases, the base of a cumulus cloud. They are often referred to as a twister or a cyclone, although the word cyclone is used in meteorology in a wider...
es, which generally have convergent damage. There are two types of microbursts: wet microbursts and dry microbursts. They go through three stages in their life cycle: the downburst, outburst, and cushion stages. The scale and suddenness of a microburst makes it a great danger to aircraft due to the low-level wind shear
Wind shear
Wind shear, sometimes referred to as windshear or wind gradient, is a difference in wind speed and direction over a relatively short distance in the atmosphere...
caused by its gust front, with several fatal crashes having been attributed to the phenomenon over the past several decades.

A microburst often has high winds that can knock over fully grown trees. They usually last for a duration of a couple of seconds to several minutes.

The term was defined by senior weather expert Tetsuya Theodore Fujita as affecting an area 4 km (2.5 mi) in diameter or less, distinguishing them as a type of downburst
Downburst
A downburst is created by an area of significantly rain-cooled air that, after reaching ground level, spreads out in all directions producing strong winds. Unlike winds in a tornado, winds in a downburst are directed outwards from the point where it hits land or water...
and apart from common wind shear
Wind shear
Wind shear, sometimes referred to as windshear or wind gradient, is a difference in wind speed and direction over a relatively short distance in the atmosphere...
which can encompass greater areas. Fujita also coined the term macroburst for downbursts larger than 4 km (2.5 mi), a scale of size known as the mesoscale.

A distinction can be made between a wet microburst which consists of precipitation and a dry microburst which consists of virga
Virga
In meteorology, virga is an observable streak or shaft of precipitation that falls from a cloud but evaporates before reaching the ground. At high altitudes the precipitation falls mainly as ice crystals before melting and finally evaporating; this is usually due to compressional heating, because...
. They generally are formed by precipitation-cooled air rushing to the surface, but they perhaps also could be powered from the high speed winds of the jet stream
Jet stream
Jet streams are fast flowing, narrow air currents found in the atmospheres of some planets, including Earth. The main jet streams are located near the tropopause, the transition between the troposphere and the stratosphere . The major jet streams on Earth are westerly winds...
deflected to the surface in a thunderstorm
Thunderstorm
A thunderstorm, also known as an electrical storm, a lightning storm, thundershower or simply a storm is a form of weather characterized by the presence of lightning and its acoustic effect on the Earth's atmosphere known as thunder. The meteorologically assigned cloud type associated with the...
(see downburst
Downburst
A downburst is created by an area of significantly rain-cooled air that, after reaching ground level, spreads out in all directions producing strong winds. Unlike winds in a tornado, winds in a downburst are directed outwards from the point where it hits land or water...
). 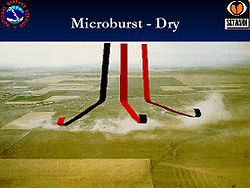 When rain falls below cloud base or is mixed with dry air, it begins to evaporate and this evaporation process cools the air. The cool air descends and accelerates as it approaches the ground. When the cool air approaches the ground, it spreads out in all directions and this divergence of the wind is the signature of the microburst. High winds spread out in this type of pattern showing little or no curvature are known as straight-line winds.

Dry microbursts, produced by high based thunderstorms that generate little surface rainfall, occur in environments characterized by a thermodynamic profile exhibiting an inverted-V at thermal and moisture profile, as viewed on a Skew-T log-P thermodynamic diagram. Wakimoto (1985) developed a conceptual model (over the High Plains of the United States
United States
The United States of America is a federal constitutional republic comprising fifty states and a federal district...
) of a dry microburst environment that comprised three important variables: mid-level moisture, a deep and dry adiabatic lapse rate in the sub-cloud layer, and low surface relative humidity. 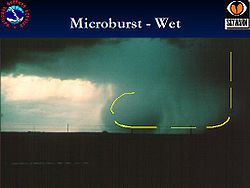 Wet microbursts are downbursts accompanied by significant precipitation at the surface which are warmer than their environment (Wakimoto, 1998). These downbursts rely more on the drag of precipitation for downward acceleration of parcels than negative buoyancy which tend to drive "dry" microbursts. As a result, higher mixing ratios are necessary for these downbursts to form (hence the name "wet" microbursts). Melting of ice, particularly hail, appears to play an important role in downburst formation (Wakimoto and Bringi, 1988), especially in the lowest one kilometer above ground level (Proctor, 1989). These factors, among others, make forecasting wet microbursts a difficult task.

The evolution of downbursts is broken down into three stages: the contact stage, the outburst stage and the cushion stage.

In the case of a wet microburst, the atmosphere is warm and humid in the lower levels and dry aloft. As a result, when thunderstorms develop, heavy rain is produced but some of the rain evaporates in the drier air aloft. As a result the air aloft is cooled thereby causing it to sink and spread out rapidly as it hits the ground. The result can be both strong damaging winds and heavy rainfall occurring in the same area. Wet downbursts can be identified visually by such features as a shelf cloud, while on radar they sometimes produce bow echoes.
In the case of a dry microburst, the atmosphere is warm but dry in the lower levels and moist aloft. Thus when showers and thunderstorms develop, most of the rain evaporates before reaching the ground.

By decomposing the variables into a basic state and a perturbation, defining the basic states, and using the Ideal Gas Law (

), then the equation can be written in the form

where B is used to denote buoyancy. Note that the virtual temperature correction usually is rather small and to a good approximation, it can be ignored when computing buoyancy. Finally, the effects of precipitation loading on the vertical motion are parameterized by including a term that decreases buoyancy as the liquid water mixing ratio (

) increases, leading to the final form of the parcel's momentum equation:

The first term is the effect of perturbation pressure gradients on vertical motion. In some storms this term has a large effect on updrafts (Rotunno and Klemp, 1982) but there is not much reason to believe it has much of an impact on downdrafts (at least to a first approximation) and therefore will be ignored.

The second term is the effect of buoyancy on vertical motion. Cleary, in the case of microbursts, one expects to find that B is negative meaning the parcel is cooler than its environment. This cooling typically takes place as a result of phase changes (evaporation, melting, and sublimation). Precipitation particles that are small, but are in great quantity, promote a maximum contribution to cooling and, hence, to creation of negative buoyancy. The major contribution to this process is from evaporation.

The last term is the effect of water loading. Whereas evaporation is promoted by large numbers of small droplets, it only takes a few large drops to contribute substantially to the downward acceleration of air parcels. This term is associated with storms having high precipitation rates. Comparing the effects of water loading to those associated with buoyance, if a parcel has a liguid water mixing ration of 1.0 gkg−1, this is roughly equivalent to about 0.3 K of negative buoyancy; the latter is a large (but not extreme) value. Therefore, in general terms, negative buoyancy is typically the major contributor to downdrafts.

where NAPE is the Negative Available Potential Energy,

and where LFS denotes the Level of Free Sink for a descending parcel and SFC denotes the surface. This means that the maximum downward motion is associated with the integrated negative buoyancy. Even a relatively modest negative buoyancy can result in a substantial downdraft if it is maintained over a relatively large depth. A downward speed of 25 m/s results from the relatively modest NAPE value of 312.5 m²s−2. To a first approximation, the maximum gust is roughly equal to the maximum downdraft speed. 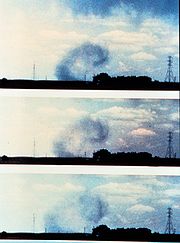 The scale and suddenness of a microburst makes it a great danger to aircraft, particularly those at low altitude which are taking off and landing. The following are some fatal crashes and/or aircraft incidents that have been attributed to microbursts in the vicinity of airports:


A microburst often causes aircraft to crash when they are attempting to land (the above-mentioned BOAC and Pan Am flights are notable exceptions). The microburst is an extremely powerful gust of air that, once hitting the ground, spreads in all directions. As the aircraft is coming in to land, the pilots try to slow the plane to an appropriate speed. When the microburst hits, the pilots will see a large spike in their airspeed, caused by the force of the headwind created by the microburst. A pilot inexperienced with microbursts would try to decrease the speed. The plane would then travel through the microburst, and fly into the tailwind, causing a sudden decrease in the amount of air flowing across the wings. The decrease in airflow over the wings of the aircraft causes a drop in the amount of lift produced. This decrease in lift combined with a strong downward flow of air can cause the thrust required to remain at altitude to exceed what is available. 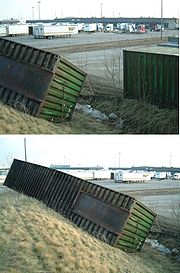