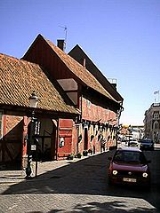 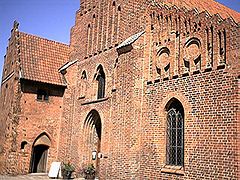 Ystad (ˈyːsta) is a "locality", or town
Urban areas in Sweden
Urban area is a common English translation of the Swedish term tätort. The official term in English, used by Statistics Sweden, is, however, locality. There are 1,940 localities in Sweden . They could be compared with census-designated places in the United States.A tätort in Sweden has a minimum of...
, and the seat of Ystad Municipality
Ystad Municipality
Ystad Municipality is a municipality in Skåne County in southern Sweden. Its seat is located in the city Ystad.The present municipality was created in 1971 by the amalgamation of the former City of Ystad with four surrounding municipalities.-Localities:There are nine urban areas in Ystad...
, Skåne County
Skåne County
Skåne County is the southernmost administrative county or län, of Sweden, basically corresponding to the historical province Scania. It borders the counties of Halland, Kronoberg and Blekinge. The seat of residence for the Skåne Governor is the town of Malmö...
, Sweden
Sweden
Sweden , officially the Kingdom of Sweden , is a Nordic country on the Scandinavian Peninsula in Northern Europe. Sweden borders with Norway and Finland and is connected to Denmark by a bridge-tunnel across the Öresund....
, with 17,286 inhabitants (in 2005).

Settlement dates back to the 11th century and the town has become a busy ferryport, local administrative centre and tourist attraction. It is associated with the fictional detective Kurt Wallander
Kurt Wallander
Kurt Wallander is a fictional character created by Swedish crime writer Henning Mankell. The protagonist of several mystery novels, set in and around the town of Ystad, 60 km south-east of the city of Malmö, in the southern province of Skåne...
whose stories, by Henning Mankell
Henning Mankell
Henning Mankell is a Swedish crime writer, children's author, leftist activist and dramatist, best known for a series of mystery novels starring his most famous creation, Inspector Kurt Wallander.-Life and career:...
, are set in Ystad.

In 1285, the town's name was written Ystath. Its original meaning is not fully understood, but probably the "y" has something to do with an old word for the yew tree
Taxus
Taxus is a genus of yews, small coniferous trees or shrubs in the yew family Taxaceae. They are relatively slow-growing and can be very long-lived, and reach heights of 1-40 m, with trunk diameters of up to 4 m...
, -stad is town, or rather place. In Danish times before 1658 the spelling was Ysted.

After Absalon, Bishop of Roskilde and Archbishop of Lund
Lund
-Main sights:During the 12th and 13th centuries, when the town was the seat of the archbishop, many churches and monasteries were built. At its peak, Lund had 27 churches, but most of them were demolished as result of the Reformation in 1536. Several medieval buildings remain, including Lund...
, brought peace to the area in the 11th century, fishing families settled at the mouth of the river Vassa. Herring fishing became the main source of trade. Ystad was not mentioned in documents until 1244, in a record of King Eric
Eric IV of Denmark
Eric IV, also known as Eric Ploughpenny , was king of Denmark from 1241 until his death in 1250. He was the son of King Valdemar II of Denmark by his wife, Infanta Berengária of Portugal, and brother to King Abel and King Christopher I.-Early life:...
's visit to the town with his brother, Abel. A Franciscan monastery, Gråbrödraklostret, was founded in 1267. Ystad joined the Hanseatic League
Hanseatic League
The Hanseatic League was an economic alliance of trading cities and their merchant guilds that dominated trade along the coast of Northern Europe...
in the 14th century. The charter of 1599 gave the town the right to export
Export
The term export is derived from the conceptual meaning as to ship the goods and services out of the port of a country. The seller of such goods and services is referred to as an "exporter" who is based in the country of export whereas the overseas based buyer is referred to as an "importer"...
oxen. Ystad, together with all of Scania
Scania
Scania is the southernmost of the 25 traditional non-administrative provinces of Sweden, constituting a peninsula on the southern tip of the Scandinavian peninsula, and some adjacent islands. The modern administrative subdivision Skåne County is almost, but not totally, congruent with the...
, was transferred from Denmark
Denmark
Denmark is a Scandinavian country in Northern Europe. The countries of Denmark and Greenland, as well as the Faroe Islands, constitute the Kingdom of Denmark . It is the southernmost of the Nordic countries, southwest of Sweden and south of Norway, and bordered to the south by Germany. Denmark...
to Sweden following the Treaty of Roskilde
Treaty of Roskilde
The Treaty of Roskilde was concluded on 26 February or 8 March 1658 during the Second Northern War between Frederick III of Denmark–Norway and Charles X Gustav of Sweden in the Danish city of Roskilde...
in 1658. By 1866 Ystad had a railway connection and it was established as a garrison town
Garrison town
Garrison town may refer to* Garrison* Garrison community, poor, inner-city communities controlled by either of Jamaica's two main political parties...
in the 1890s. After World War II
World War II
World War II, or the Second World War , was a global conflict lasting from 1939 to 1945, involving most of the world's nations—including all of the great powers—eventually forming two opposing military alliances: the Allies and the Axis...
, ferry
Ferry
A ferry is a form of transportation, usually a boat, but sometimes a ship, used to carry primarily passengers, and sometimes vehicles and cargo as well, across a body of water. Most ferries operate on regular, frequent, return services...
services to Poland
Poland
Poland , officially the Republic of Poland , is a country in Central Europe bordered by Germany to the west; the Czech Republic and Slovakia to the south; Ukraine, Belarus and Lithuania to the east; and the Baltic Sea and Kaliningrad Oblast, a Russian exclave, to the north...
and to the Danish island of Bornholm
Bornholm
Bornholm is a Danish island in the Baltic Sea located to the east of the rest of Denmark, the south of Sweden, and the north of Poland. The main industries on the island include fishing, arts and crafts like glass making and pottery using locally worked clay, and dairy farming. Tourism is...
were opened.

The town has two large medieval churches, the Church of Saint Peter (also known as Klostret) and the Church of the Virgin Mary (Mariakyrkan), both highly influenced by Gothic
Gothic architecture
Gothic architecture is a style of architecture that flourished during the high and late medieval period. It evolved from Romanesque architecture and was succeeded by Renaissance architecture....
Hansa
Hanseatic League
The Hanseatic League was an economic alliance of trading cities and their merchant guilds that dominated trade along the coast of Northern Europe...
architecture (can also be seen in churches around the Baltic Sea
Baltic Sea
The Baltic Sea is a brackish mediterranean sea located in Northern Europe, from 53°N to 66°N latitude and from 20°E to 26°E longitude. It is bounded by the Scandinavian Peninsula, the mainland of Europe, and the Danish islands. It drains into the Kattegat by way of the Øresund, the Great Belt and...
, for instance in Helsingborg
Helsingborg
Helsingborg is a city and the seat of Helsingborg Municipality, Skåne County, Sweden with 97,122 inhabitants in 2010. Helsingborg is the centre of an area in the Øresund region of about 320,000 inhabitants in north-west Scania, and is Sweden's closest point to Denmark, with the Danish city...
, Malmö
Malmö
Malmö , in the southernmost province of Scania, is the third most populous city in Sweden, after Stockholm and Gothenburg.Malmö is the seat of Malmö Municipality and the capital of Skåne County...
and Rostock
Rostock
Rostock -Early history:In the 11th century Polabian Slavs founded a settlement at the Warnow river called Roztoc ; the name Rostock is derived from that designation. The Danish king Valdemar I set the town aflame in 1161.Afterwards the place was settled by German traders...
).

In addition, there are areas of surviving medieval town architecture.

Some of the main industries of the town are trade, handicraft and tourism, derived from being one of the best preserved medieval towns in the Scania province and its association with the Wallander detective novels.

There is an active port with ferry and train services.

The ferry port has services to the Danish island of Bornholm
Bornholm
Bornholm is a Danish island in the Baltic Sea located to the east of the rest of Denmark, the south of Sweden, and the north of Poland. The main industries on the island include fishing, arts and crafts like glass making and pottery using locally worked clay, and dairy farming. Tourism is...
and to Świnoujście
Swinoujscie
Świnoujście is a city and seaport on the Baltic Sea and Szczecin Lagoon, located in the extreme north-west of Poland. It is situated mainly on the islands of Uznam and Wolin, but also occupies smaller islands, of which the largest is Karsibór island, once part of Usedom, now separated by a Piast...
(formerly Swinemünde), in Poland
Poland
Poland , officially the Republic of Poland , is a country in Central Europe bordered by Germany to the west; the Czech Republic and Slovakia to the south; Ukraine, Belarus and Lithuania to the east; and the Baltic Sea and Kaliningrad Oblast, a Russian exclave, to the north...
, forming part of the E65
European route E65
European route E 65 is a north-south Class-A European route that begins in Malmö, Sweden and ends in Chaniá, Greece. The road is about in length.-Itinerary:* Sweden** E 65: Malmö – Ystad* Baltic sea, ferry Ystad-Świnoujście* Poland...
road route south from Malmö. The town is on the railway line between Malmö
Malmö
Malmö , in the southernmost province of Scania, is the third most populous city in Sweden, after Stockholm and Gothenburg.Malmö is the seat of Malmö Municipality and the capital of Skåne County...
and Simrishamn
Simrishamn
Simrishamn is a locality and the seat of Simrishamn Municipality, Skåne County, Sweden with 6,546 inhabitants in 2005. Simrishamn is, despite its small population, for historical reasons normally still referred to as a city....
(operated by Skåne Commuter Rail
Skåne commuter rail
The Skåne Commuter Rail is a commuter rail system in Skåne County, Sweden. The system also acts as a regional rail system, as it serves other cities over from the principal city of Malmö.- Lines inside Skåne :Local trains, called Pågatåg...
) and has direct rail services to Copenhagen
Copenhagen
Copenhagen is the capital and largest city of Denmark, with an urban population of 1,199,224 and a metropolitan population of 1,930,260 . With the completion of the transnational Øresund Bridge in 2000, Copenhagen has become the centre of the increasingly integrating Øresund Region...
via the Øresund Bridge (operated by Danish State Railways).

The most popular sport in Ystad is handball
Team handball
Handball is a team sport in which two teams of seven players each pass a ball to throw it into the goal of the other team...
, with two big clubs. Ystads IF is in Elitserien
Elitserien (handball)
Elitserien is the highest league in the league system of Swedish handball and comprises the top 14 Swedish handball teams. The first season began in 1931-32. The season ends with a play-off and a final like Super Bowl....
(the highest Swedish national league, as of 2008) whilst IFK Ystad is situated in Division 1 (the second highest league, as of 2008). Several famous handball players have played one or other of these clubs, the most famous one probably being Per Carlén
Per Carlén
Per Carlén is a former handball player. He is the father of Swedish national handball player Oscar Carlén.- Player career:...
.