Encyclopedia
Carl Christian Constantin Hansen (Constantin Hansen) (3 November 1804 – 29 March 1880) was one of the painters associated with the Golden Age of Danish Painting
Golden Age of Danish Painting
The Danish Golden Age covers the period of creative production in Denmark, especially during the first half of the 19th century. Although Copenhagen had suffered from fires, bombardment and national bankruptcy, the arts took on a new period of creativity catalysed by Romanticism from Germany...
. He was deeply interested in literature
Literature
Literature is the art of written works, and is not bound to published sources...
and mythology
Mythology
The term mythology can refer either to the study of myths, or to a body or collection of myths. As examples, comparative mythology is the study of connections between myths from different cultures, whereas Greek mythology is the body of myths from ancient Greece...
, and inspired by art historian Niels Lauritz Høyen
Niels Lauritz Høyen
Niels Laurits Andreas Høyen, , Danish is considered to be the first Danish art historian and critic. He promoted a Danish nationalistic art through his writings and lectures, and exerted a far reaching effect on contemporary artists...
, he tried to recreate a national historical painting
History painting
History painting is a genre in painting defined by subject matter rather than an artistic style, depicting a moment in a narrative story, rather than a static subject such as a portrait...
based on Norse mythology
Norse mythology
Norse mythology, a subset of Germanic mythology, is the overall term for the myths, legends and beliefs about supernatural beings of Norse pagans. It flourished prior to the Christianization of Scandinavia, during the Early Middle Ages, and passed into Nordic folklore, with some aspects surviving...
. He painted also many altarpiece
Altarpiece
An altarpiece is a picture or relief representing a religious subject and suspended in a frame behind the altar of a church. The altarpiece is often made up of two or more separate panels created using a technique known as panel painting. It is then called a diptych, triptych or polyptych for two,...
s and portrait
Portrait
thumb|250px|right|Portrait of [[Thomas Jefferson]] by [[Rembrandt Peale]], 1805. [[New-York Historical Society]].A portrait is a painting, photograph, sculpture, or other artistic representation of a person, in which the face and its expression is predominant. The intent is to display the likeness,...
s, including the historical The Constitutional Assembly (Den grundlovgivende Rigsforsamling) between 1861-1865.

He was born in Rome
Rome
Rome is the capital of Italy and the country's largest and most populated city and comune, with over 2.7 million residents in . The city is located in the central-western portion of the Italian Peninsula, on the Tiber River within the Lazio region of Italy.Rome's history spans two and a half...
, the son of portrait painter Hans Hansen. The family soon moved to Vienna
Vienna
Vienna is the capital and largest city of the Republic of Austria and one of the nine states of Austria. Vienna is Austria's primary city, with a population of about 1.723 million , and is by far the largest city in Austria, as well as its cultural, economic, and political centre...
where the widow of Wolfgang Amadeus Mozart
Wolfgang Amadeus Mozart
Wolfgang Amadeus Mozart , baptismal name Johannes Chrysostomus Wolfgangus Theophilus Mozart , was a prolific and influential composer of the Classical era. He composed over 600 works, many acknowledged as pinnacles of symphonic, concertante, chamber, piano, operatic, and choral music...
became godmother at his christening. The family moved to Copenhagen
Copenhagen
Copenhagen is the capital and largest city of Denmark, with an urban population of 1,199,224 and a metropolitan population of 1,930,260 . With the completion of the transnational Øresund Bridge in 2000, Copenhagen has become the centre of the increasingly integrating Øresund Region...
within his first year, where he was raised.

He entered the architecture school of the Royal Danish Academy of Art
Royal Danish Academy of Art
The Royal Danish Academy of Fine Arts has provided a practice-oriented complement to the scholarly investigation of the arts carried out at Danish universities for more than 250 years, playing a crucial part in the development of the distinctive tradition of the art of Denmark.- History :The Royal...
(Det Kongelige Danske Kunstakademi) at 12 years of age, but changes his course of study to painting at the age of 21. He began his training under Christoffer Wilhelm Eckersberg
Christoffer Wilhelm Eckersberg
Christoffer Wilhelm Eckersberg was a Danish painter. He was born in Blåkrog in the Duchy of Schleswig , to Henrik Vilhelm Eckersberg, painter and carpenter, and Ingeborg Nielsdatter...
in 1828. He lost both his parents at about this time to typhus
Typhus
Epidemic typhus is a form of typhus so named because the disease often causes epidemics following wars and natural disasters...
, and became the sole supporter of his younger sisters. He took over several commissions that had belonged to his father, including some copies to the Portrait Collection at Frederiksborg Palace
Frederiksborg Palace
Frederiksborg castle is a castle in Hillerød, Denmark. It was built as a royal residence for King Christian IV, and is now known as The Museum of National History. The current building replaced a previous castle erected by Frederick II, and is the largest Renaissance palace in Scandinavia...
and decorative paintings to Christiansborg Palace
Christiansborg Palace
Christiansborg Palace, , on the islet of Slotsholmen in central Copenhagen, is the seat of the Folketing , the Danish Prime Minister's Office and the Danish Supreme Court...
. 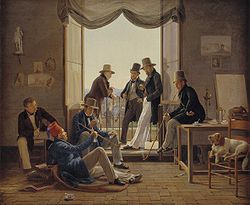 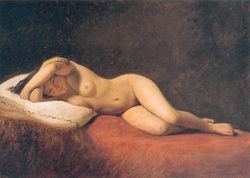 In 1835 he received a two-year stipend to travel abroad, which was followed up by an additional year's stipend. His travels took him through Berlin
Berlin
Berlin is the capital city of Germany and is one of the 16 states of Germany. With a population of 3.45 million people, Berlin is Germany's largest city. It is the second most populous city proper and the seventh most populous urban area in the European Union...
, Dresden
Dresden
Dresden is the capital city of the Free State of Saxony in Germany. It is situated in a valley on the River Elbe, near the Czech border. The Dresden conurbation is part of the Saxon Triangle metropolitan area....
, Prague
Prague
Prague is the capital and largest city of the Czech Republic. Situated in the north-west of the country on the Vltava river, the city is home to about 1.3 million people, while its metropolitan area is estimated to have a population of over 2.3 million...
, Nuremberg
Nuremberg
Nuremberg[p] is a city in the German state of Bavaria, in the administrative region of Middle Franconia. Situated on the Pegnitz river and the Rhine–Main–Danube Canal, it is located about north of Munich and is Franconia's largest city. The population is 505,664...
and Munich
Munich
Munich The city's motto is "" . Before 2006, it was "Weltstadt mit Herz" . Its native name, , is derived from the Old High German Munichen, meaning "by the monks' place". The city's name derives from the monks of the Benedictine order who founded the city; hence the monk depicted on the city's coat...
on his way to Italy
Italy
Italy , officially the Italian Republic languages]] under the European Charter for Regional or Minority Languages. In each of these, Italy's official name is as follows:;;;;;;;;), is a unitary parliamentary republic in South-Central Europe. To the north it borders France, Switzerland, Austria and...
, where he travelled extensively and stayed longer periods in Rome
Rome
Rome is the capital of Italy and the country's largest and most populated city and comune, with over 2.7 million residents in . The city is located in the central-western portion of the Italian Peninsula, on the Tiber River within the Lazio region of Italy.Rome's history spans two and a half...
, Naples
Naples
Naples is a city in Southern Italy, situated on the country's west coast by the Gulf of Naples. Lying between two notable volcanic regions, Mount Vesuvius and the Phlegraean Fields, it is the capital of the region of Campania and of the province of Naples...
and Pompeii
Pompeii
The city of Pompeii is a partially buried Roman town-city near modern Naples in the Italian region of Campania, in the territory of the comune of Pompei. Along with Herculaneum, Pompeii was destroyed and completely buried during a long catastrophic eruption of the volcano Mount Vesuvius spanning...
. In Italy he met fellow Dane, the sculptor Bertel Thorvaldsen
Bertel Thorvaldsen
Bertel Thorvaldsen was a Danish-Icelandic sculptor of international fame, who spent most of his life in Italy . Thorvaldsen was born in Copenhagen into a Danish/Icelandic family of humble means, and was accepted to the Royal Academy of Arts when he was eleven years old...
. He travelled with other Danish artists, including Jørgen Roed
Jørgen Roed
Jørgen Roed, , Danish portrait and genre painter associated with the Golden Age of Danish Painting, was born in Ringsted to Peder Jørgensen Roed and wife, Ellen Hansdatter.-Growing up:...
, Christen Købke
Christen Købke
Christen Schiellerup Købke , Danish painter, was born in Copenhagen to Peter Berendt Købke, a baker, and his wife Cecilie Margrete. He was one of 11 children...
and decorative painter Georg Christian Hilker.
The Copenhagen Art Union (Kunstforening) commissioned a painting from Hansen in 1837. He provided them with "A Company of Danish Artists in Rome" (Et Selskab af danske Kunstnere i Rom). In addition he painted Italian folk scenes, and studies of Roman antiquities and architecture that reflect Eckersberg's spirit.

After eight years in Italy he finally returned to Denmark, staying briefly in Munich where he studied the technique of fresco
Fresco
Fresco is any of several related mural painting types, executed on plaster on walls or ceilings. The word fresco comes from the Greek word affresca which derives from the Latin word for "fresh". Frescoes first developed in the ancient world and continued to be popular through the Renaissance...
painting, in anticipation of a commission, along with Georg Hilker, to decorate the University of Copenhagen
University of Copenhagen
The University of Copenhagen is the oldest and largest university and research institution in Denmark. Founded in 1479, it has more than 37,000 students, the majority of whom are female , and more than 7,000 employees. The university has several campuses located in and around Copenhagen, with the...
's vestibule on Frue Plads. This work continued from 1844-1853. Hansen painted the mythological figures, while Hilker painted the decorations and frameworks.

He married Magdalene Barbara Købke in 1846, and they had thirteen children. However, four children died within one year after being born and one of their sons, Hans Christian, was killed at the age of nineteen in a shipwreck.
In 1854 he was named professor at the Academy, but first became member of the Academy in 1864. One of his daughters, Elise Konstantin-Hansen, became a recognized painter, and another Kristiane Konstantin-Hansen, became a tapestry
Tapestry
Tapestry is a form of textile art, traditionally woven on a vertical loom, however it can also be woven on a floor loom as well. It is composed of two sets of interlaced threads, those running parallel to the length and those parallel to the width ; the warp threads are set up under tension on a...
weaver.
The source of this article is wikipedia, the free encyclopedia.  The text of this article is licensed under the GFDL.