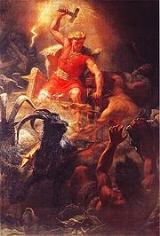 Overview
Norse mythology, a subset of Germanic mythology
Germanic mythology
Germanic mythology is a comprehensive term for myths associated with historical Germanic paganism, including Norse mythology, Anglo-Saxon mythology, Continental Germanic mythology, and other versions of the mythologies of the Germanic peoples...
, is the overall term for the myths, legends and beliefs about supernatural beings of Norse pagans
Norse paganism
Norse paganism is the religious traditions of the Norsemen, a Germanic people living in the Nordic countries. Norse paganism is therefore a subset of Germanic paganism, which was practiced in the lands inhabited by the Germanic tribes across most of Northern and Central Europe in the Viking Age...
. It flourished prior to the Christianization of Scandinavia
Christianization of Scandinavia
The Christianization of Scandinavia took place between the 8th and the 12th century. The realms of Scandinavia proper, Denmark, Norway and Sweden, established their own Archdioceses, responsible directly to the Pope, in 1104, 1154 and 1164, respectively...
, during the Early Middle Ages
Early Middle Ages
The Early Middle Ages was the period of European history lasting from the 5th century to approximately 1000. The Early Middle Ages followed the decline of the Western Roman Empire and preceded the High Middle Ages...
, and passed into Nordic folklore, with some aspects surviving to the modern day. The mythology from the Romanticist Viking revival
Viking revival
Early modern publications dealing with Old Norse culture appeared in the 16th century, e.g. Historia de gentibus septentrionalibus and the first edition of the13th century Gesta Danorum , in 1514...
came to be an influence on modern literature and popular culture
Norse mythology in popular culture
The Norse mythology, preserved in such ancient Icelandic texts as the Poetic Edda, the Prose Edda, and other lays and sagas, was little known outside Scandinavia until the 19th century. With the widespread publication of Norse myths and legends at this time, references to the Norse gods and heroes...
.

Norse mythology is the study of the myths told in Germanic countries (Germany, Sweden, Norway, Iceland, Denmark, Faroe islands) during the pre-Christian times, especially during the Viking age.
Most of the existing records on Norse mythology date from the 11th to 18th century, having gone through more than two centuries of oral preservation in what was at least officially a Pagan society.

How did the pagan Norse interact with Christianity?

What is the name of the pig that the Einherjar eat from when they arrive in Valhalla?

If in Norse mythology the j pronounced a y then why are there y's in words?

How did the Norse worship their gods?