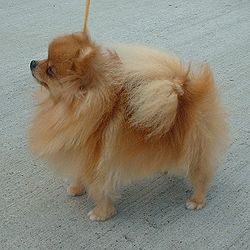 Companion dog usually describes a dog that does not work
Working dog
A working dog refers to a canine working animal, i.e., a type of dog that is not merely a pet but learns and performs tasks to assist and/or entertain its human companions, or a breed of such origin...
, providing only companionship as a pet
Pet
A pet is a household animal kept for companionship and a person's enjoyment, as opposed to wild animals or to livestock, laboratory animals, working animals or sport animals, which are kept for economic or productive reasons. The most popular pets are noted for their loyal or playful...
, rather than usefulness by doing specific tasks. Many of the toy dog
Toy dog
Toy dog traditionally refers to a very small dog or a grouping of small and very small breeds of dog. A toy dog may be of any of various dog types. Types of dogs referred to as toy dogs may include Spaniels, Pinschers and Terriers that have been bred down in size. Not all toy dogs are lapdogs,...
breeds are used only for the pleasure of their company, not as workers. Any dog can be a companion dog, and many working types such as retriever
Retriever
A retriever is a type of gun dog that retrieves game for a hunter. Generally gun-dogs are divided into three major classifications: retrievers, flushing spaniels, and pointing breeds. Retrievers were bred primarily to retrieve birds or other prey and return them to the hunter without damage...
s are enjoyed primarily for their friendly nature as a family pet, as are mixed breed dogs. The American Kennel Club also offers a Companion dog title
Companion dog title
Companion Dog refers to a title offered by the American Kennel Club for dog obedience. Other kennel clubs also offer similar CD titles...
for judged dog obedience competitions.

Some people and breed groups argue that any dog of a working dog type
Dog type
Dog types are broad categories of dogs based on function, with dogs identified primarily by specific function or style of work rather than by lineage or appearance....
is inherently a working dog, while others say that only a dog being actively worked, either in a related field such as water trials for retrievers or herding trials
Sheepdog trial
A Sheepdog trial is a competitive dog sport in which herding dog breeds move sheep around a field, fences, gates, or enclosures as directed by their handlers. Such events are particularly associated with hill farming areas, where sheep range widely on largely unfenced land...
for herding dog
Herding dog
A herding dog, also known as a stock dog or working dog, is a type of pastoral dog that either has been trained in herding or belongs to breeds developed for herding...
s, or in some other field that requires training and discipline, such as being assistance dog
Assistance dog
An assistance dog is a dog trained to aid or assist a person with a disability. Many are trained by a specific organization, while others are trained by their handler .-Classification:...
s or participating in dog agility
Dog agility
Dog agility is a dog sport in which a handler directs a dog through an obstacle course in a race for both time and accuracy. Dogs run off-leash with no food or toys as incentives, and the handler can touch neither dog nor obstacles...
, can be considered a working dog.

Dogs that have been chosen for traits that make a convenient pet are generally smaller breed
Breed
A breed is a group of domestic animals or plants with a homogeneous appearance, behavior, and other characteristics that distinguish it from other animals or plants of the same species. Despite the centrality of the idea of "breeds" to animal husbandry, there is no scientifically accepted...
s, and the tradition of keeping pretty dogs for no purpose other than to be court decorations stems back thousands of years to Chinese nobility
Chinese nobility
Chinese sovereignty and peerage, the nobility of China, were an important feature of traditional social and political organization of Imperial China. While the concepts of hereditary sovereign and peerage titles and noble families were featured as early as the semi-mythical, early historical...
. The Pekingese
Pekingese
The Pekingese, or "Peke" is an ancient breed of toy dog, originating in China. The breed was favored by the Chinese Imperial court, and its name refers to the city of Beijing where the Forbidden City resides...
and the Pug
Pug
The pug is a "toy" breed of dog with a wrinkly, short-muzzled face, and curled tail. The breed has a fine, glossy coat that comes in a variety of colors, and a compact square body with well-developed muscle. They have been described as multum in parvo , referring to the pug's personality and...
are both examples of canines chosen for their ability to be pets. In the case of the Pekingese, it was for their lion-like demeanor; for the Pugs, it was for their "lucky" wrinkles and their monkey-like .

Other dogs that appear to be strictly a decorative or entertaining toy type of dog originally had jobs, such as the Lhasa Apso's
Lhasa Apso
The Lhasa Apso is a non-sporting dog breed originating in Tibet. It was bred as an interior sentinel in the Buddhist monasteries, who alerted the monks to any intruders who entered...
job as a watch dog, or the delicate Yorkshire Terrier's
Yorkshire Terrier
The Yorkshire Terrier is a small dog breed of terrier type, developed in the 19th century in the county of Yorkshire, England to catch rats in clothing mills. The defining features of the breed are its size, to , and its silky blue and tan coat...
exceptional rat catching
Rat Catching
Rat Catching is a book by actor/filmmaker Crispin Glover. The book is a form of collage, reworked from Studies in the Art of Rat Catching, a 1896 non-fiction book now in the public domain. Pictures from the book, as well as the book itself, were shown in the opening credits of the 2003 film,...
abilities.

Companion Dog ("CD" added to dogs registered name) - is officially a "Novice obedience Title" in the AKC Competition Obedience Ring, where by a team enters the "ring" with 200 points, and needs to leave with at least 170 points to "qualify". It requires 3 "legs" (trials) under 3 different AKC judges. Any dog can earn a CD title. Levels for obedience are Companion Dog (CD), Companion Dog Excellent (CDX), Utility Dog (UD), Utility Dog Excellent (UDX), Obedience Trial Champion (OTCH), National Obedience Champion (NOC). "Pet dogs" are never "Companion Dogs" without entering a competition ring and creating a document trail. The first AKC licensed obedience trial was held in 1936, where 200 dogs were entered. People heard and liked the "phrase" "Companion Dog" and have been using it in various incorrect ways... There is even 1 group of park rangers that have their own "Companion Dog Certification", with nothing more than "their own version" of the Canine Good Citizen (CGC) test. "CD" is the minimum training level every dog should have.