Encyclopedia
The Coton de Tuléar is a small breed
Dog breed
Dog breeds are groups of closely related and visibly similar domestic dogs, which are all of the subspecies Canis lupus familiaris, having characteristic traits that are selected and maintained by humans, bred from a known foundation stock....
of dog
Dog
The domestic dog is a domesticated form of the gray wolf, a member of the Canidae family of the order Carnivora. The term is used for both feral and pet varieties. The dog may have been the first animal to be domesticated, and has been the most widely kept working, hunting, and companion animal in...
. It is named for the city of Tuléar
Toliara
-References:...
in Madagascar
Madagascar
The Republic of Madagascar is an island country located in the Indian Ocean off the southeastern coast of Africa...
and for its cotton-like coat.

Coton de Tuléar has a medium to long, fluffy, cotton-like coat
Coat (dog)
The coat of the domestic dog refers to the hair that covers its body. A dog's coat may be a double coat, made up of a soft undercoat and a coarser topcoat, or a single coat, which lacks an undercoat...
that is considered hair rather than fur. It is a non-shedding breed with low dander. Like the poodle
Poodle
The Poodle is a breed of dog. The poodle breed is found officially in toy, miniature, and standard sizes, with many coat colors. Originally bred as a type of water dog, the poodle is highly intelligent and skillful in many dog sports, including agility, obedience, tracking, and even herding...
or Havanese
Havanese
The Havanese is a dog breed of the Bichon type, developed from the now extinct Blanquito de la Habana . The Blanquito descended from the also now extinct Bichon Tenerife, which was introduced to the Canary Islands by the Cubans...
(thought to be the Coton's cousin), this breed has very low allergic affects, and are considered hypoallergenic . This breed
Breed
A breed is a group of domestic animals or plants with a homogeneous appearance, behavior, and other characteristics that distinguish it from other animals or plants of the same species. Despite the centrality of the idea of "breeds" to animal husbandry, there is no scientifically accepted...
has little to no shedding. Mats should be removed through daily brushing and combing. (see Moult
Moult
In biology, moulting or molting , also known as sloughing, shedding, or for some species, ecdysis, is the manner in which an animal routinely casts off a part of its body , either at specific times of year, or at specific points in its life cycle.Moulting can involve the epidermis , pelage...
). This breed does not have the common "doggie smell", and when properly bathed and groomed does not smell at all. The Coton de Tulear comes in three accepted colors: white (sometimes with tan markings, all white preferred by show breeders), black and white, and tricolor. These colors generally do not fade, however the tan and white may become all white.

The Fédération Cynologique Internationale
Fédération Cynologique Internationale
Fédération Cynologique Internationale is an international federation of kennel clubs based in Thuin, Belgium. The English language translation, World Canine Organisation, is not often used.Its goals are described in Article 2 of their regulations:...
standard specifies that the Coton's coat should be white but may also have tan, or "lemon", color on their ears and body, but the coat must be primarily white with no black hair. The US-based Coton de Tulear Club of America http://www.cotonclub.com allows for three different but equally favorable colorings: white, black-and-white and tri-color which includes "honeybear". White is described as nearly all white, sometimes with tan, or champagne, coloring on the ears, face or back. Black-and-white is defined as pure white with prominent black patches on the head and body (no ratio of white-to-black is specified or favored). Tri-color is described as mostly white with some brown markings and dustings of black on the body and head. A honey bear tri-color has light brown with black tips which gradually fades to off white or lemon color. The tri-color loses the most color of any of the color varieties, usually becoming mostly white with possibly some champagne markings and a dusting of black hairs on the ears and/or body. 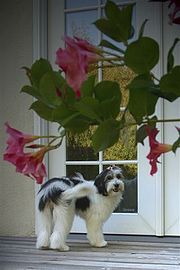 The Tall Coton shows up in all three colors, and can be born to a litter with normal sized parents that carry the appropriate genes. These long-limbed dogs are exceptionally agile and graceful.

The nose is black in colour in the Coton de Tulear Club of America standard. However, the Fédération Cynologique Internationale standard, which does favor a black nose, states that brown is tolerable as well. A pink or partly pink nose is not accepted in either standard. The lips are tight and of the same colour as the nose, specifically black in the Coton de Tulear Club of America standard. The teeth are in a scissor bite or pincer bite. The eyes are round, dark in colour and wide set. The expression should be lively, intelligent, bright, and merry. The ears are triangular and set high. The leather of the ear should be thin. The neck is strong, without a dewlap and slightly arched.

The chest is well developed and reaches below the elbows. The feet are small and arched. The back should be strong and slightly arched. The pads of the feet are usually black. The body is of moderate length and should have a moderate tuck up. The loin is muscular and not too long. The hind legs are strong and straight. The hind feet similar to the front feet. The dewclaw
Dewclaw
A dewclaw is a vestigial digit on the foot of many mammals, birds, and reptiles . It commonly grows high on the leg so that in digitigrade species, when the animal is standing, it does not make contact with the ground...
s may be removed. The tail is low set and tapering, carried over the back when in motion or excited, relaxed otherwise.

The Coton is a playful, affectionate, intelligent breed. Although generally quiet, it can become very vocal, grunting, barking and making other noises when having fun. Cotons are known to have a habit of jumping up and walking on their hind legs to please people. Most Cotons love meeting new people and are very curious in new situations. Cotons are easy to train, as they are very eager to please. Cotons are great with kids and other animals. The Coton de Tulear has a large dog personality much like the Lab
Labrador Retriever
The Labrador Retriever is one of several kinds of retriever, a type of gun dog. A breed characteristic is webbed paws for swimming, useful for the breed's original purpose of retrieving fishing nets. The Labrador is the most popular breed of dog by registered ownership in Canada, the United...
. Cotons love to swim, run, and play. They adapt well to any kind of living environment.

The Coton has a coat which requires brushing and combing almost everyday, and requires bathing several times a year. Cotons, like Poodles, do not "shed", meaning they do not drop hair on furniture, carpeting etc. But they do lose hair the same way, the texture of their coat causes the shed hair to be trapped in the coat. If not brushed and combed daily, this breed will mat up quickly and may require shaving. Cotons need a short walk every day for exercise, but will appreciate a play session as often as possible and have the endurance to go on a long hike.

The Coton is in general a healthy breed. However there are some health issues as there are in all breeds. The most serious of these would be heart problems, liver shunts, back (disc) problems or eye problems. Luckily, these are still relatively uncommon in the breed, but are becoming more so as irresponsible breeders in the US and Europe have discovered the breed.

The Coton de Tulear developed on the island of Madagascar and is still the island's national dog. The Coton's ancestors were possibly brought to Madagascar in the 16th and 17th centuries aboard pirate ships. Madagascar was a haven for pirates, and pirate graveyards can still be seen there. Pirates established a base on St. Mary's Island, Madagascar and some of them took Malagasy wives. Whether the dogs were brought along to control rats on the ships, as companions for long voyages, or were confiscated from other ships as booty no one knows. Tulear is a port now also known as Toliara
Toliara
-References:...
. The Coton is of the Bichon
Bichon
Bichon is the name for a type of related non-sporting category dog breeds. They vary in appearance, but all have tails curled over their back, a coat that is hair rather than fur that doesn't readily shed, short snouts, drop ears, and large, dark eyes. They were all bred to be amiable companion...
dog type, linked most closely to the Bichon Tenerife, and Tenerife Terrier. There have been many stories circulating about the history of the Coton in recent years. Most of them are untrue. The Coton de Tulear was never feral on Madagascar. It did not hunt wild boar or alligators, as its size, strength, and demeanor can disprove easily. It was a companion dog of the Merina (the ruling tribe) in Madagascar. It has very little prey drive, and is not a hunting dog.

The cottony coat may be the result of a single gene mutation. This small, friendly dog caught the fancy of the Malagasy royalty and they were the only people allowed to keep Cotons. When Dr. Robert Jay Russell discovered the breed in Madagascar in 1973 and brought the first ones to America, he coined the phrase the Royal Dog of Madagascar and the name stuck. They were also imported occasionally into France by returning French colonists but were not officially imported to Europe until the 1970s.