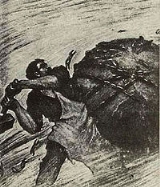 Encyclopedia
The Communist Party of Italy (Partito Comunista d’Italia, PCd'I) was a communist political party
Political party
A political party is a political organization that typically seeks to influence government policy, usually by nominating their own candidates and trying to seat them in political office. Parties participate in electoral campaigns, educational outreach or protest actions...
in Italy
Italy
Italy , officially the Italian Republic languages]] under the European Charter for Regional or Minority Languages. In each of these, Italy's official name is as follows:;;;;;;;;), is a unitary parliamentary republic in South-Central Europe. To the north it borders France, Switzerland, Austria and...
which existed from 1921 to 1926. That year it was outlawed by Benito Mussolini
Benito Mussolini
Benito Amilcare Andrea Mussolini was an Italian politician who led the National Fascist Party and is credited with being one of the key figures in the creation of Fascism....
's fascist regime. In 1943, the name was changed to the Italian Communist Party
Italian Communist Party
The Italian Communist Party was a communist political party in Italy.The PCI was founded as Communist Party of Italy on 21 January 1921 in Livorno, by seceding from the Italian Socialist Party . Amadeo Bordiga and Antonio Gramsci led the split. Outlawed during the Fascist regime, the party played...
.

The Communist Party of Italy was founded in Livorno
Livorno
Livorno , traditionally Leghorn , is a port city on the Tyrrhenian Sea on the western edge of Tuscany, Italy. It is the capital of the Province of Livorno, having a population of approximately 160,000 residents in 2009.- History :...
on 21 January 1921, following a split in the Italian Socialist Party
Italian Socialist Party
The Italian Socialist Party was a socialist and later social-democratic political party in Italy founded in Genoa in 1892.Once the dominant leftist party in Italy, it was eclipsed in status by the Italian Communist Party following World War II...
on their 17th congress. The split occurred after the socialist Congress of Livorno refused to expel the reformist group as required by the Comintern. The L'Ordine Nuovo
L'Ordine Nuovo
L'Ordine Nuovo was a weekly newspaper established in 1919 in Turin, Italy, by a group, including Antonio Gramsci, Angelo Tasca and Palmiro Togliatti, within the Italian Socialist Party. The group were admirers of the Russian Revolution and strongly supported the immediate creation of soviets in...
group in Turin
Turin
Turin is a city and major business and cultural centre in northern Italy, capital of the Piedmont region, located mainly on the left bank of the Po River and surrounded by the Alpine arch. The population of the city proper is 909,193 while the population of the urban area is estimated by Eurostat...
led by Antonio Gramsci
Antonio Gramsci
Antonio Gramsci was an Italian writer, politician, political philosopher, and linguist. He was a founding member and onetime leader of the Communist Party of Italy and was imprisoned by Benito Mussolini's Fascist regime...
and the "culturalist" current led by Angelo Tasca joined the Communist Faction in the new party. 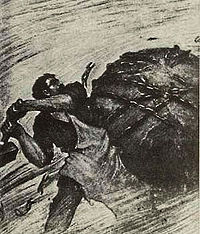 The Comintern, at that time, was structured as a single world party according to Vladimir Lenin
Vladimir Lenin
Vladimir Ilyich Lenin was a Russian Marxist revolutionary and communist politician who led the October Revolution of 1917. As leader of the Bolsheviks, he headed the Soviet state during its initial years , as it fought to establish control of Russia in the Russian Civil War and worked to create a...
's vision. Therefore, its official name was the Communist Party of Italy, Section of the Communist International. This official name remained until 1943 when Communist International was dropped, and the party simply became the Italian Communist Party (Partito Comunista Italiano, or PCI).

This change was not surprising as PCI started being used as the party's acronym around 1924–1925. This name change also reflected a change in the Comintern's role: it increasingly became a federation of national Communist parties. This trend accelerated after Lenin’s death. The Italian Communist party's new name emphasized the party's shifting from an international focus to an Italian one. At the time, it was a hotly-contested issue for the two major factions of the party. On one side, the Leninist preferred the single world party as it was internationalist
Internationalist
Internationalist may refer to:* Internationalism , a movement to increase cooperation across national borders* Internationalist, socialists opposed to World War I* The Internationalist Review, an e-journal founded in Maastricht...
and strongly centralized; on the other side, the Italians wanted a party more tailored to their nation's peculiarities and wanted more autonomy.

The PCI, being a territorial section of the Comintern, adopted the same program, the same conception of the party and the same tactics adopted by the II Congress in Moscow of 1920. The official program, drawn up in 10 points, began with the intrinsically catastrophic nature of the Capitalist System
Capitalism
Capitalism is an economic system that became dominant in the Western world following the demise of feudalism. There is no consensus on the precise definition nor on how the term should be used as a historical category...
and terminated with the extinction of the State
Sovereign state
A sovereign state, or simply, state, is a state with a defined territory on which it exercises internal and external sovereignty, a permanent population, a government, and the capacity to enter into relations with other sovereign states. It is also normally understood to be a state which is neither...
. It follows in a synthetic way the model outlined by Lenin for the Russian party.

For a while, this identity resisted, but the fast progress of the reaction in Europe produced a change of tactics in a democratic direction within the Russian party and consequently within the Comintern. This happened in particular regarding the possibility, previously opposed, of an alliance with the social democratic and bourgeois parties. This provoked a tension in the party between the majority (Left) and the minority currents (in 1924: 16% the Right and 11% the Center) supported by the Comintern. The proposals of the left were no longer accepted and the conflict became irremediable.

Since its formation, the PCI strived to organize itself on some bases which were not a mere reproduction of the traditional parties’ bases. Then it took again some arguments that distinguished the battle within the PSI: it is necessary to form an environment fiercely hostile to bourgeois society and that is an anticipation of the future socialist society. The purpose of this is not Utopian
Utopian socialism
Utopian socialism is a term used to define the first currents of modern socialist thought as exemplified by the work of Saint-Simon, Charles Fourier, and Robert Owen which inspired Karl Marx and other early socialists and were looked on favorably...
, because already in this society, especially in production, some structures are born on future results.

In two articles of 1921, this concept was developed so deeply that they assert that the vanguard party
Vanguard party
A vanguard party is a political party at the forefront of a mass action, movement, or revolution. The idea of a vanguard party has its origins in the Communist Manifesto by Karl Marx and Friedrich Engels...
is not a simple part of the proletarian class but already a structure beyond the classes, already fitted to the classless society and designed in accordance with its future duties. Revolution is not a problem of organizational shape, but of strength; revolution cannot be "done" (infantile and unrealistic goals) but led (praxis’ overthrow). From the organizational point of view, the party should abandon elective democracy, internal hierarchies, etc., and work "organically", that is like a biological organism, where the single parts or cells and different organs work together for the whole.

In the first years of the PCI, there was no official leader, but the accepted leader, first of the Faction and then of the party, was Amadeo Bordiga
Amadeo Bordiga
Amadeo Bordiga was an Italian Marxist, a contributor to Communist theory, the founder of the Communist Party of Italy, a leader of the Communist International and, after World War II, leading figure of the International Communist Party.- Early life :Bordiga was born at Resina, in the province of...
of the Left current
Left communism
Left communism is the range of communist viewpoints held by the communist left, which criticizes the political ideas of the Bolsheviks at certain periods, from a position that is asserted to be more authentically Marxist and proletarian than the views of Leninism held by the Communist International...
. Leaders of the minority currents were Angelo Tasca (Right) and Antonio Gramsci (Center).

In 1922 during its second congress, the new party registered 43,000 members. This was in part due to the entrance of almost the whole Socialist Youth Federation (Federazione Giovanile Socialista). The party adopted a slim structure headed by a Central Committee of 15 members, five of whom were in the Executive committee as well:

The national structure included provincial federations, local sections, union groups and a clandestine organization for the fight against the armed fascist groups, the Ufficio Primo. According to the report of the Central Committee to the second congress, during the polls in the Unions (Camera del Lavoro
Camera del Lavoro
Camera del Lavoro were centers for Italian Syndicalist labor unions, modeled on the French Bourse du Travail, which flourished from 1895 to the rise of Fascism in the 1920s....
) the communist motions received 600,000 votes.

In 1923, some members of the party were arrested and put on trial for "conspiracy against the State". This allowed the intense activity of the Communist International to deprive the party's left wing of authority and give control of the party to the minority center which had aligned with the position of Moscow.

In 1924-25, the Comintern began the campaign of "Bolshevization" which forced every party to conform itself to the discipline and orders of Moscow. In May 1924, during the clandestine conference in Como
Como
Como is a city and comune in Lombardy, Italy.It is the administrative capital of the Province of Como....
held to ratify the party leadership. of the 45 secretaries of sections, 35 more the Youth Federation’s one vote for Bordiga’s Left, 4 for Gramsci’s Centre and 5 for Tasca’s Right.

In 1926, before the Llyon Congress, the Center won almost all the votes due to the absence of most of the members of the Left delegates who were unable to attend because of the fascist controls and the lack of support of the Comintern (clandestine movements). A recourse to the Comintern against the evident maneuver had no effect.

The PCd’I, as conceived by the Sinistra Comunista (Communist Left), terminated. The organization continued with the support of the Communist International and a new structure and a new leading group. In 1922, the newspaper L'Ordine Nuovo
L'Ordine Nuovo
L'Ordine Nuovo was a weekly newspaper established in 1919 in Turin, Italy, by a group, including Antonio Gramsci, Angelo Tasca and Palmiro Togliatti, within the Italian Socialist Party. The group were admirers of the Russian Revolution and strongly supported the immediate creation of soviets in...
was closed, and in 1924 the new central newspaper L'Unità, directed by Gramsci, was started. The Communist Left continued as a fraction principally functioning in exile. It published the newspaper Bilan, the Monthly Theoretical Bulletin of the Italian Fraction of the Communist left.

In 1926, Bordiga and Gramsci were arrested and imprisoned on the island of Ustica
Ustica
Ustica is the name of a small island, about 9 km across, situated 52 km north of Capo Gallo, Italy in the Tyrrhenian Sea...
. In 1927, Palmiro Togliatti
Palmiro Togliatti
Palmiro Togliatti was an Italian politician and leader of the Italian Communist Party from 1927 until his death.-Early life:...
was elected secretary in the place of Gramsci, who was imprisoned. In 1930, Bordiga was expelled from the CI, accused of “Trotskyism
Trotskyism
Trotskyism is the theory of Marxism as advocated by Leon Trotsky. Trotsky considered himself an orthodox Marxist and Bolshevik-Leninist, arguing for the establishment of a vanguard party of the working-class...
”.

In 1943, Stalin dissolved the Communist International, and the exiled members of the PCd’I in Moscow on 15 May changed the party's name to Italian Communist Party (Partito Comunista Italiano, PCI). With this name, it reorganized in Italy and after the fall of Fascism became a parliamentary party.