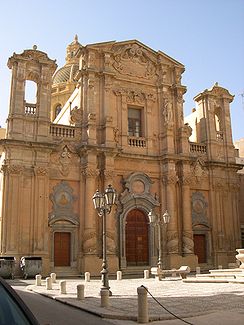 Marsala is a seaport city located in the Province of Trapani
Province of Trapani
Trapani is a province in the autonomous island region of Sicily in Italy. Its capital is the city of Trapani.It has an area of 2,460 km², and a total population of 425,121...
on the island of Sicily
Sicily
Sicily is a region of Italy, and is the largest island in the Mediterranean Sea. Along with the surrounding minor islands, it constitutes an autonomous region of Italy, the Regione Autonoma Siciliana Sicily has a rich and unique culture, especially with regard to the arts, music, literature,...
in Italy
Italy
Italy , officially the Italian Republic languages]] under the European Charter for Regional or Minority Languages. In each of these, Italy's official name is as follows:;;;;;;;;), is a unitary parliamentary republic in South-Central Europe. To the north it borders France, Switzerland, Austria and...
. The low coast on which it is situated is the westernmost point of the island. It is best known as the source of Marsala wine.

Marsala occupies the site of Lilybaeum, the principal stronghold of the Carthaginians
Carthage
Carthage , implying it was a 'new Tyre') is a major urban centre that has existed for nearly 3,000 years on the Gulf of Tunis, developing from a Phoenician colony of the 1st millennium BC...
in Sicily, founded by Himilco
Himilco
Himilco was the Carthaginian sailor a.k.a. Himilco the Navigator.Himilco may also refer to:* Himilco , Carthaginian soldier at Battle of Messene...
in 396 BC after the abandonment of Motya
Motya
Motya , was an ancient and powerful city on an island off the west coast of Sicily, between Drepanum and Lilybaeum...
. Neither Pyrrhus
Pyrrhus of Epirus
Pyrrhus or Pyrrhos was a Greek general and statesman of the Hellenistic era. He was king of the Greek tribe of Molossians, of the royal Aeacid house , and later he became king of Epirus and Macedon . He was one of the strongest opponents of early Rome...
nor the Romans were able to reduce it by siege, but it was surrendered to the latter in 241 BC at the end of the First Punic War
First Punic War
The First Punic War was the first of three wars fought between Ancient Carthage and the Roman Republic. For 23 years, the two powers struggled for supremacy in the western Mediterranean Sea, primarily on the Mediterranean island of Sicily and its surrounding waters but also to a lesser extent in...
as a condition of the peace treaty
Peace treaty
A peace treaty is an agreement between two or more hostile parties, usually countries or governments, that formally ends a state of war between the parties...
. In the later wars it was a starting point for the Roman expeditions against Carthage, and under Roman rule it enjoyed considerable prosperity. It obtained municipal rights from Augustus
Augustus
Augustus ;23 September 63 BC – 19 August AD 14) is considered the first emperor of the Roman Empire, which he ruled alone from 27 BC until his death in 14 AD.The dates of his rule are contemporary dates; Augustus lived under two calendars, the Roman Republican until 45 BC, and the Julian...
and became a colony under either Pertinax
Pertinax
Pertinax , was Roman Emperor for three months in 193. He is known as the first emperor of the tumultuous Year of the Five Emperors. A high ranking military and Senatorial figure, he tried to restore discipline in the Praetorian Guards, whereupon they rebelled and killed him...
or Septimius Severus
Septimius Severus
Septimius Severus , also known as Severus, was Roman Emperor from 193 to 211. Severus was born in Leptis Magna in the province of Africa. As a young man he advanced through the customary succession of offices under the reigns of Marcus Aurelius and Commodus. Severus seized power after the death of...
.

The Arabs gave it its present name "Marsala," which perhaps is derived from the Arab "Marsa Allah" (port of Allah
Allah
Allah is a word for God used in the context of Islam. In Arabic, the word means simply "God". It is used primarily by Muslims and Bahá'ís, and often, albeit not exclusively, used by Arabic-speaking Eastern Catholic Christians, Maltese Roman Catholics, Eastern Orthodox Christians, Mizrahi Jews and...
) or, more probably, from "Marsa ‘Alī" ("port of Ali
Ali
' |Ramaḍān]], 40 AH; approximately October 23, 598 or 600 or March 17, 599 – January 27, 661).His father's name was Abu Talib. Ali was also the cousin and son-in-law of the Islamic prophet Muhammad, and ruled over the Islamic Caliphate from 656 to 661, and was the first male convert to Islam...
", or "Marsa ‘āliyy", "great port"). The huge ancient harbor that lay on the northeast was destroyed by Charles V
Charles V, Holy Roman Emperor
Charles V was ruler of the Holy Roman Empire from 1519 and, as Charles I, of the Spanish Empire from 1516 until his voluntary retirement and abdication in favor of his younger brother Ferdinand I and his son Philip II in 1556.As...
in the 16th century, to prevent its occupation by pirates. The modern harbor lies to the southeast.

The town is situated on the Mediterranean coast
Mediterranean Sea
The Mediterranean Sea is a sea connected to the Atlantic Ocean surrounded by the Mediterranean region and almost completely enclosed by land: on the north by Anatolia and Europe, on the south by North Africa, and on the east by the Levant...
, in the south-western side of Sicily
Sicily
Sicily is a region of Italy, and is the largest island in the Mediterranean Sea. Along with the surrounding minor islands, it constitutes an autonomous region of Italy, the Regione Autonoma Siciliana Sicily has a rich and unique culture, especially with regard to the arts, music, literature,...
. It lies on the road between Trapani
Trapani
Trapani is a city and comune on the west coast of Sicily in Italy. It is the capital of the Province of Trapani. Founded by Elymians, the city is still an important fishing port and the main gateway to the nearby Egadi Islands.-History:...
and Mazara del Vallo
Mazara del Vallo
Mazara del Vallo is a town and comune in southwestern Sicily, Italy, which lies mainly on the left bank at the mouth of the Mazaro river, administratively part of the province of Trapani....
.

Little remains of the ancient Lilybaeum. Fragments of the city walls, squared stones, and some foundations of buildings between the walls and the sea are visible. The so-called grotto and spring of the Sibyl is located under the church of San Giovanni Battista (1555), and is traditionally considered the tomb of the Cuman or Siculian Sibyl.

To the east of the town is a great fosse which defended it on the land side, and beyond this again are quarries like those of Syracuse
Syracuse, Italy
Syracuse is a historic city in Sicily, the capital of the province of Syracuse. The city is notable for its rich Greek history, culture, amphitheatres, architecture, and as the birthplace of the preeminent mathematician and engineer Archimedes. This 2,700-year-old city played a key role in...
on a small scale.

The modern town takes the shape of the Roman camp within the earlier city, one of the gates of which still existed in 1887. Sights include the campanile and convent of the Annunziata, and the Baroque Church of the Purgatory.