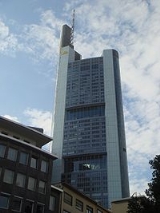 Encyclopedia
Commerzbank Tower, located in the city centre of Frankfurt
Frankfurt
Frankfurt am Main , commonly known simply as Frankfurt, is the largest city in the German state of Hesse and the fifth-largest city in Germany, with a 2010 population of 688,249. The urban area had an estimated population of 2,300,000 in 2010...
, Germany
Germany
Germany , officially the Federal Republic of Germany , is a federal parliamentary republic in Europe. The country consists of 16 states while the capital and largest city is Berlin. Germany covers an area of 357,021 km2 and has a largely temperate seasonal climate...
, is the tallest completed skyscraper in the European Union
European Union
The European Union is an economic and political union of 27 independent member states which are located primarily in Europe. The EU traces its origins from the European Coal and Steel Community and the European Economic Community , formed by six countries in 1958...
. After it was completed in 1997 it ranked as the tallest skyscraper in Europe until 2005 when it was surpassed by the Triumph-Palace
Triumph-Palace
Triumph-Palace is the name of an apartment building in Moscow. It is sometimes called the Eighth Sister because it is similar in appearance to the Seven Sisters skyscrapers built in Moscow by Joseph Stalin through the 1950s...
in Moscow
Moscow
Moscow is the capital, the most populous city, and the most populous federal subject of Russia. The city is a major political, economic, cultural, scientific, religious, financial, educational, and transportation centre of Russia and the continent...
. It will be surpassed upon the completion of Shard London Bridge
Shard London Bridge
Shard London Bridge is a skyscraper under construction in Southwark, London. When completed in May 2012, it will be the tallest building in the European Union and the 45th-tallest building in the world, standing tall...
in London
London
London is the capital city of :England and the :United Kingdom, the largest metropolitan area in the United Kingdom, and the largest urban zone in the European Union by most measures. Located on the River Thames, London has been a major settlement for two millennia, its history going back to its...
, United Kingdom
United Kingdom
The United Kingdom of Great Britain and Northern IrelandIn the United Kingdom and Dependencies, other languages have been officially recognised as legitimate autochthonous languages under the European Charter for Regional or Minority Languages...
in 2012.
The tower is only two metres taller than the MesseTurm
Messeturm
The Messeturm is a skyscraper in Frankfurt am Main, Germany. Its name translates as "Fair Tower" in German. It is the second tallest building in Frankfurt, the second tallest building in Germany. The Messeturm's ground floor area is just . The Messeturm is directly located in the Frankfurt Trade...
which is also located in Frankfurt. The MesseTurm was the tallest building in Europe before the construction of the Commerzbank Tower.

With a height of 259 metres (850 ft), 56 stories, it provides 121,000 m² (1.3 million square feet) of office space for the Commerzbank
Commerzbank
Commerzbank AG is the second-largest bank in Germany, after Deutsche Bank, headquartered in Frankfurt am Main.-Activities:Commerzbank is mainly active in commercial bank, retail banking and mortgaging. It suffered reversals in investment banking in early 2000s and scaled back its Securities unit...
headquarters, including winter gardens and natural lighting and air circulation. The signal light on top of the tower gives the tower a total height of 300.1 metres (985 ft).

In its immediate neighbourhood are other high-rise buildings including the Eurotower
Eurotower (Frankfurt)
The Eurotower is a skyscraper located in the Bankenviertel of Frankfurt, Germany.The tower is tall, with 40 floors and 78.000 m² of office space...
(home of the European Central Bank
European Central Bank
The European Central Bank is the institution of the European Union that administers the monetary policy of the 17 EU Eurozone member states. It is thus one of the world's most important central banks. The bank was established by the Treaty of Amsterdam in 1998, and is headquartered in Frankfurt,...
), the Maintower
Maintower
Maintower is a 200 metre skyscraper in Frankfurt am Main, Germany. It is named after the river Main. A 40 metre communications tower is mounted atop the building. It features five underground floors, as well as two public viewing platforms. The tower currently remains the only skyscraper in...
, the Silver Tower, the Japan Center and the Gallileo skyscraper. The area is commonly known as Bankenviertel
Bankenviertel (Frankfurt am Main)
The Bankenviertel is an area in the city centre of Frankfurt, Germany.It is not an official city district but it is a commonly used designation to describe the not exactly defined area where most of Germanys major banks have their headquarters and where many foreign banks have their representation...
(banking district or financial district).

The building is illuminated at night by a yellow light scheme which was designed by Thomas Ende who was allowed to display this sequence as a result of a competition.

The Commerzbank Tower is shaped as a 60 metres (197 ft) wide rounded equilateral triangle with a central, triangular atrium. At nine different levels, the atrium opens up to one of the three sides, forming large sky gardens. These open areas allow more natural light in the building, reducing the need for artificial lighting. At the same time it ensures offices in the building's two other sides have a view of either the city or the garden.

In order to eliminate the need of supporting columns in the sky gardens, the building was constructed in steel instead of the conventional (and cheaper) concrete. It was the first skyscraper in Germany where steel was used as the main construction material.