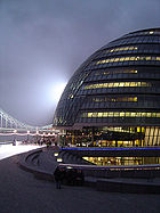 Encyclopedia
Foster + Partners is an architectural firm
Architectural firm
An architectural firm is a company which employs one or more licensed architects and practices the profession of architecture.- History :Architects have existed since early in recorded history. The earliest recorded architects include Imhotep and Senemut . No writings exist to describe how these...
based in London
London
London is the capital city of :England and the :United Kingdom, the largest metropolitan area in the United Kingdom, and the largest urban zone in the European Union by most measures. Located on the River Thames, London has been a major settlement for two millennia, its history going back to its...
. The practice is led by its founder and Chairman, Norman Foster
Norman Foster, Baron Foster of Thames Bank
Norman Robert Foster, Baron Foster of Thames Bank, OM is a British architect whose company maintains an international design practice, Foster + Partners....
, and has constructed many high-profile glass
Glass
Glass is an amorphous solid material. Glasses are typically brittle and optically transparent.The most familiar type of glass, used for centuries in windows and drinking vessels, is soda-lime glass, composed of about 75% silica plus Na2O, CaO, and several minor additives...
-and-steel
Steel
Steel is an alloy that consists mostly of iron and has a carbon content between 0.2% and 2.1% by weight, depending on the grade. Carbon is the most common alloying material for iron, but various other alloying elements are used, such as manganese, chromium, vanadium, and tungsten...
buildings.

Established by Norman Foster as Foster Associates in 1967 shortly after leaving Team 4
Team 4
Team 4 was a British architectural firm, established in 1963 by architects Su Brumwell, Wendy Cheeseman, Norman Foster and Richard Rogers. At the time Rogers and Brumwell were both married, as were Foster and Cheeseman...
, the firm was renamed in the 1990s to more accurately reflect the influence of the other lead architects.

In June 2008, The Guardian
The Guardian
The Guardian, formerly known as The Manchester Guardian , is a British national daily newspaper in the Berliner format...
published an article highly critical of planned real estate development in a pristine seacoast area in Bulgaria
Bulgaria
Bulgaria , officially the Republic of Bulgaria , is a parliamentary democracy within a unitary constitutional republic in Southeast Europe. The country borders Romania to the north, Serbia and Macedonia to the west, Greece and Turkey to the south, as well as the Black Sea to the east...
which is currently under EU environmental protection
Natura 2000
Natura 2000 is an ecological network of protected areas in the territory of the European Union.-Origins:In May 1992, the governments of the European Communities adopted legislation designed to protect the most seriously threatened habitats and species across Europe. This legislation is called the...
. The paper cited environmentalists' concerns over the impact of the planned 15,000 inhabitant resort facilities. The Bulgarian partner, Georgi Stanishev, is the brother of Sergei Stanishev, Leader of Bulgarian Socialist Party, Prime Minister of Bulgaria between 17 August 2005 and 27 July 2009 Sergei Stanishev.