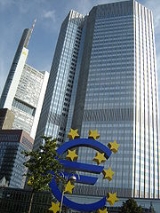 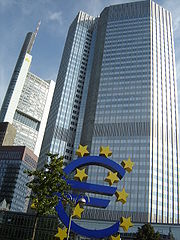 The Eurotower is a skyscraper located in the Bankenviertel
Bankenviertel (Frankfurt am Main)
The Bankenviertel is an area in the city centre of Frankfurt, Germany.It is not an official city district but it is a commonly used designation to describe the not exactly defined area where most of Germanys major banks have their headquarters and where many foreign banks have their representation...
(financial district) of Frankfurt
Frankfurt
Frankfurt am Main , commonly known simply as Frankfurt, is the largest city in the German state of Hesse and the fifth-largest city in Germany, with a 2010 population of 688,249. The urban area had an estimated population of 2,300,000 in 2010...
, Germany
Germany
Germany , officially the Federal Republic of Germany , is a federal parliamentary republic in Europe. The country consists of 16 states while the capital and largest city is Berlin. Germany covers an area of 357,021 km2 and has a largely temperate seasonal climate...
.

The building is located at Willy-Brandt-Platz in the city center vis-à-vis to the Opern- und Schauspielhaus Frankfurt. There is an Euro Information Center of the ECB on the first floor open to the public and a club/restaurant called Living XXL in the basement. There is an underground U-Bahn station
Frankfurt U-Bahn
The Frankfurt U-Bahn, together with the Frankfurt S-Bahn and the Frankfurt Straßenbahn, is the backbone of the public transport system of Frankfurt, Germany. Its name derives from the German term for underground, Untergrundbahn. The U-Bahn opened in 1968 and now consists of 87 stations on nine...
and an aboveground tram station (Willy-Brandt-Platz) right next to the Eurotower.

The personnel of the ECB are also distributed to two other skyscrapers in the financial district, the old Commerzbank Tower
Commerzbank Tower
Commerzbank Tower, located in the city centre of Frankfurt, Germany, is the tallest completed skyscraper in the European Union. After it was completed in 1997 it ranked as the tallest skyscraper in Europe until 2005 when it was surpassed by the Triumph-Palace in Moscow...
and the Eurotheum
Eurotheum
The Eurotheum is a skyscraper in the city center of Frankfurt. It was built to coincide with the neighbouring Maintower and was completed in 1999....
, because of limited space in the Eurotower. The ECB plans to build a new headquarters in the eastern part of Frankfurt to bring together all personnel in one place. Construction of the new tower started in 2008 with a completion date for 2014.