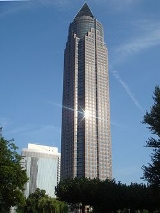 Encyclopedia
The Messeturm is a skyscraper
Skyscraper
A skyscraper is a tall, continuously habitable building of many stories, often designed for office and commercial use. There is no official definition or height above which a building may be classified as a skyscraper...
in Frankfurt am Main, Germany
Germany
Germany , officially the Federal Republic of Germany , is a federal parliamentary republic in Europe. The country consists of 16 states while the capital and largest city is Berlin. Germany covers an area of 357,021 km2 and has a largely temperate seasonal climate...
. Its name translates as "Fair Tower" ("fair" in the sense of "trade fair") in German
German language
German is a West Germanic language, related to and classified alongside English and Dutch. With an estimated 90 – 98 million native speakers, German is one of the world's major languages and is the most widely-spoken first language in the European Union....
. It is the second tallest building in Frankfurt
Frankfurt
Frankfurt am Main , commonly known simply as Frankfurt, is the largest city in the German state of Hesse and the fifth-largest city in Germany, with a 2010 population of 688,249. The urban area had an estimated population of 2,300,000 in 2010...
, the second tallest building in Germany. The Messeturm's ground floor area is just 1681 m² (18,094.1 sq ft). The Messeturm is directly located in the Frankfurt Trade Fair
Frankfurt Trade Fair
Frankfurt Trade Fair , with 448,000,000 Euros in sales and over 1,600 active employees, is one of the world's largest trade fair companies. The group has a global network of 28 subsidiaries, five branch offices, and 52 international sales partners. Thus, the Messe Frankfurt is present in over 150...
grounds. Helmut Jahn
Helmut Jahn
Helmut Jahn is a German-American architect, well known for designs such as the US$800 million Sony Center on the Potsdamer Platz, Berlin, the Messeturm in Frankfurt and the One Liberty Place, formerly the tallest building in Philadelphia, Pennsylvania, and Suvarnabhumi Airport, an international...
designed the Messeturm in the Postmodern architectural
Postmodern architecture
Postmodern architecture began as an international style the first examples of which are generally cited as being from the 1950s, but did not become a movement until the late 1970s and continues to influence present-day architecture...
style.

The construction of the building's foundation set a world record for the longest continuous concrete pour. Ninety trucks poured concrete for 78 hours into the 6 metres (19.7 ft) deep foundation.

The 36.3 metres (119.1 ft) high pyramid on the very top of the Messeturm is what makes it most remarkable among other usual skyscrapers.

The tower uses numerous geometric shapes in its design such as the square footprint which is the main shape used throughout the tower. It then rises to a cylindrical shape which finally completes in a pyramid.

It is one of the few buildings in Germany with their own postal code
Postal code
A postal code is a series of letters and/or digits appended to a postal address for the purpose of sorting mail. Once postal codes were introduced, other applications became possible.In February 2005, 117 of the 190 member countries of the Universal Postal Union had postal code systems...
(60308), the others being Opernturm
Opernturm
The OpernTurm is a skyscraper in Frankfurt, Germany. The property is situated opposite Alte Oper on the corner of Bockenheimer Landstrasse and Bockenheimer Anlage. The building was designed by Christoph Mäckler. The project developer was Tishman Speyer, a US firm that previously built the Sony...
, another Frankfurt skyscraper, and the summit station on Zugspitze
Zugspitze
The Zugspitze, at 2,962 metres above sea level, is the highest peak of the Wetterstein Mountains as well as the highest mountain in Germany. It lies south of the town of Garmisch-Partenkirchen, and the border between Germany and Austria runs over its western summit. South of the mountain is...
.

There are 900 parking places in a public parking garage and a direct connection to the subway.

The building also appears in the European tileset for the game SimCity 4
SimCity 4
SimCity 4 is a city-building/urban planning simulation computer game developed by Maxis, a subsidiary of Electronic Arts. It was released on January 14, 2003. It is the fourth installment in the SimCity series. SimCity 4 has a single expansion pack called Rush Hour which adds features to the game...
, and a similar-looking building appears in SimCity 3000
SimCity 3000
SimCity 3000 is a city building simulation personal computer game and the third major installment in the SimCity series. It was published by Electronic Arts and developed by series creator Maxis, a wholly owned subsidiary of EA...
.