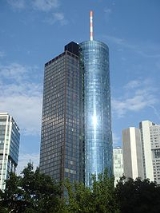 Encyclopedia
Maintower is a 200 metre (656 foot) skyscraper in Frankfurt am Main, Germany. It is named after the river Main. A 40 metre (131 foot) communications
Telecommunication
Telecommunication is the transmission of information over significant distances to communicate. In earlier times, telecommunications involved the use of visual signals, such as beacons, smoke signals, semaphore telegraphs, signal flags, and optical heliographs, or audio messages via coded...
tower is mounted atop the building. It features five underground floors, as well as two public viewing platforms. The tower currently remains the only skyscraper in Frankfurt with a public viewing observatory. It is currently the 4th tallest building in Frankfurt.

Maintower was built between 1996 and 1999 and contains the Landesbank of Hesse
Hesse
Hesse or Hessia is both a cultural region of Germany and the name of an individual German state.* The cultural region of Hesse includes both the State of Hesse and the area known as Rhenish Hesse in the neighbouring Rhineland-Palatinate state...
and Thuringia
Thuringia
The Free State of Thuringia is a state of Germany, located in the central part of the country.It has an area of and 2.29 million inhabitants, making it the sixth smallest by area and the fifth smallest by population of Germany's sixteen states....
(Helaba
Helaba
Helaba short for Hessische Landesbank Landesbank Hessen-Thüringen is a commercial bank with core regions in Hesse and Thuringia, Germany...
), the German Office of Merrill Lynch
Merrill Lynch
Merrill Lynch is the wealth management division of Bank of America. With over 15,000 financial advisors and $2.2 trillion in client assets it is the world's largest brokerage. Formerly known as Merrill Lynch & Co., Inc., prior to 2009 the firm was publicly owned and traded on the New York...
and a television studio of the Hessischer Rundfunk
Hessischer Rundfunk
Hessischer Rundfunk is the public broadcaster for the German state of Hesse. The main offices of HR are in Frankfurt am Main. HR is a member of the ARD.- Studios :...
, among other enterprises. The first tenants moved in on 5 November 1999, and the official inauguration was 28 January 2000. During weather reports by the television station, the weather reporter stands on the top of the building.

The foyer of the building has two art pieces accessible to the public: the video installation by Bill Viola
Bill Viola
Bill Viola is a contemporary video artist. He is considered a leading figure in the generation of artists whose artistic expression depends upon electronic, sound, and image technology in New Media...
"The World of Appearances" and the wall mosaic
Mosaic
Mosaic is the art of creating images with an assemblage of small pieces of colored glass, stone, or other materials. It may be a technique of decorative art, an aspect of interior decoration, or of cultural and spiritual significance as in a cathedral...
by Stephan Huber
Stephan Huber
Stephan Huber is a German sculptor an object artist.-Life:After his studies at the Academy of Fine Arts, Munich , Huber received a grant for the P.S.1 studio programme in New York...
"Frankfurter Treppe / XX. Jahrhundert" (Translation: "Frankfurt's Steps/20th century")

The tower's design features what appears to be two connected towers. The smaller of the two is of a cuboid shape and a design common to 1970s architecture. The second and taller of the two towers is a circular tower with an entire blue glass exterior which features the transmission tower on top.