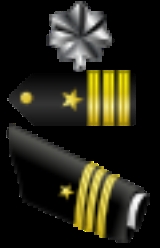 A commander in the U.S. Navy may command a frigate
Frigate
A frigate is any of several types of warship, the term having been used for ships of various sizes and roles over the last few centuries.In the 17th century, the term was used for any warship built for speed and maneuverability, the description often used being "frigate-built"...
, destroyer
Destroyer
In naval terminology, a destroyer is a fast and maneuverable yet long-endurance warship intended to escort larger vessels in a fleet, convoy or battle group and defend them against smaller, powerful, short-range attackers. Destroyers, originally called torpedo-boat destroyers in 1892, evolved from...
, submarine
Submarine
A submarine is a watercraft capable of independent operation below the surface of the water. It differs from a submersible, which has more limited underwater capability...
, aviation squadron or small shore activity, or may serve on a staff (typically as executive officer) or as executive officer of a larger vessel. An officer in the rank of commander who commands a vessel may also be referred to as "captain" as a courtesy title, or informally referred to as "skipper".

Historically, the rank of "commander" was originally called "Master Commandant
Master Commandant
Master commandant was a rank within the early United States Navy. The rank of master commandant was slightly higher than lieutenant, and a master commandant would often command warships too small to justify the command of a full captain. In the United States Navy, the rank was shortened to...
" in the U.S. Navy. This rank corresponded in function to "Master and Commander" in the Royal Navy
Royal Navy
The Royal Navy is the naval warfare service branch of the British Armed Forces. Founded in the 16th century, it is the oldest service branch and is known as the Senior Service...
. It was later changed in 1838 to its modern form.

The Los Angeles
Los Ángeles
Los Ángeles is the capital of the province of Biobío, in the commune of the same name, in Region VIII , in the center-south of Chile. It is located between the Laja and Biobío rivers. The population is 123,445 inhabitants...
Police Department
Los Angeles Police Department
The Los Angeles Police Department is the police department of the city of Los Angeles, California. With just under 10,000 officers and more than 3,000 civilian staff, covering an area of with a population of more than 4.1 million people, it is the third largest local law enforcement agency in...
was one of first American police departments to use this rank. A commander in the LAPD is equivalent to an Inspector
Inspector
Inspector is both a police rank and an administrative position, both used in a number of contexts. However, it is not an equivalent rank in each police force.- Australia :...
in other US departments (such as the NYPD); the LAPD rank was originally called Inspector as well, but was changed in 1974 to Commander after senior officers voiced a preference for the more military
Military
A military is an organization authorized by its greater society to use lethal force, usually including use of weapons, in defending its country by combating actual or perceived threats. The military may have additional functions of use to its greater society, such as advancing a political agenda e.g...
-sounding rank.

The Rochester, New York
Rochester, New York
Rochester is a city in Monroe County, New York, south of Lake Ontario in the United States. Known as The World's Image Centre, it was also once known as The Flour City, and more recently as The Flower City...
Police Department (RPD) uses the rank of commander. Higher than Captain and below Deputy Chief, the rank is achieved by appointment. Commander is the rank held by the two patrol division heads and other Commanders fill various administrative roles. The St. Paul Police Department (MN) is another police force that uses the rank of commander. In the St. Paul Police department, commanders serve as the chief of the district/unit that they oversee.

Many police departments in the Midwest use the rank of commander. It is equivalent to a lieutenant in most other departments, being above a sergeant and below a deputy chief or captain.

A group
Group (air force)
A group is a military aviation unit, a component of military organization and a military formation. Usage of the terms group and wing differ from one country to another, as well as different branches of a defence force, in some cases...
commander is typically a mid-grade colonel
Colonel (United States)
In the United States Army, Air Force, and Marine Corps, colonel is a senior field grade military officer rank just above the rank of lieutenant colonel and just below the rank of brigadier general...
, while a wing
Wing (air force unit)
Wing is a term used by different military aviation forces for a unit of command. The terms wing, group or Staffel are used for different-sized units from one country or service to another....
commander is typically a senior colonel or a brigadier general
Brigadier general (United States)
A brigadier general in the United States Army, Air Force, and Marine Corps, is a one-star general officer, with the pay grade of O-7. Brigadier general ranks above a colonel and below major general. Brigadier general is equivalent to the rank of rear admiral in the other uniformed...
.

Commander is also used as a title in certain circumstances, such as the commander of a squad of detectives, who would usually be of the rank of lieutenant.