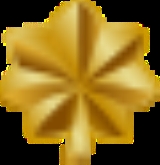 The pay grade for the rank of major is O-4. The insignia for the rank consists of a golden oak leaf, with slight stylized differences between the Army/Air Force version and the Marine Corps version.

A major in the U.S. Army typically serves as a battalion
Battalion
A battalion is a military unit of around 300–1,200 soldiers usually consisting of between two and seven companies and typically commanded by either a Lieutenant Colonel or a Colonel...
executive officer
Executive officer
An executive officer is generally a person responsible for running an organization, although the exact nature of the role varies depending on the organization.-Administrative law:...
(XO) or as the battalion operations officer (S3). A major can also serve as a primary staff officer for a regiment
Regiment
A regiment is a major tactical military unit, composed of variable numbers of batteries, squadrons or battalions, commanded by a colonel or lieutenant colonel...
, brigade
Brigade
A brigade is a major tactical military formation that is typically composed of two to five battalions, plus supporting elements depending on the era and nationality of a given army and could be perceived as an enlarged/reinforced regiment...
or task force
Task force
A task force is a unit or formation established to work on a single defined task or activity. Originally introduced by the United States Navy, the term has now caught on for general usage and is a standard part of NATO terminology...
in the areas concerning personnel, logistical and operations. A major will also be a staff officer / action officer on higher staffs and headquarters. In addition, majors command augmented companies in Combat Service and Service Support units. U.S. Army majors also command Special Operations
Special operations
Special operations are military operations that are considered "special" .Special operations are typically performed independently or in conjunction with conventional military operations. The primary goal is to achieve a political or military objective where a conventional force requirement does...
companies, such as U.S. Army Special Forces companies, Civil Affairs companies, Military Information Support Operations companies, some Aviation companies, as well as certain types of separate, numbered vice lettered, Military Intelligence companies.

While Union officers continued to wear their rank insignia on their shoulder straps, Confederate officers wore their rank insignia on the collar (one, two, or three horizontal gold bars for lieutenants and captains; one, two, or three gold stars for field grade officers; and three gold stars surrounded by a wreath for all general officers), as well as rows of gold lace forming an Austrian knot
Austrian knot
An Austrian Knot is an elaborate design of twisted cord or lace worn as part of a dress uniform, usually on the lower sleeve. It is usually a distinction worn by officers; the major exception is the hussars, in which Austrian knots are worn by all ranks...
pattern on each sleeve. The number of rows of gold lace increased with the rank of the officer.

A major in the Air Force typically has duties as a senior staff officer at the squadron level. In flying squadrons majors are generally flight commanders or assistant directors of operations. In the mission support and maintenance groups majors may occasionally be squadron commanders. In the medical corps, a major may be the head of a clinic or flight.