Encyclopedia
Coluber constrictor is a species
Species
In biology, a species is one of the basic units of biological classification and a taxonomic rank. A species is often defined as a group of organisms capable of interbreeding and producing fertile offspring. While in many cases this definition is adequate, more precise or differing measures are...
of nonvenomous
Venomous snake
"Poisonous snake" redirects here. For true poisonous snakes, see Rhabdophis.Venomous snakes are snakes which have venom glands and specialized teeth for the injection of venom...
, colubrid
Colubrid
A colubrid is a member of the snake family Colubridae. This broad classification of snakes includes about two-thirds of all snake species on earth. The earliest species of the snake family date back to the Oligocene epoch. With 304 genera and 1,938 species, Colubridae is the largest snake family...
snake
Snake
Snakes are elongate, legless, carnivorous reptiles of the suborder Serpentes that can be distinguished from legless lizards by their lack of eyelids and external ears. Like all squamates, snakes are ectothermic, amniote vertebrates covered in overlapping scales...
s commonly referred to as the eastern racers. They are primarily found throughout the United States
United States
The United States of America is a federal constitutional republic comprising fifty states and a federal district...
, east of the Rocky Mountains
Rocky Mountains
The Rocky Mountains are a major mountain range in western North America. The Rocky Mountains stretch more than from the northernmost part of British Columbia, in western Canada, to New Mexico, in the southwestern United States...
, but they range north into Canada
Canada
Canada is a North American country consisting of ten provinces and three territories. Located in the northern part of the continent, it extends from the Atlantic Ocean in the east to the Pacific Ocean in the west, and northward into the Arctic Ocean...
, and south into Mexico
Mexico
The United Mexican States , commonly known as Mexico , is a federal constitutional republic in North America. It is bordered on the north by the United States; on the south and west by the Pacific Ocean; on the southeast by Guatemala, Belize, and the Caribbean Sea; and on the east by the Gulf of...
, Guatemala
Guatemala
Guatemala is a country in Central America bordered by Mexico to the north and west, the Pacific Ocean to the southwest, Belize to the northeast, the Caribbean to the east, and Honduras and El Salvador to the southeast...
and Belize
Belize
Belize is a constitutional monarchy and the northernmost country in Central America. Belize has a diverse society, comprising many cultures and languages. Even though Kriol and Spanish are spoken among the population, Belize is the only country in Central America where English is the official...
. There are currently 11 recognized subspecies
Subspecies
Subspecies in biological classification, is either a taxonomic rank subordinate to species, ora taxonomic unit in that rank . A subspecies cannot be recognized in isolation: a species will either be recognized as having no subspecies at all or two or more, never just one...
.

Racers typically grow to around 3½ feet (107 cm) long, but some subspecies are capable of attaining lengths of 6 feet (1.8 m). Their patterns vary widely between subspecies. Most are solid colored as their common names imply, black racers, brown racers, blue racers or green racers. Runner is sometimes used instead of racer in their common name. All subspecies have a lighter colored underbelly: white, a light tan or yellow in color. Juveniles are more strikingly patterned, with a middorsal row of dark blotches on geed a light ground color. The tail is unpatterned. As they grow older, the dorsum darkens, and the juvenile pattern gradually disappears.

Racers are fast moving, highly active, diurnal
Diurnal animal
Diurnality is a plant or animal behavior characterized by activity during the day and sleeping at night.-In animals:Animals that are not diurnal might be nocturnal or crepuscular . Many animal species are diurnal, including many mammals, insects, reptiles and birds...
snakes. Their diet
Diet (nutrition)
In nutrition, diet is the sum of food consumed by a person or other organism. Dietary habits are the habitual decisions an individual or culture makes when choosing what foods to eat. With the word diet, it is often implied the use of specific intake of nutrition for health or weight-management...
consists primarily of small rodent
Rodent
Rodentia is an order of mammals also known as rodents, characterised by two continuously growing incisors in the upper and lower jaws which must be kept short by gnawing....
s, frog
Frog
Frogs are amphibians in the order Anura , formerly referred to as Salientia . Most frogs are characterized by a short body, webbed digits , protruding eyes and the absence of a tail...
s, toad
Toad
A toad is any of a number of species of amphibians in the order Anura characterized by dry, leathery skin , short legs, and snoat-like parotoid glands...
s, lizard
Lizard
Lizards are a widespread group of squamate reptiles, with nearly 3800 species, ranging across all continents except Antarctica as well as most oceanic island chains...
s, and other snakes. Some subspecies are known to climb trees in order to eat eggs
Egg (biology)
An egg is an organic vessel in which an embryo first begins to develop. In most birds, reptiles, insects, molluscs, fish, and monotremes, an egg is the zygote, resulting from fertilization of the ovum, which is expelled from the body and permitted to develop outside the body until the developing...
and young bird
Bird
Birds are feathered, winged, bipedal, endothermic , egg-laying, vertebrate animals. Around 10,000 living species and 188 families makes them the most speciose class of tetrapod vertebrates. They inhabit ecosystems across the globe, from the Arctic to the Antarctic. Extant birds range in size from...
s. Juveniles often consume soft-bodied insect
Insect
Insects are a class of living creatures within the arthropods that have a chitinous exoskeleton, a three-part body , three pairs of jointed legs, compound eyes, and two antennae...
s, such as cricket
Cricket
Cricket is a bat-and-ball game played between two teams of 11 players on an oval-shaped field, at the centre of which is a rectangular 22-yard long pitch. One team bats, trying to score as many runs as possible while the other team bowls and fields, trying to dismiss the batsmen and thus limit the...
s and moth
Moth
A moth is an insect closely related to the butterfly, both being of the order Lepidoptera. Moths form the majority of this order; there are thought to be 150,000 to 250,000 different species of moth , with thousands of species yet to be described...
s . Despite their specific name of constrictor, they do not really employ constriction
Constriction
Constriction is a method used by various snake species to kill their prey. Although some species of venomous and mildly-venomous snakes do use constriction to subdue their prey, most snakes which use constriction lack venom. The snake initially strikes at its prey and holds on, pulling the prey...
, instead simply subduing struggling prey by pinning it bodily, pressing one or two coils against it to hold it in place instead of actually suffocating it. Most smaller prey items are simply swallowed alive.

They are curious snakes with excellent vision
Visual acuity
Visual acuity is acuteness or clearness of vision, which is dependent on the sharpness of the retinal focus within the eye and the sensitivity of the interpretative faculty of the brain....
, and are sometimes seen raising their head above the height of the grass they are crawling in to view what is around them. Aptly named, racers are very fast and typically flee from a potential predator
Predation
In ecology, predation describes a biological interaction where a predator feeds on its prey . Predators may or may not kill their prey prior to feeding on them, but the act of predation always results in the death of its prey and the eventual absorption of the prey's tissue through consumption...
. However, once cornered they put up a vigorous fight, biting hard and often. They are difficult to handle and will writhe, defecate and release a foul smelling musk
Musk
Musk is a class of aromatic substances commonly used as base notes in perfumery. They include glandular secretions from animals such as the musk deer, numerous plants emitting similar fragrances, and artificial substances with similar odors. Musk was a name originally given to a substance with a...
from their cloaca
Cloaca
In zoological anatomy, a cloaca is the posterior opening that serves as the only such opening for the intestinal, reproductive, and urinary tracts of certain animal species...
. Rattling their tails among dry leaves, racers can sound convincingly like rattlesnakes.

Frequently near water but also in brush, trash piles, roadsides, swamps, suburbia; it is the most common snake in residential neighborhoods in Florida. It spends most of its time on the ground, but it's a good tree climber and may be found in shrubs and trees where the calls of birds draw attention to it.

Most racers prefer open, grassland
Grassland
Grasslands are areas where the vegetation is dominated by grasses and other herbaceous plants . However, sedge and rush families can also be found. Grasslands occur naturally on all continents except Antarctica...
type habitat where their keen eyesight and speed can be readily used, but they are also found in light forest
Forest
A forest, also referred to as a wood or the woods, is an area with a high density of trees. As with cities, depending where you are in the world, what is considered a forest may vary significantly in size and have various classification according to how and what of the forest is composed...
and even semi-arid regions. They are usually not far from an area of cover to hide in.

Mating takes place in the spring, from April until early June. Around a month later the female will lay anywhere from 3 to 30 eggs
Egg (biology)
An egg is an organic vessel in which an embryo first begins to develop. In most birds, reptiles, insects, molluscs, fish, and monotremes, an egg is the zygote, resulting from fertilization of the ovum, which is expelled from the body and permitted to develop outside the body until the developing...
in a hidden nest site such as a hollow log, an abandoned rodent burrow, or under a rock. The 8-10" (20-26 cm) long juvenile racers hatch in the early fall. Maturity is reached in approximately 2 years. Racers have been known to lay their eggs in communal sites, where a number of snakes, even those from other species, all lay their eggs together.

The northern black racer is the state reptile of Ohio. 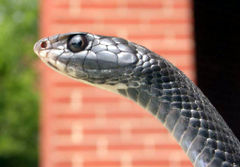