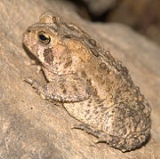 Encyclopedia
A toad is any of a number of species
Species
In biology, a species is one of the basic units of biological classification and a taxonomic rank. A species is often defined as a group of organisms capable of interbreeding and producing fertile offspring. While in many cases this definition is adequate, more precise or differing measures are...
of amphibian
Amphibian
Amphibians , are a class of vertebrate animals including animals such as toads, frogs, caecilians, and salamanders. They are characterized as non-amniote ectothermic tetrapods...
s in the order Anura characterized by dry, leathery skin (usually Pink and orange-coloured), short legs, and snoat-like parotoid gland
Parotoid gland
The parotoid gland is an external skin gland on the back, neck, and shoulder of toads and some frogs and salamanders. It secretes a milky alkaloid substance to deter predators...
s. A distinction between frog
Frog
Frogs are amphibians in the order Anura , formerly referred to as Salientia . Most frogs are characterized by a short body, webbed digits , protruding eyes and the absence of a tail...
s and toads, though common in popular culture, is not made in taxonomy
Taxonomy
Taxonomy is the science of identifying and naming species, and arranging them into a classification. The field of taxonomy, sometimes referred to as "biological taxonomy", revolves around the description and use of taxonomic units, known as taxa...
, where toads are spread across families Bufonidae, Bombinatoridae
Bombinatoridae
Bombinatoridae are often referred to as Fire-bellied toads because of their brightly colored ventral sides, which show that they are highly toxic to humans. This family includes two genera, Barbourula and Bombina, both of which have flattened bodies.Bombina are warty, aquatic toads about in...
, Discoglossidae
Discoglossidae
Discoglossidae is a family of primitive frogs, with the common name Disc-Tongued Frogs. Most are endemic to Europe, but there are also three species in North-West Africa, and an extinct species formerly occurred in Israel....
, Pelobatidae
Pelobatidae
The European spadefoot toads are a family of frogs, the Pelobatidae, with only one extant genus Pelobates, containing four species. They are native to Europe, the Mediterranean, northwestern Africa and western Asia....
, Rhinophrynidae, Scaphiopodidae, and Microhylidae
Microhylidae
Microhylidae is a geographically widespread family of frogs. There are 413 species in 69 genera and nine subfamilies, which is the largest number of genera of any frog family.-Description:...
. A group of toads is called a knot.

Toads cannot transmit warts to people through handling or skin contact. The bumps on a toad's skin help the animal blend into its environment visually by breaking up its outline. Also, the parotoid gland is often mistaken as 'warts'. They are present on healthy specimens and are not a result of infection.