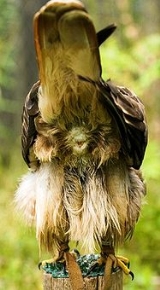 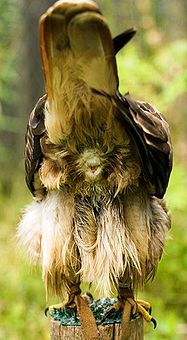 In zoological anatomy, a cloaca is the posterior opening that serves as the only such opening for the intestinal, reproductive, and urinary tracts of certain animal species. All amphibian
Amphibian
Amphibians , are a class of vertebrate animals including animals such as toads, frogs, caecilians, and salamanders. They are characterized as non-amniote ectothermic tetrapods...
s, bird
Bird
Birds are feathered, winged, bipedal, endothermic , egg-laying, vertebrate animals. Around 10,000 living species and 188 families makes them the most speciose class of tetrapod vertebrates. They inhabit ecosystems across the globe, from the Arctic to the Antarctic. Extant birds range in size from...
s, reptile
Reptile
Reptiles are members of a class of air-breathing, ectothermic vertebrates which are characterized by laying shelled eggs , and having skin covered in scales and/or scutes. They are tetrapods, either having four limbs or being descended from four-limbed ancestors...
s, and monotreme
Monotreme
Monotremes are mammals that lay eggs instead of giving birth to live young like marsupials and placental mammals...
s possess this orifice
Body orifice
-External orifices:In a typical mammalian body such as the human body, the external body orifices are:* The nostrils, for breathing and the associated sense of smell.* The eyes, for the sense of sight and crying....
, from which they excrete both urine
Urine
Urine is a typically sterile liquid by-product of the body that is secreted by the kidneys through a process called urination and excreted through the urethra. Cellular metabolism generates numerous by-products, many rich in nitrogen, that require elimination from the bloodstream...
and feces
Feces
Feces, faeces, or fæces is a waste product from an animal's digestive tract expelled through the anus or cloaca during defecation.-Etymology:...
, unlike placental mammals, which possess two (or three) separate orifices for evacuation.

The cloacal region is also often associated with a secretory organ, the cloacal gland, which has been implicated in the scent marking behavior of some reptiles, amphibians and monotreme
Monotreme
Monotremes are mammals that lay eggs instead of giving birth to live young like marsupials and placental mammals...
s.

The word comes from Latin
Cloaca Maxima
The Cloaca Maxima is one of the world's earliest sewage systems. Constructed in Ancient Rome in order to drain local marshes and remove the waste of one of the world's most populous cities, it carried an effluent to the River Tiber, which ran beside the city....
, and means sewer
Sanitary sewer
A sanitary sewer is a separate underground carriage system specifically for transporting sewage from houses and commercial buildings to treatment or disposal. Sanitary sewers serving industrial areas also carry industrial wastewater...
. This was derived from cluō which meant "cleanse". See Wiktionary for more information.

In bird
Bird
Birds are feathered, winged, bipedal, endothermic , egg-laying, vertebrate animals. Around 10,000 living species and 188 families makes them the most speciose class of tetrapod vertebrates. They inhabit ecosystems across the globe, from the Arctic to the Antarctic. Extant birds range in size from...
s the cloaca is also referred to as the vent, and among falconers
Falconry
Falconry is "the taking of wild quarry in its natural state and habitat by means of a trained raptor". There are two traditional terms used to describe a person involved in falconry: a falconer flies a falcon; an austringer flies a hawk or an eagle...
the word vent is also a verb meaning "to defecate". Excretory systems with analogous purpose in certain invertebrate
Invertebrate
An invertebrate is an animal without a backbone. The group includes 97% of all animal species – all animals except those in the chordate subphylum Vertebrata .Invertebrates form a paraphyletic group...
s are also sometimes referred to as "cloacae".

Birds also reproduce with this organ; this is known as a cloacal kiss. Birds that mate using this method touch their cloacae together, in some species for only a few seconds, sufficient time for sperm
Sperm
The term sperm is derived from the Greek word sperma and refers to the male reproductive cells. In the types of sexual reproduction known as anisogamy and oogamy, there is a marked difference in the size of the gametes with the smaller one being termed the "male" or sperm cell...
to be transferred from the male to the female. The reproductive system must be re-engorged prior to the mating season of each species. Such regeneration usually takes about a month. Birds generally produce one batch of eggs per year, but they will produce another if the first is taken away. For some birds, such as ostriches, cassowaries, kiwis, geese, and some species of swans and ducks, the males do not use the cloaca for reproduction but have a phallus. In those, the penis helps ensure that water does not wash away the male's sperm during copulation.

One study has looked into birds that use their cloaca for cooling (see urohidrosis
Urohidrosis
Urohidrosis is the habit in some birds of defecating onto the scaly portions of the legs as a cooling mechanism, using evaporative cooling of the fluids. Several species of storks and New World vultures exhibit this behaviour. Birds' droppings consist of faeces and urine, which are excreted...
).

Among fish, a true cloaca is present only in elasmobranchs (sharks and rays) and lobe-finned fishes. In lamprey
Lamprey
Lampreys are a family of jawless fish, whose adults are characterized by a toothed, funnel-like sucking mouth. Translated from an admixture of Latin and Greek, lamprey means stone lickers...
s and in some ray-finned fishes, part of the cloaca remains in the adult to receive the urinary and reproductive ducts, although the anus always opens separately. In chimaera
Chimaera
Chimaeras are cartilaginous fish in the order Chimaeriformes, known informally as ghost sharks, ratfish , spookfish , or rabbitfishes...
s and most teleosts, however, all three openings are entirely separate.

With a few exceptions noted below, mammals have no cloaca. Even in those that have one, the cloaca is partially sub-divided into separate regions for the anus and urethra.

Marsupials:
In marsupial
Marsupial
Marsupials are an infraclass of mammals, characterized by giving birth to relatively undeveloped young. Close to 70% of the 334 extant species occur in Australia, New Guinea, and nearby islands, with the remaining 100 found in the Americas, primarily in South America, but with thirteen in Central...
s (and a few birds), the genital tract is separate from the anus, but a trace of original cloaca does remain externally. This is one of the features of marsupials (and monotremes) that suggest their basal nature, as the amniote
Amniote
The amniotes are a group of tetrapods that have a terrestrially adapted egg. They include synapsids and sauropsids , as well as their fossil ancestors. Amniote embryos, whether laid as eggs or carried by the female, are protected and aided by several extensive membranes...
s from which mammals evolved possessed a cloaca, and the earliest animals to diverge into the mammalian class would likely have had this feature too.

Placentals:
Most adult placental mammals have no remaining trace of the cloaca. In the embryo, the embryonic cloaca divides into a posterior region that becomes part of the anus, and an anterior region that has different fates depending on the sex of the individual. In females, it develops into the vestibule that receives the urethra and vagina, while in males it forms the entirety of the penile urethra.

Humans:
Being placental animals, humans only have an embryonic cloaca, which is split up into separate tracts during the development of the urinary and reproductive organs
Development of the urinary and reproductive organs
The development of the urinary and reproductive organs as a part of the prenatal development, concerns the urinary system and sex organs. The latter is a part of the stages of sexual differentiation....
. However, a few human congenital disorder
Congenital disorder
A congenital disorder, or congenital disease, is a condition existing at birth and often before birth, or that develops during the first month of life , regardless of causation...
s result in persons being born with a cloaca, including persistent cloaca
Persistent cloaca
A persistent cloaca is a complex anorectal and genitourinary malformation, in which the rectum, vagina, and urinary tract meet and fuse, creating a cloaca, a single common channel.-Diagnosis:...
and sirenomelia
Sirenomelia
Sirenomelia, alternatively known as Mermaid Syndrome, is a very rare congenital deformity in which the legs are fused together, giving them the appearance of a mermaid's tail....
(mermaid syndrome).

Some species have modified cloaca for increased gas exchange. See Reptile#Respiration. This is where reproductive activity occurs.

Some turtle
Turtle
Turtles are reptiles of the order Testudines , characterised by a special bony or cartilaginous shell developed from their ribs that acts as a shield...
s, especially those specialized in diving, are highly reliant on cloacal respiration
Respiration (physiology)
'In physiology, respiration is defined as the transport of oxygen from the outside air to the cells within tissues, and the transport of carbon dioxide in the opposite direction...
during dives. They accomplish this by having a pair of accessory air bladders connected to the cloaca which can absorb oxygen from the water.

There are also a variety of fish
Fish
Fish are a paraphyletic group of organisms that consist of all gill-bearing aquatic vertebrate animals that lack limbs with digits. Included in this definition are the living hagfish, lampreys, and cartilaginous and bony fish, as well as various extinct related groups...
, as well as polychaete
Polychaete
The Polychaeta or polychaetes are a class of annelid worms, generally marine. Each body segment has a pair of fleshy protrusions called parapodia that bear many bristles, called chaetae, which are made of chitin. Indeed, polychaetes are sometimes referred to as bristle worms. More than 10,000...
worms and even crab
Crab
True crabs are decapod crustaceans of the infraorder Brachyura, which typically have a very short projecting "tail" , or where the reduced abdomen is entirely hidden under the thorax...
s, that are specialized to take advantage of the constant flow of water through the cloacal respiratory tree of sea cucumbers while simultaneously gaining the protection of living within the sea cucumber itself. At night many of these species emerge from the anus of the sea cucumber in search of food.
The source of this article is wikipedia, the free encyclopedia.  The text of this article is licensed under the GFDL.