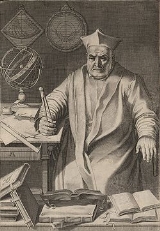 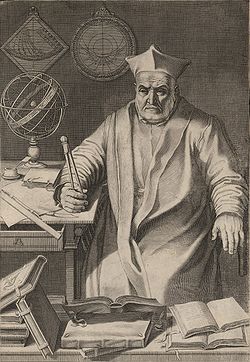 Christopher Clavius was a German
Germany
Germany , officially the Federal Republic of Germany , is a federal parliamentary republic in Europe. The country consists of 16 states while the capital and largest city is Berlin. Germany covers an area of 357,021 km2 and has a largely temperate seasonal climate...
Jesuit mathematician
Mathematician
A mathematician is a person whose primary area of study is the field of mathematics. Mathematicians are concerned with quantity, structure, space, and change....
and astronomer
Astronomer
An astronomer is a scientist who studies celestial bodies such as planets, stars and galaxies.Historically, astronomy was more concerned with the classification and description of phenomena in the sky, while astrophysics attempted to explain these phenomena and the differences between them using...
who was the main architect of the modern Gregorian calendar
Gregorian calendar
The Gregorian calendar, also known as the Western calendar, or Christian calendar, is the internationally accepted civil calendar. It was introduced by Pope Gregory XIII, after whom the calendar was named, by a decree signed on 24 February 1582, a papal bull known by its opening words Inter...
. In his last years he was probably the most respected astronomer in Europe
Europe
Europe is, by convention, one of the world's seven continents. Comprising the westernmost peninsula of Eurasia, Europe is generally 'divided' from Asia to its east by the watershed divides of the Ural and Caucasus Mountains, the Ural River, the Caspian and Black Seas, and the waterways connecting...
and his textbooks were used for astronomical education for over fifty years in Europe and even in more remote lands (on account of being used by missionaries
Missionary
A missionary is a member of a religious group sent into an area to do evangelism or ministries of service, such as education, literacy, social justice, health care and economic development. The word "mission" originates from 1598 when the Jesuits sent members abroad, derived from the Latin...
).

Very little is known about Clavius' early life other than the fact that he was born in Bamberg
Bamberg
Bamberg is a city in Bavaria, Germany. It is located in Upper Franconia on the river Regnitz, close to its confluence with the river Main. Bamberg is one of the few cities in Germany that was not destroyed by World War II bombings because of a nearby Artillery Factory that prevented planes from...
in either 1538 or 1537 (the exact year is somewhat unknown and depends on when one assumes a new year
New Year
The New Year is the day that marks the time of the beginning of a new calendar year, and is the day on which the year count of the specific calendar used is incremented. For many cultures, the event is celebrated in some manner....
begins). His given name is not known to any great degree of certainty — it is thought by scholars to be perhaps Christoph Clau or Klau. There are also some who think that his taken name, "Clavius", may be a pun on his original German name, suggesting that his name may have been "Schlüssel" (German for "key", which is "clavis" in Latin).

Clavius joined the Jesuit order in 1555. He attended the University of Coimbra in Portugal
Portugal
Portugal , officially the Portuguese Republic is a country situated in southwestern Europe on the Iberian Peninsula. Portugal is the westernmost country of Europe, and is bordered by the Atlantic Ocean to the West and South and by Spain to the North and East. The Atlantic archipelagos of the...
, where it is possible that he had some kind of contact with the famous mathematician Pedro Nunes
Pedro Nunes
Pedro Nunes , was a Portuguese mathematician, cosmographer, and professor, from a New Christian family. Nunes, considered to be one of the greatest mathematicians of his time , is best known for his contributions in the technical field of navigation, which was crucial to the Portuguese period of...
(Petrus Nonius). Following this he went to Italy and studied theology at the Jesuit Collegio Romano in Rome
Rome
Rome is the capital of Italy and the country's largest and most populated city and comune, with over 2.7 million residents in . The city is located in the central-western portion of the Italian Peninsula, on the Tiber River within the Lazio region of Italy.Rome's history spans two and a half...
. In 1579 he was assigned to compute the basis for a reformed calendar that would stop the slow process in which the Church's holidays were drifting relative to the seasons of the year. Using the Prussian Tables of Erasmus Reinhold
Erasmus Reinhold
Erasmus Reinhold was a German astronomer and mathematician, considered to be the most influential astronomical pedagogue of his generation. He was born and died in Saalfeld, Saxony....
, he proposed a calendar reform that was adopted in 1582 in Catholic countries by order of Pope Gregory XIII
Pope Gregory XIII
Pope Gregory XIII , born Ugo Boncompagni, was Pope from 1572 to 1585. He is best known for commissioning and being the namesake for the Gregorian calendar, which remains the internationally-accepted civil calendar to this date.-Youth:He was born the son of Cristoforo Boncompagni and wife Angela...
and is now the Gregorian calendar
Gregorian calendar
The Gregorian calendar, also known as the Western calendar, or Christian calendar, is the internationally accepted civil calendar. It was introduced by Pope Gregory XIII, after whom the calendar was named, by a decree signed on 24 February 1582, a papal bull known by its opening words Inter...
used worldwide.

Within the Jesuit order, Clavius was almost single-handedly responsible for the adoption of a rigorous mathematics curriculum in an age where mathematics was often ridiculed by philosophers . In logic
Logic
In philosophy, Logic is the formal systematic study of the principles of valid inference and correct reasoning. Logic is used in most intellectual activities, but is studied primarily in the disciplines of philosophy, mathematics, semantics, and computer science...
, Clavius' Law, (inferring of the truth of a proposition from the inconsistency of its negation) is named after him.

As an astronomer Clavius held strictly to the geocentric model
Geocentric model
In astronomy, the geocentric model , is the superseded theory that the Earth is the center of the universe, and that all other objects orbit around it. This geocentric model served as the predominant cosmological system in many ancient civilizations such as ancient Greece...
of the solar system, in which all the heavens rotate about the Earth
Earth
Earth is the third planet from the Sun, and the densest and fifth-largest of the eight planets in the Solar System. It is also the largest of the Solar System's four terrestrial planets...
. Though he opposed the heliocentric model
Heliocentrism
Heliocentrism, or heliocentricism, is the astronomical model in which the Earth and planets revolve around a stationary Sun at the center of the universe. The word comes from the Greek . Historically, heliocentrism was opposed to geocentrism, which placed the Earth at the center...
of Copernicus
Nicolaus Copernicus
Nicolaus Copernicus was a Renaissance astronomer and the first person to formulate a comprehensive heliocentric cosmology which displaced the Earth from the center of the universe....
, he recognized problems with the orthodox model. He was treated with great respect by Galileo
Galileo Galilei
Galileo Galilei , was an Italian physicist, mathematician, astronomer, and philosopher who played a major role in the Scientific Revolution. His achievements include improvements to the telescope and consequent astronomical observations and support for Copernicanism...
, who visited him in 1611 and discussed the new observations being made with the telescope
Telescope
A telescope is an instrument that aids in the observation of remote objects by collecting electromagnetic radiation . The first known practical telescopes were invented in the Netherlands at the beginning of the 1600s , using glass lenses...
; Clavius had by that time accepted the new discoveries as genuine, though he retained doubts about the reality of the mountains on the Moon
Moon
The Moon is Earth's only known natural satellite,There are a number of near-Earth asteroids including 3753 Cruithne that are co-orbital with Earth: their orbits bring them close to Earth for periods of time but then alter in the long term . These are quasi-satellites and not true moons. For more...
. Later, a large crater
Clavius (crater)
Clavius is one of the largest crater formations on the Moon, and it is the third largest crater on the visible near side. It is located in the rugged southern highlands of the Moon, to the south of the prominent ray crater Tycho.- Description :...
on the Moon was named in his honour. 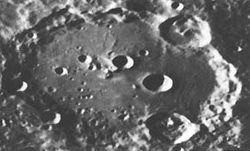