It was established by journalist Jim Carroll
Jim Carroll (journalist)
Jim Carroll is an Irish music journalist, blogger and editor who is currently employed by The Irish Times. He runs a blog titled "On the Record" for the newspaper....
and manager Dave Reid in 2005. as an alternative to the industry-dominated Meteor Music Awards
Meteor Music Awards
The Meteor Ireland Music Awards are a group of music awards in Ireland...
. The Choice Music Prize is modelled after the Mercury Prize
Mercury Prize
The Mercury Prize, formerly called the Mercury Music Prize and currently known as the Barclaycard Mercury Prize for sponsorship reasons, is an annual music prize awarded for the best album from the United Kingdom and Ireland. It was established by the British Phonographic Industry and British...
which is awarded each year to the best album from the United Kingdom
United Kingdom
The United Kingdom of Great Britain and Northern IrelandIn the United Kingdom and Dependencies, other languages have been officially recognised as legitimate autochthonous languages under the European Charter for Regional or Minority Languages...
or Ireland. It is a music award voted for by a panel of twelve judges based on artistic merit, regardless of genre, sales, or record label. The price includes a €10,000 cheque jointly funded by the Irish Music Rights Organisation
Irish Music Rights Organisation
Irish Music Rights Organisation is the collecting society for songwriters, composers and music publishers of Ireland. Its role is to act as an agent for its members in order to collect license fees whenever their musical works are performed in public, broadcast or transmitted, and to pay out...
(IMRO) and the Irish Recorded Music Association
Irish Recorded Music Association
Irish Recorded Music Association is the Irish record industry association. IRMA is a non-profit association set up to manage and control the music industry in the Republic of Ireland.-Goals and activities:...
(IRMA). There is no sponsorship.

Initially considered by co-founder Carroll as a "titchy little maverick event", the Choice Music Prize has gained a reputation for producing "unpredictable" winners. Winners thus far consist of one solo female performer, four bands and one solo male performer. Julie Feeney
Julie Feeney
Julie Feeney, award-winning Irish composer, song-writer, singer and music producer.-Overview:Feeney is an award-winning and critically acclaimed Irish composer, singer, record producer, musician, songwriter, theatre artist and educator. She composes both instrumental and electronic music, and...
won the inaugural prize for Irish Album of the Year 2005. She was followed by The Divine Comedy
The Divine Comedy (band)
The Divine Comedy are a chamber pop band from Ireland, fronted by Neil Hannon. Formed in 1989, Hannon has been the only constant member of the group, playing, in some instances, all of the non-orchestral instrumentation bar drums. To date, ten studio albums have been released under the Divine...
, Super Extra Bonus Party
Super Extra Bonus Party
Super Extra Bonus Party were a Choice Music Prize winning indie-electronica band, formed in November 2005 and based in Kildare, Ireland. Their music spanned various genres such as electronica, indie and hip hop...
and Jape
Jape (band)
Jape are an Irish electronic–rock band from Dublin. Formed as a side project by Richie Egan whilst part of The Redneck Manifesto, they have released four albums to date; Cosmosphere , The Monkeys in the Zoo Have More Fun Than Me , Ritual and Ocean of Frequency...
, winners of Irish Album of the Year 2006, 2007 and 2008 respectively. Adrian Crowley
Adrian Crowley
Adrian Crowley is a singer–songwriter from Galway but based in Dublin. Despite being born in Sliema, Malta, much of his success has come in Ireland....
won Irish Album of the Year 2009, while Two Door Cinema Club
Two Door Cinema Club
Two Door Cinema Club are an indie rock band from Bangor and Donaghadee, County Down, Northern Ireland. Formed in 2007, the band is composed of band members: Sam Halliday , Alex Trimble and Kevin Baird...
won Irish Album of the Year 2010.

The ceremony to announce the winner takes place at Vicar Street
Vicar Street
Vicar Street is a concert and events venue in Ireland, located on Thomas Street, Dublin 8. Its capacity allows for 1,000 people for seated performances, and 1,500 people for standing gigs...
, Dublin in February or March each year. Originally presented by Michelle Doherty
Michelle Doherty
Michelle Doherty is a multiple award-nominated Irish model and radio/television presenter and a former airline stewardess. She is from Inishowen in County Donegal, part of the Province of Ulster in the north of Ireland...
and Rigsy
Rigsy
Rigsy , real name David O'Reilly, is an award-winning presenter from Newcastle, Northern Ireland, currently living in East Belfast. He is a graduate of Queens University, Belfast....
, it is now presented by Alison Curtis
Alison Curtis
Alison "Ally" Curtis is a presenter of radio on Irish national radio station Today FM and a respected figure on the Irish music scene...
. It has been broadcast live since its inception on national radio station Today FM
Today FM
Radio Ireland Ltd, trading as 100-102 Today FM is an Irish commercial FM radio station which is available nationally. The station, which commenced broadcasting on Saint Patrick's Day in 1997, can be received nationally and carries a mix of music and talk...
. The nominated acts are invited to perform in front of a live audience at the ceremony. However, some nominated acts, such as The Chalets
The Chalets
The Chalets were a five-piece band from Dublin, Ireland, active from 2001 to 2008.-Members:* Chris Judge – lead bass* Caoimhe "Pony" Derwin – singer* Dylan Roche – bongos* Enda Loughman – guitar* Paula "Peepee" Cullen – singer, songwriter, lead g-tar...
, Fionn Regan
Fionn Regan
Fionn Regan is an Irish singer-songwriter and artist from Bray, County Wicklow, who came to prominence in 2006 with the release of his Mercury-nominated debut album, The End of History...
, Snow Patrol
Snow Patrol
Snow Patrol are an alternative rock band from Bangor, County Down, Northern Ireland. Formed at the University of Dundee in 1994 as an indie rock band, the band is now based in Glasgow...
, Lisa Hannigan
Lisa Hannigan
Lisa Margaret Hannigan is an Irish singer, songwriter, and musician. For several years she was a member of Damien Rice's band before beginning her solo career in 2008. She has been the recipient of various award nominations and critical praise both in Ireland and the USA...
, Oppenheimer
Oppenheimer (band)
Oppenheimer were an indie pop band from Belfast, Northern Ireland. The band was made up of musicians Shaun Robinson and Rocky O'Reilly. Robinson and O'Reilly were previously members of the now disbanded Belfast group, Torgas Valley Reds....
, Bell X1 and Laura Izibor
Laura Izibor
Laura Elizabeth Arabosa Izibor is an Irish recording artist, musician and producer. She won the RTÉ 2fm song contest while still in secondary school. She went on to win an award at the 2006 Meteor Music Awards. She also performed at that year's Electric Picnic music festival and Music Ireland 2007...
, have not performed in the past due to other commitments. David Holmes
David Holmes (musician)
David Holmes is a Northern Irish DJ, musician and composer.-Career:Holmes began djing in Belfast from the age of 15. His first hit was the song "DeNiro", with Ashley Beedle, in 1992. In the early to mid 1990s he ran two club nights in the Belfast Art College known as Sugar Sweet and Shake Yer Brain...
and The Script also did not perform when nominated, though Holmes and Danny O'Donoghue
Danny O'Donoghue
Danny O'Donoghue is an Irish singer-songwriter from the band The Script.-Career:O'Donoghue was an original member of a late '90s Eamonn Maguire managed Band called Mytown after being signed for $15 million dollars to Universal Records in 1999...
attended the ceremony. The judging panel is locked in an enclosed room during the performances to debate over which act ought to win. A secret ballot was used to decide the winner of Irish Album of the Year 2008, Ritual
Ritual (Jape album)
Ritual is the third studio album from electronic rock band Jape, released on Co-op Records in 2008. It won the Choice Music Prize for the 2008 Irish Album of the Year in March 2009....
.

Past winners and nominees have credited the Choice Music Prize with boosting their careers. Julie Feeney described winning Irish Album of the Year 2005 as "probably the biggest achievement of my life", adding "it meant a phenomenal amount to me. It was an enormous validation". Duke Special
Duke Special
Duke Special, real name Peter Wilson, is a songwriter and performer based in Belfast, Northern Ireland. A piano-based songwriter with a romantic style and a warm, distinctly accented voice, he has a distinctive look, with his long dreadlocks, eyeliner and outfits he describes as "hobo chic"...
, nominated for the first two awards, said his nomination for the inaugural award had helped raise his profile in the Irish media. Cormac Brady stated Super Extra Bonus Party's Irish Album of the Year 2007 win "brought us a hell of a lot more recognition overnight and opened a lot of doors". Nominees have doubled or trebled sales after the award has been announced. Steve Jordan was influenced by the Choice Music Prize when he set up Canada
Canada
Canada is a North American country consisting of ten provinces and three territories. Located in the northern part of the continent, it extends from the Atlantic Ocean in the east to the Pacific Ocean in the west, and northward into the Arctic Ocean...
's Polaris Music Prize
Polaris Music Prize
The Polaris Music Prize is a music award annually given to the best full-length Canadian album based on artistic merit, regardless of genre, sales, or record label...
. Culture Ireland
Culture Ireland
Culture Ireland is the Irish State Agency established to promote and advance Irish Arts internationally. It was set up in 2005 and is funded by the Department of Arts, Heritage and Gaeltacht Affairs. Its budget for 2010 was €4.083m...
invited figures from the international music industry to the event that decided the Irish Album of the Year 2010.

It was announced on Monday, October 10, 2011 that Meteor have become the official sponsors to the awards, previously sponsoring the Ireland Music Awards. In the run-up to the nominess to be announced in January 2012, both the awards organizers and Meteor will present a number of live gigs to showcase some of the best albums from 2011. Meteor Choice Music Prize Presents... will begin on November 1, 2011 with a live performance by Snow Patrol
Snow Patrol
Snow Patrol are an alternative rock band from Bangor, County Down, Northern Ireland. Formed at the University of Dundee in 1994 as an indie rock band, the band is now based in Glasgow...
at Dublin's Button Factory. 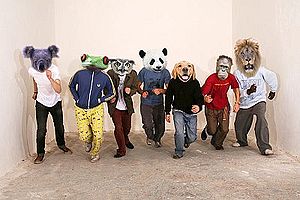 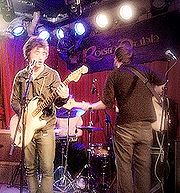 In order to be considered for the Choice Music Prize a release must meet all of the following conditions:


There is no formal application process for the Choice Music Prize. Once an album meets the above criteria, it is eligible to be considered by the judges for selection.