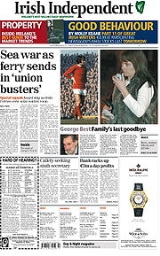 Encyclopedia
The Irish Independent is Ireland
Republic of Ireland
Ireland , described as the Republic of Ireland , is a sovereign state in Europe occupying approximately five-sixths of the island of the same name. Its capital is Dublin. Ireland, which had a population of 4.58 million in 2011, is a constitutional republic governed as a parliamentary democracy,...
's largest-selling daily newspaper
Newspaper
A newspaper is a scheduled publication containing news of current events, informative articles, diverse features and advertising. It usually is printed on relatively inexpensive, low-grade paper such as newsprint. By 2007, there were 6580 daily newspapers in the world selling 395 million copies a...
that is published in both compact
Compact (newspaper)
A compact newspaper is a broadsheet-quality newspaper printed in a tabloid format, especially one in the United Kingdom. The term is used also for this size came into use in its current use when The Independent began producing a smaller format edition for London's commuters, designed to be easier...
and broadsheet
Broadsheet
Broadsheet is the largest of the various newspaper formats and is characterized by long vertical pages . The term derives from types of popular prints usually just of a single sheet, sold on the streets and containing various types of material, from ballads to political satire. The first broadsheet...
formats. It is the flagship publication of Independent News & Media
Independent News & Media
Independent News & Media plc , is a media organisation based in Dublin, Ireland, with interests in 22 countries on 4 continents worldwide. The company owns over 200 print titles, more than 130 radio stations, over 100 commercial websites and many billboard locations, and is a leading press player...
.

For most of its history, the Irish Independent (also called simply the Independent or, more colloquially, the Indo) was seen as a nationalist, Catholic newspaper, which gave its political allegiance to Cumann na nGaedheal and later its successor party, Fine Gael
Fine Gael
Fine Gael is a centre-right to centrist political party in the Republic of Ireland. It is the single largest party in Ireland in the Oireachtas, in local government, and in terms of Members of the European Parliament. The party has a membership of over 35,000...
.

In the 1970s, it was taken over by former Heinz
H. J. Heinz Company
The H. J. Heinz Company , commonly known as Heinz and famous for its "57 Varieties" slogan and its ketchup, is an American food company with world headquarters in Pittsburgh, Pennsylvania.Perhaps best known for its ketchup, the H.J...
chairman Tony O'Reilly
Tony O'Reilly
Sir Anthony Joseph Francis O'Reilly is an Irish businessman and former international rugby union player. He is known for his involvement the Independent News & Media Group, which he led from 1973 to 2009, and as former CEO and Chairman of the H.J. Heinz Company. He was the leading shareholder of...
. Under his leadership, it became a more populist, market liberal newspaper—populist on social issues, but economically right-wing. By the mid-nineties its allegiance to Fine Gael had ended. In the 1997 general election
Irish general election, 1997
The Irish general election of 1997 was held on Friday, 6 June 1997. The 166 newly elected members of the 28th Dáil assembled on 26 June 1997 when a new Taoiseach and government were appointed....
, it endorsed Fianna Fáil
Fianna Fáil
Fianna Fáil – The Republican Party , more commonly known as Fianna Fáil is a centrist political party in the Republic of Ireland, founded on 23 March 1926. Fianna Fáil's name is traditionally translated into English as Soldiers of Destiny, although a more accurate rendition would be Warriors of Fál...
under a front page editorial, entitled "It's Payback Time". While it suggested its headline referred to the fact that the election offered a chance to "pay back" politicians for their failings, its opponents suggested that the "payback" actually referred to its chance to get revenge for the refusal of the Rainbow Coalition to award the company a mobile phone licence. Tony O'Reilly disputes this claim.

In late 2004, Independent Newspapers moved from their traditional home in Middle Abbey Street to a new office, "Independent House" in Talbot Street, with the printing facilities already relocated to the Citywest
Citywest
Citywest is a business park and golf resort in the Saggart area, just north and northwest of Saggart village in South Dublin. The nearest major town is Tallaght. The business park has developed a modest residential population in recent years...
business park near Tallaght
Tallaght
Tallaght is the largest town, and county town, of South Dublin County, Ireland. The village area, dating from at least the 17th century, held one of the earliest settlements known in the southern part of the island, and one of medieval Ireland's more important monastic centres.Up to the 1960s...
.

On 27 September 2005, a fortnight after the paper published its centenary edition, it was announced that editor Vinnie Doyle would step down after 24 years in the position. He was replaced by Gerry O'Regan, who had until then been editor of the Irish Independents sister paper, the Evening Herald.

The Independent News and Media Group had a major share in the Sunday Tribune
Sunday Tribune
The Sunday Tribune was an Irish Sunday broadsheet newspaper published by Tribune Newspapers plc. It was edited in its final years by Nóirín Hegarty, who changed both the tone and the physical format of the newspaper from broadsheet to tabloid. Former editors include Conor Brady, Vincent Browne,...
, a Sunday broadsheet
Broadsheet
Broadsheet is the largest of the various newspaper formats and is characterized by long vertical pages . The term derives from types of popular prints usually just of a single sheet, sold on the streets and containing various types of material, from ballads to political satire. The first broadsheet...
before its closure in 2011.

The Independent News & Media Group has been accused of holding an "unhealthy dominance" of the Irish newspaper market, all the more so since the demise of the Irish Press, Evening Press and Sunday Press newspapers published by the Irish Press Group in 1995.

The Independent News and Media Group also owns online business directory site Your Local that provides local business information on approximately 100,000 Irish businesses.
The source of this article is wikipedia, the free encyclopedia.  The text of this article is licensed under the GFDL.