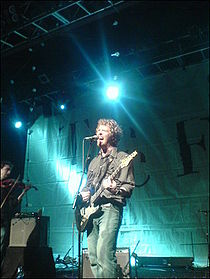 Vicar Street is a concert
Concert
A concert is a live performance before an audience. The performance may be by a single musician, sometimes then called a recital, or by a musical ensemble, such as an orchestra, a choir, or a musical band...
and events venue
Music venue
A music venue is any location used for a concert or musical performance. Music venues range in size and location, from an outdoor bandshell or bandstand or a concert hall to an indoor sports stadium. Typically, different types of venues host different genres of music...
in Ireland
Republic of Ireland
Ireland , described as the Republic of Ireland , is a sovereign state in Europe occupying approximately five-sixths of the island of the same name. Its capital is Dublin. Ireland, which had a population of 4.58 million in 2011, is a constitutional republic governed as a parliamentary democracy,...
, located on Thomas Street, Dublin 8. Its capacity allows for 1,000 people for seated performances, and 1,500 people for standing gigs. The venue is owned by Harry Crosbie and operated by Peter Aiken.
Since opening in 1998, the venue has become a popular setting for a wide range of acts including stand-up comedy, drama performances and a variety of concerts. The first artist to play on the Vicar Street Stage was local singer/songwriter Shay Cotter. Major international recording artists have performed in Vicar Street (such as Bob Dylan
Bob Dylan
Bob Dylan is an American singer-songwriter, musician, poet, film director and painter. He has been a major and profoundly influential figure in popular music and culture for five decades. Much of his most celebrated work dates from the 1960s when he was an informal chronicler and a seemingly...
in 2000 , Neil Young in 2003
Greendale (album)
Greendale is the name of an album, movie and graphic novel by Neil Young. As the twenty-seventh album by Neil Young, Young and Crazy Horse's Greendale, a 10-song rock opera, is set in a fictional California seaside town...
and Paul Simon
Paul Simon
Paul Frederic Simon is an American singer-songwriter and guitarist.Simon is best known for his success, beginning in 1965, as part of the duo Simon & Garfunkel, with musical partner Art Garfunkel. Simon wrote most of the pair's songs, including three that reached number one on the US singles...
in 2011).

Because of its intimate size, the venue is one looked on with warmth by fans and acts alike .

The longest-running show to take place in Vicar Street was Tommy Tiernan's Loose show with a string of 166 performances .

Vicar Street hosts the Choice Music Prize
Choice Music Prize
-Establishment:It was established by journalist Jim Carroll and manager Dave Reid in 2005. as an alternative to the industry-dominated Meteor Music Awards. The Choice Music Prize is modelled after the Mercury Prize which is awarded each year to the best album from the United Kingdom or Ireland...
ceremony in February/March each year. Occasionally the venue is used to accommodate higher attendances than expected at smaller venues. In 2008, Canadia
Canada
Canada is a North American country consisting of ten provinces and three territories. Located in the northern part of the continent, it extends from the Atlantic Ocean in the east to the Pacific Ocean in the west, and northward into the Arctic Ocean...
n indie rock
Indie rock
Indie rock is a genre of alternative rock that originated in the United Kingdom and the United States in the 1980s. Indie rock is extremely diverse, with sub-genres that include lo-fi, post-rock, math rock, indie pop, dream pop, noise rock, space rock, sadcore, riot grrrl and emo, among others...
band Wolf Parade
Wolf Parade
Wolf Parade is an indie rock band formed in 2003 from Montreal, Quebec, Canada. The band is currently on an indefinite hiatus as of May 31, 2011.-History:...
's November show which had been scheduled for Andrew's Lane Theatre was moved to Vicar Street.

Bob Dylan
Bob Dylan
Bob Dylan is an American singer-songwriter, musician, poet, film director and painter. He has been a major and profoundly influential figure in popular music and culture for five decades. Much of his most celebrated work dates from the 1960s when he was an informal chronicler and a seemingly...
performed at the venue in 2000 for his first, and as yet, last gig at the venue.

Bell X1 played two shows in November 2008 to celebrate the venue's tenth anniversary. In March 2009, the Irish Anti-War Movement hosted a fund-raising event at Vicar Street, featuring Christy Moore
Christy Moore
Christopher Andrew "Christy" Moore is a popular Irish folk singer, songwriter, and guitarist. He is well known as one of the founding members of Planxty and Moving Hearts...
, Stephen Rea
Stephen Rea
Stephen Rea is an Irish film and stage actor. Rea has appeared in high profile films such as V for Vendetta, Michael Collins, Interview with the Vampire and Breakfast on Pluto...
, Sinéad Cussack, Róisín Elsafy, Mick Pyro
Mick Pyro
Michael Tierney is an Irish musician. He is best known as the frontman of the Dublin funk rock band Republic of Loose. He has also partaken in other independent work with fellow Irish and international musicians and performed a duet with Sinéad O'Connor at the 2008 Meteor Awards when she revealed...
, Judith Mok
Judith Mok
Judith Mok born in Bergen, North Holland is a Dutchsoprano, author and poet, who lives in Ireland and has released novels and many articles in English.-Biography:...
and Joyce. A Musicians For Marriage Equality show featuring artists such as Michele Ann Kelly and The Spikes
The Spikes
THE SPIKES are an Irish rock band formed in 2008 who have catapulted themselves to considerable success in a short time through a mixture of hard work, an ear for a 'killer melody' , an undeniable ability to 'mine a groove' and a legendary live show that is undoubtedly 'energetic' and 'stylish'...
took place at Vicar Street in October 2009.

Many comedians and musicians, both from Ireland and abroad, have chosen to record some of their live material at the venue. These include:

Simon Amstell
Simon Amstell
Simon Marc Amstell is a BAFTA nominated, award-winning English comedian, television presenter, screenwriter and actor, best known for his roles as former co-host of Popworld, former host of Never Mind the Buzzcocks and co-writer and star of the sitcom Grandma's House.-Early life:Amstell was born...
, Aslan
Aslan
Aslan, the "Great Lion," is the central character in The Chronicles of Narnia, a series of seven fantasy novels for children written by C. S. Lewis. He is the eponymous lion of The Lion, the Witch and the Wardrobe, and his role in Narnia is developed throughout the remaining books...
, Des Bishop
Des Bishop
Des Bishop is an Irish comedian and was brought up in New York. He is now primarily based in Ireland, after moving to County Wexford in 1990 at the age of 14.-Approach to Comedy:...
, Jason Byrne
Jason Byrne (comedian)
Jason Byrne is an Irish comedian born in Ballinteer, Dublin, Ireland. In August 2008, he made his twelfth Edinburgh Fringe Festival appearance and is a regular at the Kilkenny Cat Laughs comedy festival....
, Damien Dempsey
Damien Dempsey
Damien Dempsey is an Irish singer and songwriter who mixes traditional Irish folk with contemporary lyrics to deliver social comment on the positive and negative aspects arising from Ireland's Celtic Tiger society.-Early life:...
, The Dubliners
The Dubliners
The Dubliners are an Irish folk band founded in 1962.-Formation and history:The Dubliners, initially known as "The Ronnie Drew Ballad Group", formed in 1962 and made a name for themselves playing regularly in O'Donoghue's Pub in Dublin...
, The Frames
The Frames
The Frames are an Irish band based in Dublin. Founded in 1990 by Glen Hansard, the band has been influential in the Dublin rock music scene. The group has released six albums...
, Kíla
Kíla
Kíla are an Irish folk music/World music group, originally formed in 1987 in the Irish Language secondary school, Coláiste Eoin in Co. Dublin. Kila's blend of Irish traditional music and World Music with a modern rock sensibility is generally credited with breathing new life into contemporary Irish...
, Christy Moore
Christy Moore
Christopher Andrew "Christy" Moore is a popular Irish folk singer, songwriter, and guitarist. He is well known as one of the founding members of Planxty and Moving Hearts...
, Moving Hearts
Moving Hearts
Moving Hearts is an Irish folk-rock band formed in 1981. They followed in the footsteps of Horslips in combining Irish traditional music with rock and roll, and also added elements of jazz to their sound.-Career:...
, Mundy
Mundy
Mundy is an Irish singer-songwriter. 'Mundy' is a nickname given to Enright, as it not only refers to his name Edmund, but it is how he pronounces the word "Monday".-Biography:...
, Josh Ritter
Josh Ritter
Josh Ritter is an American singer-songwriter, guitarist and author who performs and records with The Royal City Band. Ritter is known for his distinctive Americana style and narrative lyrics. In 2006 he was named one of the "100 Greatest Living Songwriters" by Paste magazine.- Early life :Josh...
, Tommy Tiernan
Tommy Tiernan
Tommy Tiernan is an Irish comedian, actor and writer. He and Hector Ó hEochagáin present The Tommy and Hector Show on i102-104FM. Tiernan also featured in Father Ted.-Early life:...
, Neil Young
Neil Young
Neil Percival Young, OC, OM is a Canadian singer-songwriter who is widely regarded as one of the most influential musicians of his generation...

Vicar Street has been awarded the Live Music Venue of the Year Award, in the national and Dublin-based categories of the IMRO
Irish Music Rights Organisation
Irish Music Rights Organisation is the collecting society for songwriters, composers and music publishers of Ireland. Its role is to act as an agent for its members in order to collect license fees whenever their musical works are performed in public, broadcast or transmitted, and to pay out...
awards, for two years running in 2009 and 2008 – the first two years of the IMRO Music Venue Awards . In addition in 2008, it also received the Hot Press Readers Award for Best Live Music Venue in Ireland .