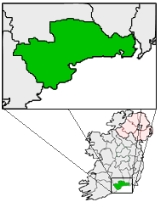 Waterford is a city in the South-East Region
South-East Region, Ireland
The South-East Region is a NUTS Level III region of Ireland and is governed by the South-East Regional Authority. It consists of the area under the jurisdiction of the county councils of counties Carlow, Kilkenny, South Tipperary, Wexford, and Waterford along with Waterford City Council. The...
of Ireland
Republic of Ireland
Ireland , described as the Republic of Ireland , is a sovereign state in Europe occupying approximately five-sixths of the island of the same name. Its capital is Dublin. Ireland, which had a population of 4.58 million in 2011, is a constitutional republic governed as a parliamentary democracy,...
. It is the oldest city in the country and fifth largest by population. Waterford City Council
Waterford City Council
Waterford City Council is the local authority which is responsible for the city of Waterford and its immediate hinterland in Ireland. The Council is responsible for Housing and Community, Roads and Transportation, Urban planning and Development, Amenity and Culture, and Environment.The Chairman ...
is the local government authority for the city and its immediate hinterland. The population of the city in 2006 was 49,213; of which 45,748 lived within the city limits, and 3,465 lived in the suburbs in County Kilkenny
County Kilkenny
County Kilkenny is a county in Ireland. It is part of the South-East Region and is also located in the province of Leinster. It is named after the city of Kilkenny. The territory of the county was the core part of the ancient Irish Kingdom of Osraige which in turn was the core of the Diocese of...
.
The city is situated at the head of Waterford Harbour
Waterford Harbour
Waterford Harbour is a natural harbour at the mouth of the Three Sisters; the River Nore, the River Suir and the River Barrow in Ireland. It is navigable for shipping to both Waterford and New Ross. The Port of Waterford is capable of accommodating vessels up to 32,000 tons dwt...
(Irish
Irish language
Irish , also known as Irish Gaelic, is a Goidelic language of the Indo-European language family, originating in Ireland and historically spoken by the Irish people. Irish is now spoken as a first language by a minority of Irish people, as well as being a second language of a larger proportion of...
: Loch Dá Chaoch or Cuan Phort Láirge).

How many cementarys are there in waterford
More
x