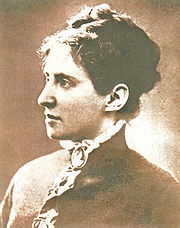 Charlotte Garrigue Masaryk (November 20, 1850 in Brooklyn
Brooklyn
Brooklyn is the most populous of New York City's five boroughs, with nearly 2.6 million residents, and the second-largest in area. Since 1896, Brooklyn has had the same boundaries as Kings County, which is now the most populous county in New York State and the second-most densely populated...
, New York, USA – May 13, 1923 Lány) was the wife of the Czechoslovak philosopher, sociologist, politician
Politician
A politician, political leader, or political figure is an individual who is involved in influencing public policy and decision making...
and president
President
A president is a leader of an organization, company, trade union, university, or country.Etymologically, a president is one who presides, who sits in leadership...
Tomáš Garrigue Masaryk, the first President of Czechoslovakia
Czechoslovakia
Czechoslovakia or Czecho-Slovakia was a sovereign state in Central Europe which existed from October 1918, when it declared its independence from the Austro-Hungarian Empire, until 1992...
.
She was born to a Unitarian
Unitarianism
Unitarianism is a Christian theological movement, named for its understanding of God as one person, in direct contrast to Trinitarianism which defines God as three persons coexisting consubstantially as one in being....
family with Huguenot
Huguenot
The Huguenots were members of the Protestant Reformed Church of France during the 16th and 17th centuries. Since the 17th century, people who formerly would have been called Huguenots have instead simply been called French Protestants, a title suggested by their German co-religionists, the...
ancestry on her father's side and having a Mayflower
Mayflower
The Mayflower was the ship that transported the English Separatists, better known as the Pilgrims, from a site near the Mayflower Steps in Plymouth, England, to Plymouth, Massachusetts, , in 1620...
passengers' descent on her mother's one.

In 1877 visiting a friend studying at a conservatory in Leipzig
Leipzig
Leipzig Leipzig has always been a trade city, situated during the time of the Holy Roman Empire at the intersection of the Via Regia and Via Imperii, two important trade routes. At one time, Leipzig was one of the major European centres of learning and culture in fields such as music and publishing...
, Germany
Germany
Germany , officially the Federal Republic of Germany , is a federal parliamentary republic in Europe. The country consists of 16 states while the capital and largest city is Berlin. Germany covers an area of 357,021 km2 and has a largely temperate seasonal climate...
, she first met her future husband Tomáš Masaryk who was staying there after having gained his doctorate at the University of Vienna
University of Vienna
The University of Vienna is a public university located in Vienna, Austria. It was founded by Duke Rudolph IV in 1365 and is the oldest university in the German-speaking world...
. They married a year later in the USA, after which they settled in Vienna
Vienna
Vienna is the capital and largest city of the Republic of Austria and one of the nine states of Austria. Vienna is Austria's primary city, with a population of about 1.723 million , and is by far the largest city in Austria, as well as its cultural, economic, and political centre...
. After the wedding her husband added her surname
Surname
A surname is a name added to a given name and is part of a personal name. In many cases, a surname is a family name. Many dictionaries define "surname" as a synonym of "family name"...
into his name
Name
A name is a word or term used for identification. Names can identify a class or category of things, or a single thing, either uniquely, or within a given context. A personal name identifies a specific unique and identifiable individual person, and may or may not include a middle name...
thus becoming Tomáš Garrigue Masaryk, as he is remembered in the Czech Republic
Czech Republic
The Czech Republic is a landlocked country in Central Europe. The country is bordered by Poland to the northeast, Slovakia to the east, Austria to the south, and Germany to the west and northwest....
and Slovakia
Slovakia
The Slovak Republic is a landlocked state in Central Europe. It has a population of over five million and an area of about . Slovakia is bordered by the Czech Republic and Austria to the west, Poland to the north, Ukraine to the east and Hungary to the south...
(or often by the abbreviation TGM). In 1881 the Masaryks moved to Prague
Prague
Prague is the capital and largest city of the Czech Republic. Situated in the north-west of the country on the Vltava river, the city is home to about 1.3 million people, while its metropolitan area is estimated to have a population of over 2.3 million...
, where Tomáš obtained a professorship at the University of Prague
Charles University in Prague
Charles University in Prague is the oldest and largest university in the Czech Republic. Founded in 1348, it was the first university in Central Europe and is also considered the earliest German university...
.
Of the couple's six children, four of them reached adulthood - Alice
Alice Masaryková
Alice Masaryková, or Alice Garrigue Masaryk , was one of the founding members of the Czechoslovak Red Cross and was a Czech sociologist. She was born in Vienna, the first child of the future founder and first president of Czechoslovakia, Tomas Garrigue Masaryk and his American wife Charlotte. The...
, Herbert, Olga and Jan
Jan Masaryk
Jan Garrigue Masaryk was a Czech diplomat and politician and Foreign Minister of Czechoslovakia from 1940 to 1948.- Early life :...
, who later became a noted Czechoslovakia
Czechoslovakia
Czechoslovakia or Czecho-Slovakia was a sovereign state in Central Europe which existed from October 1918, when it declared its independence from the Austro-Hungarian Empire, until 1992...
n diplomat
Diplomat
A diplomat is a person appointed by a state to conduct diplomacy with another state or international organization. The main functions of diplomats revolve around the representation and protection of the interests and nationals of the sending state, as well as the promotion of information and...
and politician
Politician
A politician, political leader, or political figure is an individual who is involved in influencing public policy and decision making...
.

In the era before the First World War Mrs. Masaryk became involved in many social
Social
The term social refers to a characteristic of living organisms...
, humanitarian and cultural activities of Prague society. She joined the Social Democratic Party
Czech Social Democratic Party
The Czech Social Democratic Party is a social-democratic political party in the Czech Republic.-History:The Social Democratic Czechoslavonic party in Austria was founded on 7 April 1878 in Austria-Hungary representing the Kingdom of Bohemia in the Austrian parliament...
; however she (in agreement with her husband) rejected the Marxist
Marxism
Marxism is an economic and sociopolitical worldview and method of socioeconomic inquiry that centers upon a materialist interpretation of history, a dialectical view of social change, and an analysis and critique of the development of capitalism. Marxism was pioneered in the early to mid 19th...
doctrine of the class struggle
Class struggle
Class struggle is the active expression of a class conflict looked at from any kind of socialist perspective. Karl Marx and Friedrich Engels wrote "The [written] history of all hitherto existing society is the history of class struggle"....
.

After the outbreak of the First World War, her husband left for exile with their daughter Olga to seek international support for the independence of the nations of the Austrian-Hungarian monarchy
Austria-Hungary
Austria-Hungary , more formally known as the Kingdoms and Lands Represented in the Imperial Council and the Lands of the Holy Hungarian Crown of Saint Stephen, was a constitutional monarchic union between the crowns of the Austrian Empire and the Kingdom of Hungary in...
, notably the Czechs and Slovaks
Slovaks
The Slovaks, Slovak people, or Slovakians are a West Slavic people that primarily inhabit Slovakia and speak the Slovak language, which is closely related to the Czech language.Most Slovaks today live within the borders of the independent Slovakia...
. For the majority of the war, Mrs. Masaryk was under police supervision, while daughter Alice was even under arrest. The situation became even worse when son Herbert died of typhus in 1915. All of these hardships caused Charlotte Masaryk to suffer from depression
Clinical depression
Major depressive disorder is a mental disorder characterized by an all-encompassing low mood accompanied by low self-esteem, and by loss of interest or pleasure in normally enjoyable activities...
and cardiac
Heart
The heart is a myogenic muscular organ found in all animals with a circulatory system , that is responsible for pumping blood throughout the blood vessels by repeated, rhythmic contractions...
problems.

In December 1918 Tomáš Garrigue Masaryk returned to Prague as the President of Czechoslovakia. The family began living at the Prague Castle
Prague Castle
Prague Castle is a castle in Prague where the Kings of Bohemia, Holy Roman Emperors and presidents of Czechoslovakia and the Czech Republic have had their offices. The Czech Crown Jewels are kept here...
, often spending time at the chateau
Château
A château is a manor house or residence of the lord of the manor or a country house of nobility or gentry, with or without fortifications, originally—and still most frequently—in French-speaking regions...
of Lány.