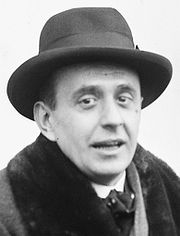 Jan Garrigue Masaryk was a Czech
Czechoslovakia
Czechoslovakia or Czecho-Slovakia was a sovereign state in Central Europe which existed from October 1918, when it declared its independence from the Austro-Hungarian Empire, until 1992...
diplomat
Diplomat
A diplomat is a person appointed by a state to conduct diplomacy with another state or international organization. The main functions of diplomats revolve around the representation and protection of the interests and nationals of the sending state, as well as the promotion of information and...
and politician
Politician
A politician, political leader, or political figure is an individual who is involved in influencing public policy and decision making...
and Foreign Minister of Czechoslovakia from 1940 to 1948.

In September 1938 the so-called Sudetenland
Sudetenland
Sudetenland is the German name used in English in the first half of the 20th century for the northern, southwest and western regions of Czechoslovakia inhabited mostly by ethnic Germans, specifically the border areas of Bohemia, Moravia, and those parts of Silesia being within Czechoslovakia.The...
of Czechoslovakia was occupied by German forces and Masaryk resigned as ambassador in protest, although he remained in London. Other government members including Beneš also resigned. In March 1939 Germany occupied the remaining parts of the Czech provinces of Bohemia and Moravia
Protectorate of Bohemia and Moravia
The Protectorate of Bohemia and Moravia was the majority ethnic-Czech protectorate which Nazi Germany established in the central parts of Bohemia, Moravia and Czech Silesia in what is today the Czech Republic...
, and a puppet Slovak state was established in Slovakia
Slovakia
The Slovak Republic is a landlocked state in Central Europe. It has a population of over five million and an area of about . Slovakia is bordered by the Czech Republic and Austria to the west, Poland to the north, Ukraine to the east and Hungary to the south...
. When a Czechoslovak Government-in-Exile was established in Britain in 1940, Masaryk was appointed Foreign Minister. During the war he regularly made broadcasts over the BBC
BBC
The British Broadcasting Corporation is a British public service broadcaster. Its headquarters is at Broadcasting House in the City of Westminster, London. It is the largest broadcaster in the world, with about 23,000 staff...
to occupied Czechoslovakia. He had a flat at Westminster Gardens, Marsham Street in London but often stayed at the Czechoslovak Chancellery residence at Wingrave
Wingrave
Wingrave is a village in Buckinghamshire, England located about four miles north east of Aylesbury and three miles south west of Wing.The civil parish is called Wingrave with Rowsham within Aylesbury Vale district and incorporates the hamlet of Rowsham.Wingrave is twinned with La Bouëxière in...
or with President Beneš at Aston Abbotts
Aston Abbotts
Aston Abbotts is a village and civil parish within Aylesbury Vale district in Buckinghamshire, England. It is situated about four miles north of Aylesbury and three miles south west of Wing. The parish had a population of 404 according to the 2001 census.The village name 'Aston' is a common one...
, both near Aylesbury in Buckinghamshire
Buckinghamshire
Buckinghamshire is a ceremonial and non-metropolitan home county in South East England. The county town is Aylesbury, the largest town in the ceremonial county is Milton Keynes and largest town in the non-metropolitan county is High Wycombe....
. In 1942 Masaryk received an LL.D. from Bates College
Bates College
Bates College is a highly selective, private liberal arts college located in Lewiston, Maine, in the United States. and was most recently ranked 21st in the nation in the 2011 US News Best Liberal Arts Colleges rankings. The college was founded in 1855 by abolitionists...
.

On March 10, 1948 Masaryk was found dead, dressed in his pajamas, in the courtyard of the Foreign Ministry below his bathroom window. The initial investigation stated that he had committed suicide by jumping out of the window, although for a long time it has been believed by some that he was murdered by the nascent Communist government. In a second investigation taken in 1968 during the Prague Spring
Prague Spring
The Prague Spring was a period of political liberalization in Czechoslovakia during the era of its domination by the Soviet Union after World War II...
, Masaryk's death was ruled an accident, and a third investigation in the early 1990s after the Velvet Revolution
Velvet Revolution
The Velvet Revolution or Gentle Revolution was a non-violent revolution in Czechoslovakia that took place from November 17 – December 29, 1989...
also concluded that it had been suicide.

Despite the outcomes of all three investigations, discussions about the mysterious circumstances of his death continued for some time. Those who believe that Masaryk was murdered called it the Third Defenestration of Prague, and point to the presence of nail marks on the window sill from which Masaryk fell, as well as smearings of feces and Masaryk's stated intention to leave Prague the next day for London. Members of Masaryk's family—including his former wife, (Frances Crane Leatherbee), a former in-law named Sylvia E. Crane, and his sister Alice Masaryková
Alice Masaryková
Alice Masaryková, or Alice Garrigue Masaryk , was one of the founding members of the Czechoslovak Red Cross and was a Czech sociologist. She was born in Vienna, the first child of the future founder and first president of Czechoslovakia, Tomas Garrigue Masaryk and his American wife Charlotte. The...
—stated their belief that he had indeed killed himself, according to a letter written by Sylvia E. Crane to The New York Times, and considered the possibility of murder a "cold war cliché". A Prague police report in 2004 concluded after forensic research that Masaryk had indeed been thrown out the window to his death. This report was seemingly corroborated in 2006 when a Russian journalist claimed that his mother knew the Russian intelligence officer who threw Masaryk out the window.

The highest-ranking Soviet Bloc intelligence defector, Lt. Gen. Ion Mihai Pacepa
Ion Mihai Pacepa
Ion Mihai Pacepa is the highest-ranking intelligence official ever to have defected from the former Eastern Bloc. He is now a United States citizen, a writer, and a columnist....
, described his conversation with Nicolae Ceauşescu
Nicolae Ceausescu
Nicolae Ceaușescu was a Romanian Communist politician. He was General Secretary of the Romanian Communist Party from 1965 to 1989, and as such was the country's second and last Communist leader...
, who told him about "ten international leaders the Kremlin killed or tried to kill". Jan Masaryk was one of them.

In the Spring of 1948 there was a rumour in Prague that the Soviet NKVD was responsible for the death of Jan Masaryk. NKVD Major Augustin Schramm
Augustin Schramm
Major Augustin Schramm was a ethnic German Czechoslovak communist professional and NKVD agent. He was a member of the Central Committee of the Communist Party of Czechoslovakia in 1930s...
, who was involved with the Czechoslovak intelligence and secret communist police, was according to that rumour responsible for Masaryk's death. Schramm was shot dead in his Prague flat on 27 May 1948, a possible "silencing" of an inconvenient witness, for which the NKVD and/or KGB were famous. Two young Czech philosophy students were arrested, tortured and later executed for shooting Major Schramm. They were Milan Choc, who, in spite of torture by the Czech secret police, denied any involvement in the shooting to the end. The other youth was Sadek, of whom little is known.

From 1924 until their divorce in 1931, Masaryk was married to Frances Crane Leatherbee. She was an heiress to the Crane piping, valves and elevator fortune, the former wife of Robert Leatherbee, a daughter of Charles R. Crane, a U.S. minister to China, and a sister of Richard Teller Crane 2nd, a U.S. ambassador to Czechoslovakia. By that marriage, he had three stepchildren: Charles Leatherbee, Robert Leatherbee Jr., and Richard Crane Leatherbee. Stepson Charles Leatherbee (Harvard 1929) co-founded the University Players
University Players
The University Players was primarily a summer stock theater company located in West Falmouth, Cape Cod, Massachusetts, from 1928 to 1932. It was formed in 1928 by eighteen college undergraduates...
, a summer stock company in Falmouth, Massachusetts
Falmouth, Massachusetts
Falmouth is a town in Barnstable County, Massachusetts, United States; Barnstable County is coextensive with Cape Cod. The population was 31,531 at the 2010 census....
, in 1928 with Bretaigne Windust
Bretaigne Windust
Bretaigne Windust was a French-born theatre, film, and television director.-Early life:He was born Ernest Bretaigne Windust in Paris, France, the son of English violin virtuoso Ernest Joseph Windust and singer Elizabeth Amory Day from New York City...
. He married Mary Lee Logan, younger sister of Joshua Logan
Joshua Logan
Joshua Lockwood Logan III was an American stage and film director and writer.-Early years:Logan was born in Texarkana, Texas, the son of Susan and Joshua Lockwood Logan. When he was three years old his father committed suicide...
, who became one of the co-directors of the University Players in 1931.

Masaryk was a skilled amateur pianist. In that capacity, he accompanied Jarmila Novotná
Jarmila Novotná
Jarmila Novotná was a celebrated Czech soprano and actress and, from 1940 to 1956, a star of the Metropolitan Opera.-Early career:...
in a recital of Czech folk songs issued on 78 RPM records to commemorate the victims of the Nazi eradication of Lidice
Lidice
Lidice is a village in the Czech Republic just northwest of Prague. It is built on the site of a previous village of the same name which, as part of the Nazi Protectorate of Bohemia and Moravia, was on orders from Reichsführer-SS Heinrich Himmler, completely destroyed by German forces in reprisal...
.

Foreword by Madeleine Albright
Madeleine Albright
Madeleine Korbelová Albright is the first woman to become a United States Secretary of State. She was appointed by U.S. President Bill Clinton on December 5, 1996, and was unanimously confirmed by a U.S. Senate vote of 99–0...
The source of this article is wikipedia, the free encyclopedia.  The text of this article is licensed under the GFDL.